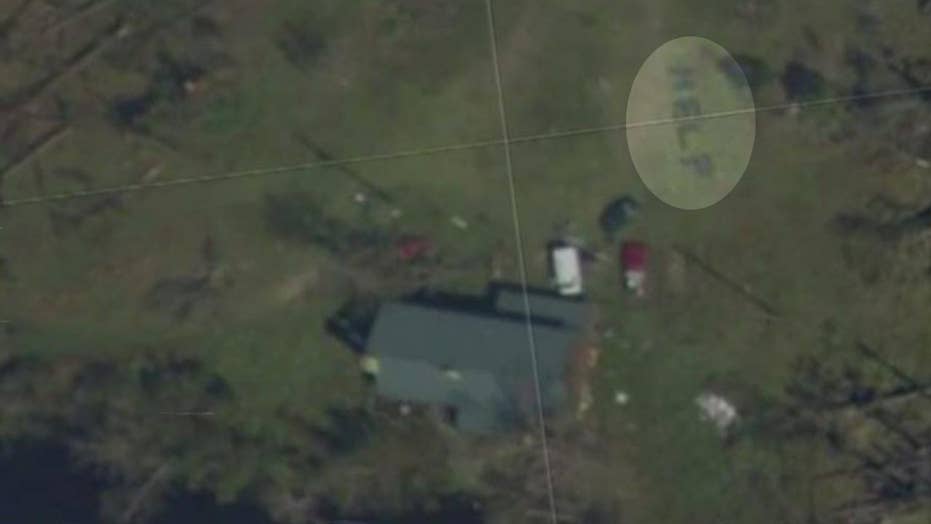 A call for help by a Florida family after Hurricane Michael left devastation across the state's Panhandle region was answered on Saturday thanks to a woman's keen eye when scanning satellite data.

Amber Gee was scanning the National Oceanic and Atmospheric Administration's interactive aerial map to check in on damage to her grandmother's property when something stuck out in particular to her.

"I was checking on damages in the area on houses that belong to my family and I came across my grandma's house," Gee told ABC News. "And they had the word H-E-L-P written out in the yard."

Gee had thought her grandmother and other two relatives had evacuated before the Category 4 storm with 155 mph winds made landfall in Mexico Beach and roared across Florida's Panhandle into Georgia, flattening trees and damaging structures in its wake.

Satellite images showed part of Mexico Beach, Fla., before and after Hurricane Michael made landfall. (AP)

Her uncle, his wife, and a friend of theirs had ended up staying at the house in Youngstown, located 20 miles northeast of Panama City, and became trapped due to "a lot of downed trees" near the home.

"Luckily enough, my uncle who was staying there and was thinking outside of the box wrote the word H-E-L-P out," she told ABC News.

Gee then contact the Bay County Emergency Management, who sent deputies to the home and rescued the group.

A member of a South Florida urban search and rescue team sifts through a debris pile for survivors of hurricane Michael in Mexico Beach, Fla., Sunday, Oct. 14, 2018. (AP Photo/David Goldman)

At least 18 deaths have been attributed to the storm, which has left behind damage that Federal Emergency Management Agency chief Brock Long said is the some of the worst he's ever seen.

NUMBER OF DEAD AFTER HURRICANE MICHAEL MAY RISE; RESCUERS COMB THROUGH RUBBLE

Drone footage captures some of the devastation left behind by Hurricane Michael. The category 4 storm damaged property and killed at least 18 people.

Thousands of people are likely to be without power on Florida's Panhandle for at least another week, as power restoration continues.

In neighboring Georgia, emergency officials said Sunday that approximately 120,000 customers in the state remain without power after in Michael's wake.

President Trump is set to visit Florida and areas affected by Hurricane Michael on Monday.