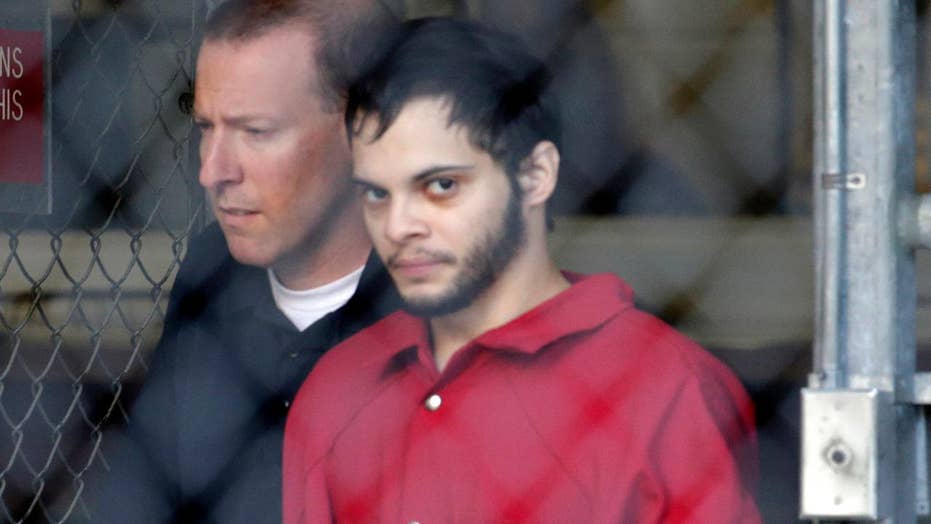 FORT LAUDERDALE, Fla. – One by one, a judge detailed the 22 charges against an Alaskan man accused of killing five people and wounding six others in the Florida airport shooting spree. Then, Esteban Santiago pleaded not guilty.

Santiago, 26, stood in chains Monday in a red "max custody inmate" jumpsuit as U.S. Magistrate Judge Barry Seltzer took the unusual step of reading the entire 17-page indictment aloud in court -- with repeated emphasis on the victims' names. After each count, Santiago said he understood and was asked if he realized he could get the death penalty if convicted.

Santiago, an Iraq war veteran who lived in Anchorage, Alaska, was taken into custody shortly after investigators say he opened fire in a baggage claim area Jan. 6 at Fort Lauderdale-Hollywood International Airport.

According to the FBI, Santiago flew on a one-way ticket from Alaska to Fort Lauderdale with a 9mm Walther handgun and two ammunition clips in a case in checked luggage. Authorities say he picked up the case, loaded the gun in a bathroom and came out firing randomly at other travelers.

Santiago was arrested after firing 15 shots. The FBI says he told agents he did the shooting because of some form of government mind control, later saying he was inspired by videos and chatrooms linked to the Islamic State.

The indictment contains no terrorism-related charges despite those claims. It's also not clear why Santiago came to Fort Lauderdale.

Records at the Alaska Psychiatric Institute show Santiago was given anti-anxiety medications but no prescriptions for drugs that would treat serious mental conditions such as schizophrenia. He was released after a five-day stay with no restrictions that might prevent him from possessing a gun, and his weapon was returned by police. That same gun was used in the airport shooting.

A trial date has not yet been set.