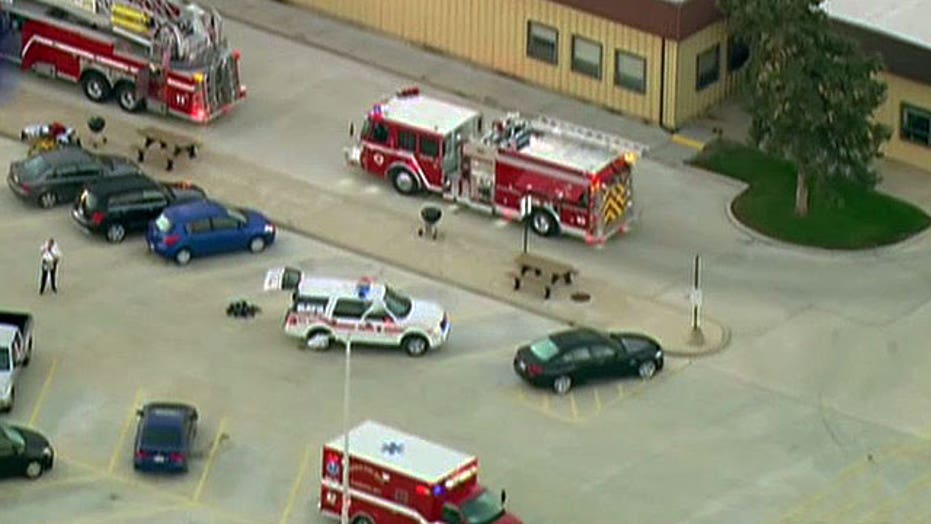 Authorities believe the blaze was intentionally set by a contractor at FAA radar center as part of suicide attempt; no link to terrorism suspected

CHICAGO – All flights in and out of Chicago's two airports were halted Friday after a fire at a suburban air traffic control center that authorities said was deliberately set by a contract employee.

The ground stoppage at two of the nation's busiest airports sent delays and cancellations rippling through the U.S. air travel network. More than 850 flights were canceled in Chicago alone.

Authorities had no immediate information on a possible motive but emphasized that the Federal Aviation Administration contractor was authorized to be at the site and had no ties to terrorism.

By midday, a few flights began taking off and landing again at O'Hare and Midway airports after a nearly five-hour gap. But the planes were moving at a much-reduced pace, officials said, and no one could be sure when full service would resume.

The early morning fire forced the evacuation of the control center in Aurora, about 40 miles west of downtown Chicago. Emergency crews found the man suspected of setting the fire in the basement, where the blaze began, with self-inflicted knife wounds as well as burns to his body, said Thomas Ahern, a spokesman for the Bureau of Alcohol, Tobacco, Firearms and Explosives, which was taking part in the investigation. He was taken to a hospital.

The man used gasoline as an accelerant, and there was fire damage to some wiring in the building, as well as water damage from the sprinkler system, Ahern said.

The FBI, the FAA and local police and fire departments were also investigating, interviewing witnesses and other employees.

Another employee of the facility was treated at the scene for smoke inhalation. The flames were extinguished by 7 a.m., according to Aurora spokesman Dan Ferrelli.

When the center was evacuated, management of the region's airspace was transferred to other facilities, according to FAA spokeswoman Elizabeth Cory. Flights that were already on approach to Chicago were allowed to continue at a slower pace.

The shutdown quickly spread travel misery around the country, with airports as close as Milwaukee and as far as Dallas canceling flights. Online radar images showed a gaping hole in the nation's air traffic map over the upper Midwest.

Passengers already in the air who thought they were going to Chicago wound up elsewhere. Some of Southwest's Midway-bound planes returned to their point of origin while others diverted to Indianapolis, Cleveland, Columbus, Louisville and Pittsburgh, spokeswoman Brandy King said.

John Kois, 36, of Seattle, had planned to spend a weekend with his girlfriend in Detroit when he got stranded at O'Hare. The financial analyst cut his losses and decided to rent a car and drive the four hours.

"What are you going to do?" said Kois, waiting to retrieve bags he had checked in before the flights were cancelled. "You make the best of it."

At O'Hare's Terminal 3, long lines formed at ticket counters as airlines continued to check in passengers.

Waiting by an American Airlines counter, Jon Sciarrini said his homebound flight to Dallas had been delayed, and he didn't know whether he should wait or try to arrange another flight.

"It's pretty frustrating -- a little like being in purgatory," the IT specialist said.

It was the second time since May that a problem at one of the Chicago area's major control facilities prompted a ground stop at O'Hare and Midway international airports.

In May, an electrical problem forced the evacuation of a regional radar facility in suburban Elgin. A bathroom exhaust fan overheated and melted insulation on some wires, sending smoke through the facility's ventilation system and into the control room.

That site was evacuated for three hours, and more than 1,100 flights were canceled.

The Aurora facility, known as an enroute center, handles aircraft flying at high altitudes, including those approaching or leaving Chicago airports. Air traffic closer to the airports is handled by a different facility and by the control towers located at the airfields.

A computer glitch at a similar facility on the West Coast in April forced a 45-minute shutdown at Los Angeles International Airport.