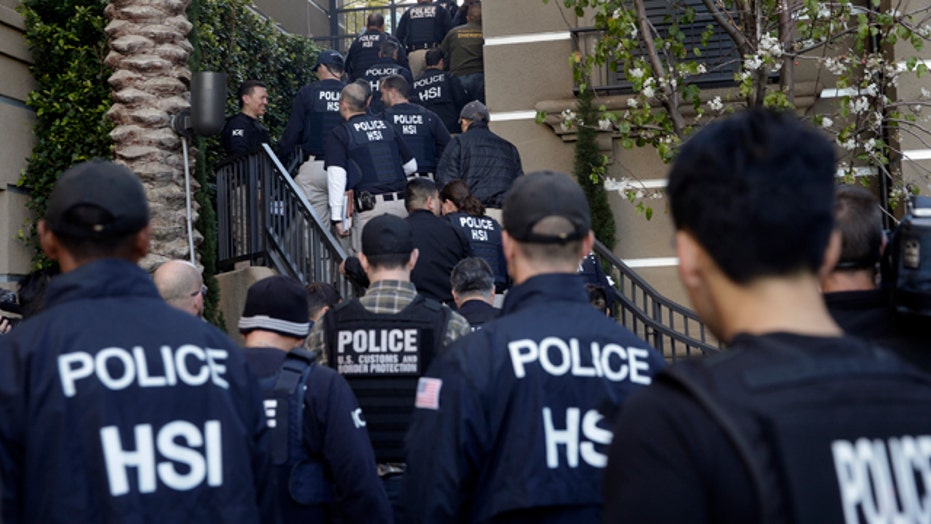 DHS cracking down on birth tourism

DHS cracks down on women who travel to the U.S. to give birth, granting their children U.S. citizenship

Airfare from the U.S. to China and a months-long stay in an Orange County, Calif., apartment: $80,000. A baby born a U.S. citizen: priceless.

In the largest operation of its kind, early Tuesday morning federal officials in Southern California served warrants at "Chinese birthing houses" or "maternity hotels," where wealthy Chinese nationals paid up to $80,000 for the sole purpose of giving birth in the U.S. to obtain citizenship for their children, earning in-state tuition to U.S. universities for them and permanent U.S. residency for the parents.

"We were coached through the entire process. What to wear, what to say, how to stay under the radar."

"It is essentially citizenship for sale," said Center for Immigration Studies analyst Jessica Vaughan. "Something U.S. citizens hold very dear and cherish is essentially being purchased by people for their own economic self-interests or potentially more nefarious purposes."

Birth tourism is big business. An estimated 40,000 babies are born to couples posing as tourists each year. The U.S. is one of the few countries in the world that automatically grants citizenship to any child born here, regardless of the parents’ nationality. While it is not against the law, lying to obtain a visa to enter the U.S. under false pretense is illegal.  Companies offering to help foreign nationals give birth in the U.S. operate openly on the Internet, promising a U.S. passport, birth certificate and Social Security number for their newborn. Prices range from $8,000 to $80,000, depending on the services. Wealthy couples from China, the Middle East, Africa and South Korea predominate the trade.

According to an affidavit filed Tuesday in federal court, Department of Homeland Security investigators posed as Chinese nationals wanting a relative in Beijing to have a child in the U.S. Agents met with Chao Chen and Jie Zhu, a husband and wife in Orange County, Calif., who gave the undercover agent a tour of the Caryle Apartments near John Wayne Airport. According to the document, 17 to 20 apartments are all rented in Chen's name. Each unit contains one or two pregnant Chinese nationals who paid Chen and Zhu from "$40,000 to $80,000" for a package deal that includes transportation to and from the airport, visits to the grocery store, restaurants, entertainment and prenatal visits to a physician.

It also includes fraud. The "niece" living in China provided Chen's associates a resume that showed no college education, a low income and few family ties. Chen's company, 'You Win USA Vacation Resort' changed the information to appear more acceptable to the U.S. Consulate, which granted her application for a business visa. She also was told not to reveal her pregnancy and how to conceal it when she arrived at customs in the U.S. The agent also was routed through Honolulu "for a higher success rate," since officials at LAX were already on alert to potential "birth tourism" fraud.

"We were coached through the entire process," a federal source told Fox News. "What to wear, what to say, how to stay under the radar."

According to the affidavit, Li advised the undercover agent "not to go to get her visa too late, if her stomach is too big she won't be able to get the visa." In addition, LI said "they can coach her on how to get through customs."

In February, agents visited the 'You Win USA Travel' website. It contains photos of a classroom-style presentation featuring a slideshow, with images whose titles included: "American Baby" and "What you need to know to get an ID."

During the search warrant, agents hope to obtain evidence of visa fraud, marriage fraud and tax evasion. Documents show Chen and Zhu claimed to have divorced in 2012, then entered into sham marriages in Las Vegas a few months later with U.S. citizens, allowing both to obtain lawful U.S. residency. Both then paid off their purported U.S. citizen spouses, in one case $10,000 in a series of 16 bank deposits.

Chen and his business associate, Dong Li, "earn hundreds of thousands of dollars in income from their visa fraud scheme," according to court documents, yet Li filed no tax return and Chen filed a false return. Neither cited their foreign bank accounts as required by law. Chen drives a $200,000 Bentley, his wife a luxury BMW.

Investigators focused on three companies specializing in birth tourism fraud. In Orange County, the pregnant Chinese nationals tell hospital admission officials they're indigent, sticking U.S. taxpayers with the cost of their babies, "which often exceed $25,000," according to court records.

"We're creating a group of sort of pseudo citizens who live overseas, but can take advantage of the fact that they are U.S. citizens on paper," says Vaughan. "There is no question this is a threat to our national interest at worst. At best, it is something very distasteful because it cheapens U.S. citizenship."