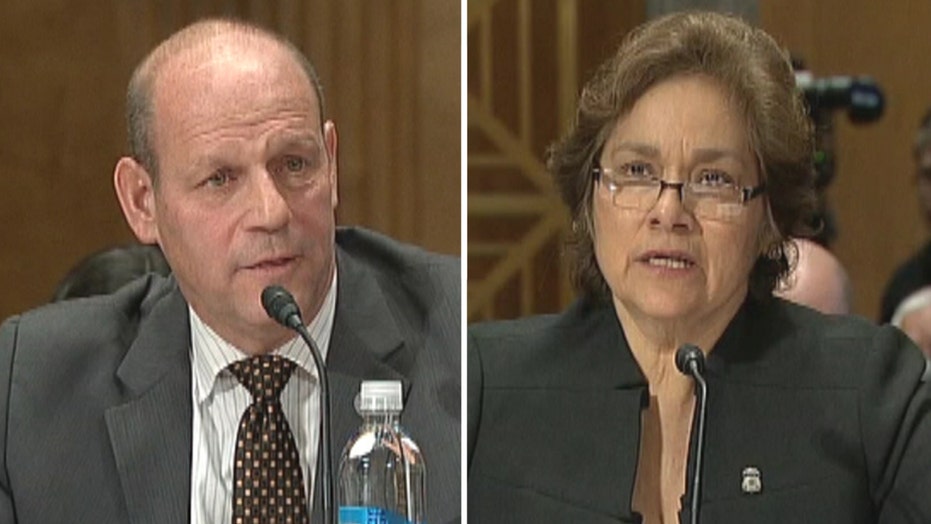 The federal bureaucrat who blocked armed law enforcement agents from apprehending a man involved in the San Bernardino terror attack last December, then allegedly lied to investigators about her actions, has been reassigned to another post, but likely won't face further investigation, FoxNews.com has learned.

The U.S. Citizenship and Immigration Services supervisor who an Inspector General’s report did not name but blasted for keeping Department of Homeland Security agents from Enrique Marquez is Irene Martin, who, according to her Linkedin.com account, has been with the agency for at least 16 years, 13 years as a field supervisor.

Marquez and his Russian wife Mariya Chernykh were scheduled for an interview with Martin’s staff on Dec. 3, the day after Marquez’s friend Syed Rizwan Farook and his wife, Tashfeen Malik, killed 14 people at an office Christmas party. After the FBI learned Marquez allegedly supplied the guns, they sent five armed Homeland Security Investigation agents to the USCIS building to detain Marquez.

Homeland Security Investigations is part of Immigration and Customs Enforcement (ICE), which, like U.S. Citizenship and Immigration Services, is part of DHS. Martin refused to allow the agents access to Marquez.

It is not clear what disciplinary action Martin could face, but the report last week faulted her for making agents wait more than 90 minutes before she gave them access to related files on the suspected terrorist, and then she dismissively ordered them to hand copy files, according to the federal report. Agents told building security they intended to arrest Marquez to prevent him from killing anyone, but Martin had them wait 30 minutes just to see her. When questioned by IG investigators later, Martin repeatedly changed her story and also contradicted what other witnesses said.

Jeff Carter, chief of media relations for USCIS, told FoxNews.com late Monday that "to his knowledge there is no further investigation into Martin," and her transfer become acting deputy district director was planned before the audit was released.

Martin, who formally oversaw San Bernardino and Riverside as well as Los Angeles counties, did not return emails to FoxNews.com. USCIS in California referred calls to its Washington headquarters, where officials refused to comment. However, experts and former law enforcement agents told FoxNews.com Martin’s actions amounted to obstruction of justice.

“The USCIS field director’s behavior was not only outrageous and reprehensible, but in violation of federal law and policy that ensure any law enforcement agency the ability to make arrests or conduct interviews in government facilities,” said Jessica Vaughan, of the Center for Immigration Studies, a Washington-based research institute. “I cannot imagine any possible excuse for her actions, and it is doubly concerning that she apparently lied to the investigators about what she did. She needs to be fired, not to mention prosecuted.”

Although Marquez was only a “person of interest” a day after the attack, authorities were frantically trying to track down anyone associated with Farook and Malik. Both Farook and Malik were killed by law enforcement after their morning attack.

“When agents show up to CIS for a criminal investigation, they should never be impeded. That is obstruction of justice,” said Claude Arnold, retired special agent in charge for ICE’s Los Angeles bureau of Homeland Security Investigations.

Martin is not named in the Inspector General report released June 1, but large portions of the 9-page report to Congress are dedicated to documenting the field supervisor’s actions. Internal sources confirmed Martin’s identity and the USCIS web site still lists her as the field supervisor.

“When interviewed by OIG, the field office director denied telling the agents they were not allowed to arrest, detain, or interview anyone in the building,” the report states. “However, her account is contradicted by that of the other HSI agents present.

“She also gave inconsistent answers about when she discovered that the HSI agents were investigating the shootings from the day prior….Either version is contradicted by the building security officer….”

“It is pretty standard across the federal government that if someone engages in criminal misconduct related to their professional duties, it is also a removable offense,” he said.

The report notes Martin had no authority to hold up the agents who were justifiably concerned that Marquez and Chernykh may pose a threat to the occupants and visitors of the USCIS facility. Marquez, who is now in jail and awaiting trial on charges related to supplying the guns as well as marriage fraud, has pleaded not guilty.

“The DHS was created to unify and improve coordinated efforts to defend our homeland. Refusing to allow armed ICE agents into a USCIS facility to detain a suspected terrorist just a day after a deadly terrorist attack is disturbing,” Johnson told FoxNews.com. “It is my hope that the DHS takes this incident seriously and improves its coordination so that something like this never happens again. The safety of all Americans depends on it.”