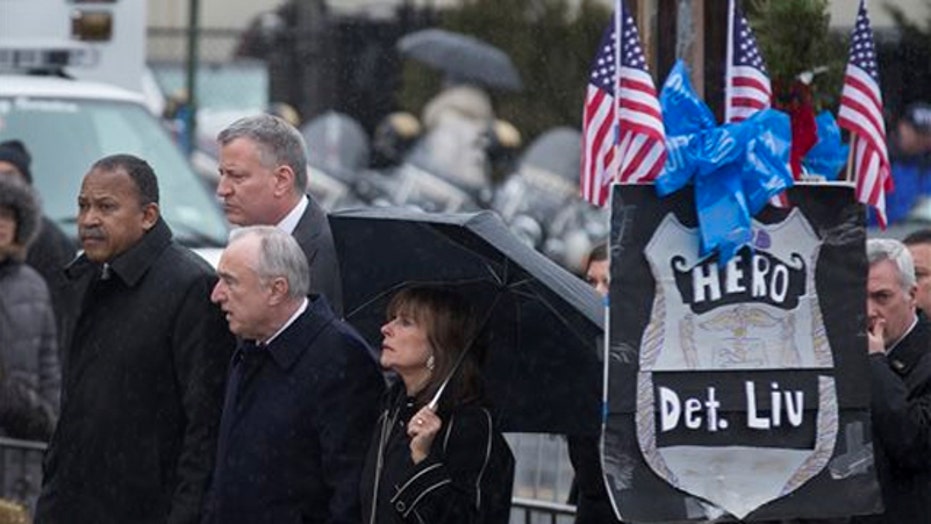 Family, dignitaries gather for the wake of NYPD Officer Liu

Under gray skies and a light rain, New York City offered a final salute to Wenjian Liu, the NYPD officer who was murdered with fellow Officer Rafael Ramos as they sat in their squad car on a Brooklyn street.

Liu, 32, was on the force seven years when he was murdered on December 20, just two months after he was married.

Liu’s wife, parents and other family members were joined by thousands of NYPD officers at Aievoli Funeral Home in Dyker Heights for the funeral service.

Msgr. Robert J. Romano, an NYPD chaplain, opened the service with a Buddhist saying: "When you are born, you cry, and the world rejoices. When you die, you rejoice, and the world cries."

"Our hearts are broken, our eyes are filled with tears," the monsignor said, as he offered prayers for Detective Liu, as well as Liu’s family and his fellow officers at the 84th Precinct in Brooklyn.

"They are our heroes and they will be missed," Romano said of Liu and Ramos.

Liu’s father, who broke down during an emotional speech, described the funeral as the "saddest day of his life."

"Even though he left us early, I believe that he is still with us," she said. "His spirit will continue to look after us."

One of Liu’s cousins said one of his earliest memories of Wenjian -- known to many as "Joe" -- was when he was shown a sticker book shortly after Wenjian arrived in America at the age of 12.

The cousin said he liked a Statue of Liberty sticker that Liu had, but he refused to give it to him. After the cousin started crying, Liu handed over the sticker.

"To stop me from crying he gave me the first souvenir he bought when he came to America," the cousin said.

New York City Mayor Bill de Blasio said that "all of this city wants to lift up the Liu family and the Ramos family and always remember their sacrifice.

"Liu walked a path of courage, a path of sacrifice, a path of kindness. It was who he was and he was taken from us much too soon," de Blasio added.

Outside the funeral home, hundreds of city police officers turned their backs on de Blasio as he spoke, despite calls from police commissioner William Bratton not to do so. Police union officials have accused the mayor of fostering a climate of mistrust that contributed to the killings of Officer Liu and his partner.

"The mayor has no respect for us. Why should we have respect for him?" said retired New York Police Department Detective Camille Sanfilippo, who was among those who turned their backs Sunday. Retired NYPD Sgt. Laurie Carson called the action "our only way to show our displeasure with the mayor."

Officers spun back around when Bratton took the podium to speak. Later, de Blasio stood stoically outside the funeral home, to no visible reaction from officers, observing an honor guard and other rituals.

The mayor described Liu as a family man who would enjoy his time off fishing, sharing his hauls with aunts, uncles and his family.

In his high school years, Liu would stop playing basketball with his friends early to buy groceries and go home to cook his parents dinner.

Liu knew his family would worry about him joining the city’s police department, but reassured them every day about his safety.

"At the end of every workday, he called his father to tell him and to tell the family he was safe and was on his way home," de Blasio said.

The mayor said other police officers learned from Liu by his actions, such as one time he was called to help an elderly man who had fallen down in his home.

After Liu lifted up the man -- a Vietnam army veteran -- into a chair, he sensed his time at the man’s home wasn’t over, as the man wanted to talk about his younger days.

So Liu poured the veteran a glass of soda and listened to his stories before tucking him into bed.

For seven years, Liu "sought out the suffering, the disturbed, the injured and tried to bring them comfort," Bratton said.

Yesterday, mourners lined up for blocks on a cold, rainy day for Liu's wake.

"This is a really tragic story," Gov. Andrew Cuomo told reporters following the wake, held just two days after the death of his own father, former Gov. Mario Cuomo.

"This is really pointless. It had nothing to do with them," he said of Liu and Ramos. "They did nothing wrong. ... It was pure and random hatred."

The shooter, Ismaaiyl Brinsley, killed himself shortly after the brazen daytime ambush on a Brooklyn street.

Investigators say Brinsley was an emotionally disturbed loner who had made references online to the killings this summer of unarmed black men at the hands of white police officers, vowing to put "wings on pigs."

The deaths strained an already tense relationship between city police unions and de Blasio, who union leaders have said contributed to an environment that allowed the killings by supporting protests following the deaths of Eric Garner on Staten Island and Michael Brown in Ferguson, Missouri.

Many people, including Cardinal Timothy Dolan, have since pressed all parties to tone down the rhetoric. And this weekend, Police Commissioner William Bratton sent a memo to all commands urging respect, declaring "a hero's funeral is about grieving, not grievance."

After Sunday's show of disdain, Patrolmen's Benevolent Association President Patrick Lynch said officers "have a right to have our opinion heard, like everyone else that protests out in the city" and noted that officers turned their backs outside the service. The mayor got a respectful reception among police officials inside.

On Saturday, officers standing outside the Brooklyn funeral home where Liu was displayed, dressed in full uniform in an open casket, saluted as the mayor and commissioner entered.

Liu's funeral arrangements were delayed so relatives from China could travel to New York. He is to be buried at Cypress Hills Cemetery.

On Saturday, a small vigil was established in Chinatown and community members gathered, burning pieces of paper in honor of Liu in keeping with Chinese tradition.