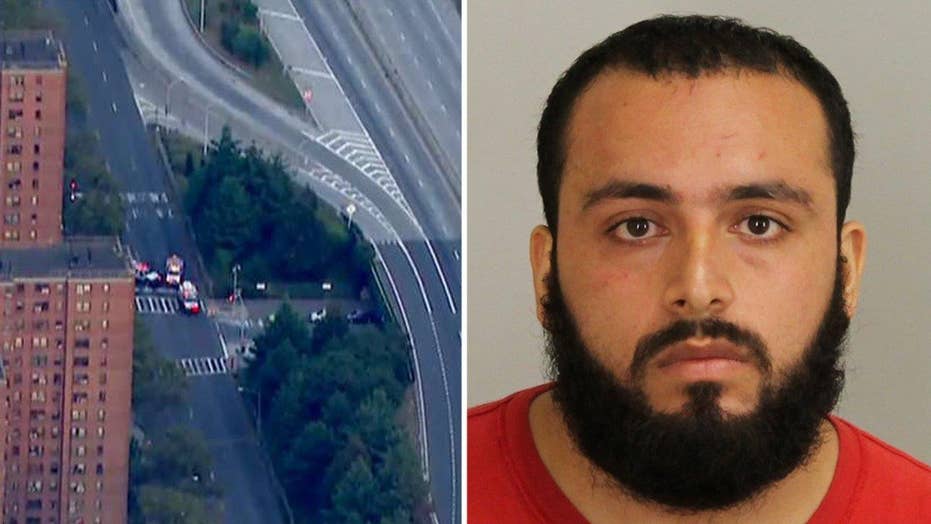 Pages from the bloody journal of the New York and New Jersey bombing suspect Ahmad Khan Rahami show he was a follower of Al Qaeda as well as the Islamic State terror group, yet federal investigators made no reference to ISIS in their complaint charging him on Tuesday.

One image of a page from Rahami's journal was revealed during a House Homeland Security Committee hearing.

At least two pages include references to Anwar al-Awlaki -- the American-born Muslim cleric who was killed in a 2011 drone strike and whose preaching has inspired acts of terror linked to ISIS and Al Qaeda. Federal investigators mentioned Awlaki in the complaints.

However, the journal also appears to reference Abu Muhammad al Adnani -- the ISIS spokesman killed by coalition forces in August after he called his followers to attack non-believers in their homelands.

"I looked for guidance came Sheikh Anwar, Brother Adnani, Dawla. Said it clearly – Attack the kuffar (non-believer) in the back yard," one section read. Page 12 of the complaint references this section without naming Adnani.

Rahami's screed also praised 9/11 mastermind Usama bin Laden and Nidal Hasan, the former Army officer who went on a deadly shooting rampage in 2009 at Fort Hood, Texas.  Hasan was also a follower of Awlaki. The Counter Extremism Project’s research counted 77 extremists — 43 U.S. extremists and 34 European extremists — with ties to Anwar al-Awlaki. They include the Pulse nightclub shooter Omar Mateen in June, as well as Syed Farook, one of the shooters in the San Bernardino massacre in December 2015.

This page mentions bin Laden and a "pressure cooker bomb."

In addition, the journal included rantings plotting revenge against the U.S. government for slaughtering Muslim holy warriors. In one section, the Afghan-born Rahami suggested he was worried police or the feds would capture him before he could carry out a suicide attack, becoming a martyr. "The sounds of bombs will be heard in the streets," the journal declared.

Another section included a reference to "pipe bombs" and a "pressure cooker bomb" and declared: "In the streets they plan to run a mile," an apparent reference to one of the blast sites, a charity run in Seaside Park. The feds said the journal ended with the words: "Death to your oppression."

This page ends: "Death to your OPPRESSION."

The pages appeared to be pierced by a bullet from the shootout that ended with Rahami in handcuffs on Monday. He's suspected of planting bombs in Seaside Park and Elizabeth, New Jersey, as well as New York City, where the feds said at least 31 people were wounded after an explosion Saturday night.

Fox News has asked the U.S. Attorney’s office and the Department of Justice to explain why Rahami wrote about ISIS in his journal, but unlike the other terrorists he cited, there was no reference to ISIS in the complaint.

A law enforcement official later downplayed the fact that Adnani was not mentioned in the complaint. This individual suggested that more charges against Rahami are likely to come in an indictment – and to that end -- this individual would not rule out the possibility that a reference to the Islamic state may be included in an indictment, once the case is brought to a grand jury.