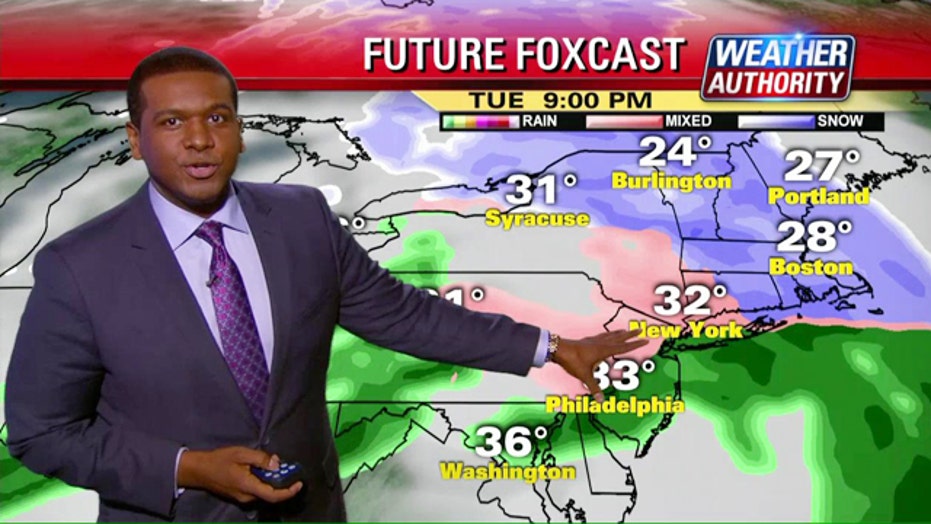 Yeah, March, we get it: you come in like a lion. But don't even big cats take naps?

The eastern half of the U.S. braced for yet another round of punishing winter weather Tuesday, with snow and freezing temperatures already hitting the northeast. Right behind it was a wave of heavy snowfall, freezing rain and potentially record-setting low temperatures that was poised to hammer a swath stretching from east Texas to the Mid-Atlantic region later this week.

"It's kind of a 1-2 punch coming up here," Michael Musher, a National Weather Service meteorologist, told FoxNews.com on Tuesday.

Round 1 was already in effect late Tuesday in New York and Boston, where up to four inches of snow, sleet and freezing rain were expected overnight in what is already a record-setting winter for the white stuff in Beantown.

But the main event was poised to strike the Midwest beginning Wednesday morning, when freezing rain was expected to descend on the southern plain states. As temperatures transform rain into snow throughout the day, parts of the region, including Louisville, Ky., Cincinnati, Charleston, W.V. and Pittsburgh could see six to 12 inches, Musher said. Meanwhile, a corridor stretching from Washington, D.C. and Baltimore up to New York City could get another six inches by the time the event pushes out on Thursday.

In Washington, House Majority Leader Kevin McCarthy canceled a session scheduled for Thursday two days in advance due to the inclement weather.

And although Friday is predicted to be relatively precipitation-free, an arctic front will slam into the eastern half of the country, Musher said. Morning low temperatures in the Ohio River Valley, the Tennessee Valley and the Mid-Atlantic region could dip down to the single digits, where they could not only threaten records for March 6, but also for the entire month of March.

The latest round of winter misery is especially disheartening for Bostonians, who have already suffered under what is officially the snowiest winter on record. Musher said 99.4 inches had already fallen in December, January and February, shattering the previous record of 81.5 inches set in the winter of 1993-94, and 104.1 inches have fallen in the region beginning in late 2014.

Organizers of Boston's annual St. Patrick's Day Parade say the event will go on as planned March 15, despite the eight-and-a-half feet of snow that has fallen on the city this winter — but they are asking for help in clearing the route.

Meanwhile, the Boston-area transit system was considering ways to compensate customers for weeks of weather-related delays and breakdowns.

A Massachusetts Bay Transportation official told The Associated Press on Tuesday that the options included a week of free fares, which he estimated would cost the agency $6 million. Other possibilities include rebates or discounts for monthly pass holders, or letting customers with monthly passes use them for another month.

The Massachusetts Department of Transportation board was expecting to vote next week on whether to approve any of the plans. Officials estimate the cost to the transit system of the winter storm cleanup at $36.5 million so far.

Fortunately, some good news lies ahead. Forecasters predict temperatures in the eastern half of the country will return to more seasonable norms early next week; in New York, for instance, they could reach into the mid-40s.

"I think we just have to get through the next few days here and the weekend," Musher said.