Brigadier General Michael Heston has been placed on Home Hospice Care after ending treatment for Stage IV Pancreatic Cancer. His family believes it was his exposure to burn pits while he served in Afghanistan that led to his terminal illness. (Courtesy of the Heston Family)

The family of a top-ranking official from the Vermont National Guard says that an aggressive form of pancreatic cancer has left him with only a short time to live and that his dire situation is due to his exposure to burn pits while he served overseas.

Brigadier General Michael T. Heston, who also was one of the highest ranking members of his state's National Guard when he served as Assistant Adjutant General, completed a total of three tours in Afghanistan from 2003 to 2012. Each time, he was exposed to the toxic clouds that emanated from burn pits-- a system of waste disposal, used on military bases, where everything from plastics to batteries to appliances to medical and human waste was thrown into open-air dumps, doused with jet fuel, and set ablaze. At nearly every single base where Heston was stationed, active burn pits were near their barracks and other common areas.

Less than a decade since he returned from service, Heston is now fighting terminal Stage IV pancreatic cancer.

“He had been in treatment until this past September,” Heston’s wife, June, said in an interview with Fox News. “He stopped chemo [therapy] and then started radiation treatment until two weeks ago, when they told him that there was nothing more that they can do.”

“I feel like once they told him, he’s been very ill. There’s no treatment left for him.”

Heston (right) was one of the most decorated and highest ranking officers in Vermont's Army National Guard. (Courtesy of the Heston family.)

Heston, who also was a Vermont State Trooper and is currently in home hospice care, commanded at all levels throughout his 34-year career, starting with platoons and working his way up to brigades. He returned in 2012 and started feeling symptoms in March 2016. What started as back pain turned out to be cancer, but June says it took nearly 10 months for him to get a proper diagnosis.

“They spent months trying to figure it out,” she says. “They didn’t give him the test that would have shown his cancer.”

June adds that they went to Brigham and Women's Hospital in Boston, where he finally got the diagnosis that he and his family feared.

“They said it was a rare form of cancer. Where have we heard that before?” June asked, referring to the number of veterans who fell ill after being exposed to burn pits.

Tens of thousands of veterans reportedly believe their health has been compromised by the polluting smoke expelled from burn pits on their bases. 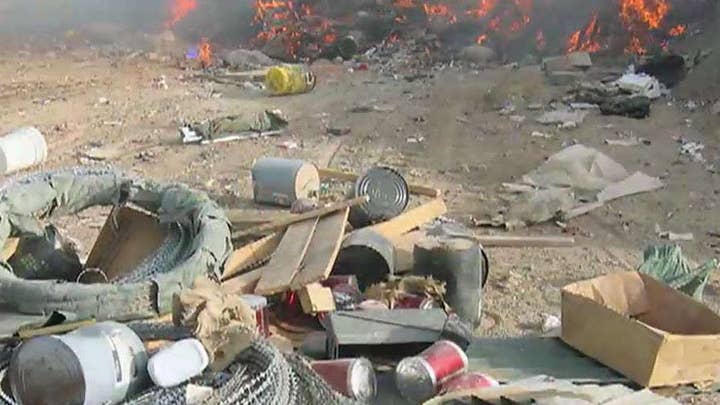 The burn pit method was originally a temporary measure during the wars in both Iraq and Afghanistan as a way to quickly dispose of waste and garbage on military installations. The vets claim their prolonged exposure to toxic air left tens of thousands of them, as well as private contractors, with a myriad of illnesses including various forms of cancer and severe respiratory issues. Many succumbed to their illness, but nearly all who feared they got sick from exposure to burn pits never received proper help from the country they went to war to defend.

A registry was created by the Veterans Administration in 2011, but signing it does not guarantee any form of assistance. Service members and their families concerned with the effects of burn pit exposure say they struggle to keep up with the high cost of medical treatments. There are more than 140,000 names signed to the VA registry.

Heston was one of those veterans who signed the registry and urged others to do so, as well.

Heston's Wife June and their children, Dr. Kelsey Heston, 26 and Keegan, 22, (L-R) are tending to their father after he recently stopped treatment and returned home for hospice care. (Courtesy of the Heston Family)

“He put out a note to all his soldiers to sign up for that registry,” his wife said. “He was big on that. He always said that if the VA created a registry, we know we have a problem.”

Heston and his family initially had trouble navigating claim filings with the Pentagon and the Veterans Administration.

“He was denied a claim from the Defense Department, but luckily, the VA accepted and he has gotten a disability claim,” June said, adding that she is sharing her husband’s story in hopes that it will help those veterans who were not as fortunate.

“We were one of the lucky ones, but what about all those vets who weren’t so lucky?”

June and her family are now waiting for the worst and say that many other veterans and their families will continue to deal with this new reality.

“The rate of cancer is higher among veterans when compared to other people,” she said.

Senator Patrick Leahy, D-Vt., and vice chairman of the Senate Appropriations Committee, where he has worked on the issue, said, “Mike Heston has been a dedicated public servant and the very definition of a true leader as long as I have known him. True to form, he has transformed his own difficult personal struggle with cancer into a fight for the men and women of the Vermont National Guard and throughout the nation who may be suffering from exposure to airborne hazards from burn pits.”