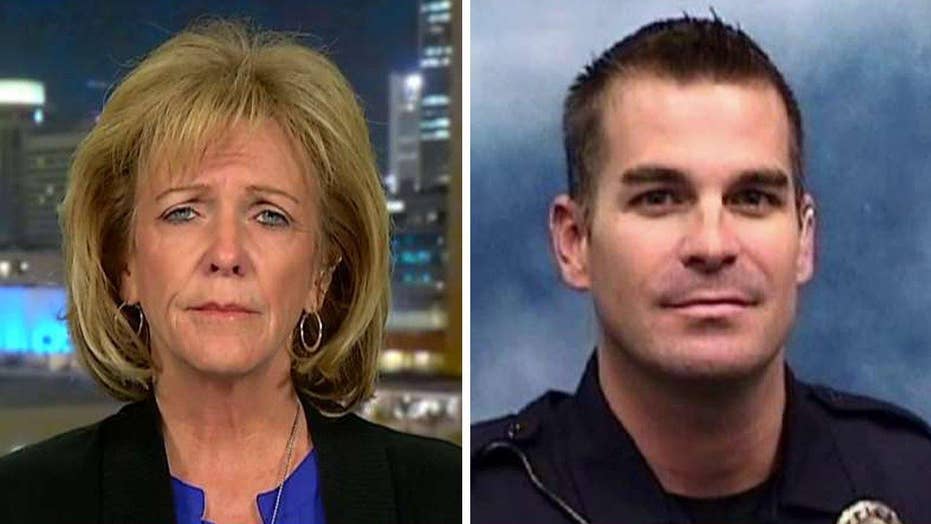 Mother of officer killed by illegal on immigration debate

In the five years since an unlicensed illegal immigrant ran down his son, Don Rosenberg has turned his anger and grief into a mission to answer a seemingly simple question: How many people are killed each year by drivers who don’t belong in the U.S., much less behind a wheel?

Drew Rosenberg, a 25-year-old student at Golden Gate University, was riding his motorcycle in San Francisco when Roberto Galo struck him on Nov. 16, 2010. In his frenzied effort to flee the scene, Galo ran over his victim twice. The elder Rosenberg got the news no parent should hear from San Francisco General Hospital that night, but what he would learn over the next few years only compounded his bitterness.

As many as 7,500 Americans -- 20 per day -- are killed annually by unlicensed drivers, and Rosenberg calculates that more than half are the victims of illegal immigrants. Now, by testifying before lawmakers, speaking to parents who have been through the same ordeal and posting his research on his nonprofit’s website, unlicensedtodrive.org, Rosenberg is shedding light on a frightening number not readily available from government sources.

“Our archives are filled with stories of drunk-driving illegals killing U.S. citizens.”

“I was stunned at what I found,” said Rosenberg, who at 63 is semi-retired from the entertainment and publishing industry. “Not only were unlicensed drivers killing people in numbers only exceeded by drunk drivers, but many times they were barely being punished and many times faced no charges at all.”

Galo, a Honduran, who entered the country illegally but earned temporary protective status, had been cited five months earlier for driving without a license or insurance and heading the wrong way on a one-way street in San Francisco. His car was impounded for a day, he paid a fine for the moving violation and the other charges were dropped.

Drew Rosenberg, (l.), was killed by a man his father Don, (r.), believes should not have been in the country. (Courtesy: Don Rosenberg)

After he was convicted of manslaughter, Galo served six weeks in jail and was released. He was deported in 2013 after a years-long legal battle.

Because state and federal highway safety officials do not classify deaths by the perpetrator’s immigration stats, tabulating the deadly toll of unlicensed, illegal immigrant drivers has been a painstaking effort.  Rosenberg has pored through spreadsheets and studies, piecing together numbers that show his son’s death was neither necessary nor unique. Still, his estimate is just that, and it varies from the guesses of other groups.

“I’ve learned over time that many jurisdictions do not cite license status or immigration status when reporting these statistics, so if anything, the numbers are understated,” he said. “For example, San Francisco doesn’t report either criteria, so Drew’s death defaults to having been killed by a licensed driver who was a citizen.”

Such imprecise government bookkeeping masks a frightening and, critics say, preventable danger. The AAA Foundation for Traffic Safety, which obtains state-by-state data from the federal government Fatality Analysis Reporting System (FARS) database – found that 20 percent of fatal crashes involved an unlicensed driver. From 2010-2014, there was an average of 32,887 road deaths per year, which would mean 6,577 were caused by unlicensed drivers. Those drivers include citizens with suspended or revoked licenses, and those who never had licenses. But if half are illegal immigrants, it would be in line with Rosenberg’s estimates.

“Our archives are filled with stories of drunk-driving illegals killing U.S. citizens,” William Gheen, of the Americans for Legal Immigration Political Action Committee, told FoxNews.com. “It is our official estimate that more than 3,000 U.S citizens lose their lives each year due to the insufficient enforcement of our existing border and immigration law.”

Brandon Mendoza was a 32-year-old, Mesa, Ariz., policeman in 2014 when an unlicensed, illegal immigrant driver drove drunk the wrong way on a freeway and killed him. Raul Silva-Corona had been convicted of criminal conspiracy in Colorado 20 years earlier, but never deported.

Mendoza’s mother believes the government could make the roads safer by at least deporting illegal immigrants who have been convicted of crimes.

“I don't believe it's reality to be able to get all of the illegals out of the country, but I do believe we need to get the criminal element out of here and secure the border so that they cannot continue to keep coming back,” Mary Ann Mendoza said.

Like Rosenberg, Mendoza has turned her grief into activism, starting a memorial foundation to continue her fallen son’s legacy and urging policymakers to take the issue more seriously.

“Until you have lost a loved one to an illegal criminal, you will never truly understand the other side of this issue,” she said.

“With at least 11.4 million unauthorized immigrants in the United States, it can be surmised that a large population drive a vehicle on a regular basis,” Boughey said, adding that enforcing laws already on the books should mean deportation for illegal immigrants caught driving without valid licenses.

When government agencies do acknowledge the danger posed by unlicensed drivers, including illegal immigrants, they often use the information to further a pro-illegal immigrant agenda, say critics.

In the wake of a 2013 study by the California Department of Motor Vehicles that concluded that unlicensed drivers are almost three times as likely to cause a deadly car accident as a licensed driver, Gov. Jerry Brown signed legislation allowing illegal immigrants to obtain driver’s licenses. California, which was believed to have 2 million unlicensed drivers prior to passage of the law, is now one of a dozen states to allow the controversial practice.

"The best way to ensure safety on our nation's roads is to make sure everyone who drives has passed a driver's exam, and has a license and insurance,” he said. “The last thing states and localities want is for their law enforcement and emergency teams to arrive at roadside accidents where drivers are uninsured and where injured persons arrive at hospitals unable to pay."

But Gheen and other critics say those who combat the problem of unlicensed drivers by awarding them licenses have it backward. A better solution, he said, is enforcing existing immigration law to the point that people are no longer encouraged to “enter and remain in the U.S. illegally.”

Rosenberg, who describes himself as a “lifelong liberal,” said the circumstances surrounding his son’s death have left him bitter at the group he calls the “amnesty crowd.” He also wants illegal immigrants caught driving without a license to be deported.

“While I can sympathize with people who want to make their lives better, they can’t do it at the expense of others,” he said. “I am not angry at those who come here to try and better their life or their children’s, but it can’t be condoned or rewarded.”