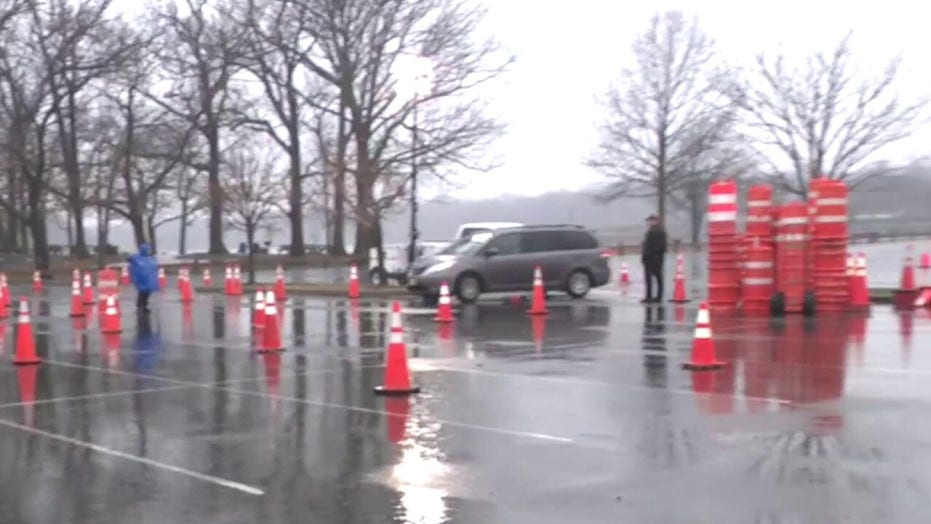 Drivers will remain in their cars and be swabbed by workers in hazmat suits; Alex Hogan reports from the scene.

New Yorkers woke up Friday in the city that never sleeps to a fast-spreading coronavirus pandemic — and to an empty Times Square, no Broadway shows, no Knicks and Nets basketball, no concerts or other large gatherings and deserted office buildings.

Subways and commuter trains were running but with significantly fewer riders.

A pedestrian wearing a face mask stops in Times Square, Thursday, March 12, 2020, in New York. New York City Mayor Bill de Blasio said Thursday he will announce new restrictions on gatherings to halt the spread of the new coronavirus in the coming days. For most people, the new coronavirus causes only mild or moderate symptoms. For some it can cause more severe illness. (AP Photo/John Minchillo)

The shows affected by the Broadway shutdown included such big hits as "Hamilton" and "To Kill a Mockingbird."

Next week’s historic St. Patrick’s Day parade down Fifth Avenue, an event that attracts two million people each year, was also a casualty of the coronavirus.

At the same time, restaurants and bars were noticeably emptier. So too Manhattan’s bustling sidewalks.

Many workers who fill Manhattan’s skyscrapers had been told to work from home Friday.

“People are scared to come outside,” said Justin Rahim, a tour guide at Manhattan’s Central Park, who said several of his pedicab drivers — reliant on tourists for their living — quit Thursday to drive for Uber's food delivery service. “It’s crazy. How am I going to survive this?”

The closures, cancelations and changes come as officials seek to contain the virus and mitigate the spread.

The number of confirmed coronavirus cases in New York City stayed at 95 as of Friday morning, officials said.

The total number of coronavirus cases in New York State was 328, second-most in the country behind Washington state which had 457 cases.

The Minskoff Theatre is shuttered Thursday, March 12, 2020, in New York, near Times Square after Broadway theaters closed following New York Gov. Andrew Cuomo's banning of gatherings of more than 500 people over concerns about the spread of the coronavirus. (AP Photo/Kathy Willens)

Nationally, there were at least 1,600 coronavirus cases in 47 states and DC.

Mayor Bill de Blasio, while pointing out the outbreak could last six months or longer, counseled against giving up.

“The city has to keep going,” de Blasio told Fox 5 New York Friday morning. “We need people to have their livelihoods. We need folks to show up at work. We need our public servants to be where we need them to be to take care of folks -- hospitals, schools, first responders.”

De Blasio said he didn't want to close public schools because of their importance to the communities they serve.

An exception was New Dorp High School on Staten Island, which was ordered closed Friday after a student tested positive for the corona virus, according to the Staten Island Advance.

The total number of people with the virus in New York City wasn't known due to the relative scarcity of tests.

But for some, the danger is all too real.

A pedestrian passes an entrance to the Barclays Center in the Brooklyn borough of New York on Thursday, March 12, 2020, after the NCAA's Atlantic 10 Conference Tournament was announced cancelled due to concerns over the COVID-19 coronavirus. (AP Photo/John Minchillo)

On Tuesday, John Brennan, a New Jersey resident and a horse trainer at Yonkers Raceway, just north of the city, was killed by the virus.

Two days later, a close colleague at the track, Standardbred Owners Association President Joseph Faraldo, said he was quarantined in his New York City home waiting for his own test results.

“He could have infected the entire paddock, because he had contact with everybody,” said Faraldo, who fell ill himself a week ago. He said he was tested Wednesday at a medical facility in Queens and expected to get the results back by Friday.

“I think I was pretty lucky," he said. “I wasn’t there more than 40 minutes. They asked a whole series of questions and I told them I was in the company of a person who had died from this. They were very nice.”