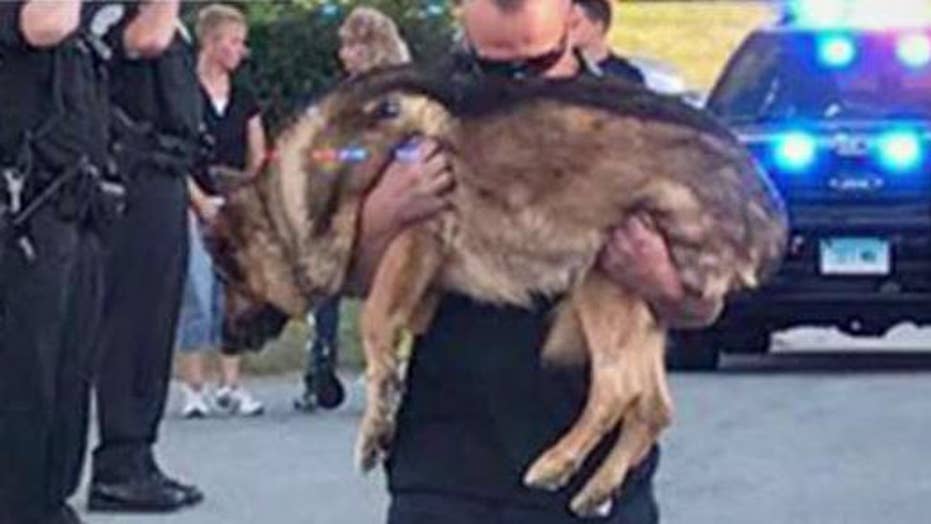 Officers line up for final salute to Hunter

Members of a Connecticut police department stood in line to salute a terminally ill four-legged partner on its last trip to a veterinary hospital.

K9 Hunter, a German shepherd, served with the Middletown Police Department at the side of its handler, Officer Michael D’Aresta. The dog was diagnosed with an aggressive form of liver cancer just recently.

Officers bid farewell to Hunter Friday as D'Aresta cradled the canine in his arms on the final trip to the vet, where the dog was euthanized.

“Officer Michael D'Aresta unfortunately has to make the toughest decision any K9 handler dreads making this evening at Pieper Olson in Middletown at 1830 hours,” Sgt. Doug Clark, Middletown K9 supervisor, wrote in a post on Facebook on Friday. “K9 Hunter has been ill for that past several days and when tests were conducted they revealed that K9 Hunter has a very aggressive form of Liver cancer. They unfortunately recommended that he be euthanized.”

“Officer D'Aresta and Hunter have been an exceptional team serving the City of Middletown in a high caliber since 2007,” Clark said. “So as you can imagine, this is extremely difficult for Mike and his family.”

Hunter’s value to the department was well-documented.

In July, the canine helped officers in a drug bust, the Middletown Patch reported.

Two years ago Hunter helped locate an elderly woman with dementia who wandered away from her home at night, the Hartford Courant reported.

“Hunter and Officer D'Aresta have been such a huge part of our department the past 10 years,” Clark wrote. “Such a dedicated K-9 team. It will never be the same. Rest in Peace Hunter you've done well. Our thoughts and prayers go out to Officer Michael D'Aresta and his family.”