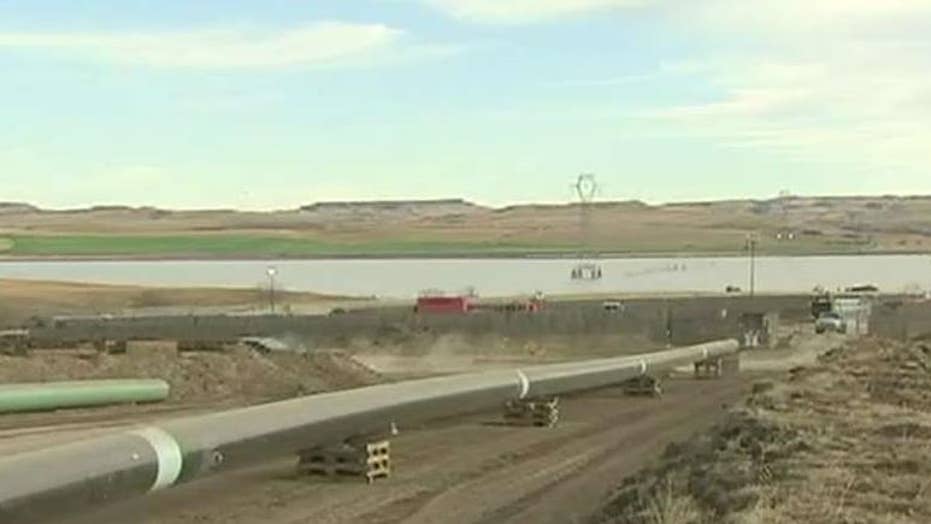 The company building the $3.8 billion Dakota Access pipeline is urging a federal court to speed up approval of its plan to lay pipe under a Missouri River reservoir, arguing Tuesday that further delays could add millions of dollars each month to the cost.

Dallas-based Energy Transfer Partners and a subsidiary turned to a judge for help to get final approval from Barack Obama's administration for the four-state pipeline rather than wait for President-elect Donald Trump, a pipeline supporter, to take office.

The Army Corps of Engineers referred a request for comment to the Justice Department, which did not immediately respond.

The Corps on Monday called for more study and input from the Standing Rock Sioux before it decides whether to allow the pipeline to cross under Lake Oahe. The 1,200-mile pipeline that's to carry North Dakota oil through South Dakota and Iowa to a shipping point in Illinois is largely complete except for that stretch, which will skirt the tribe's reservation. The tribe says the pipeline threatens drinking water and cultural sites.

The Corps in July granted Energy Transfer Partners the permits needed for the project, but it said in September that further analysis was warranted, given the tribe's concerns. Its announcement Monday came amid speculation that federal officials were on the brink of approving the crossing. ETP last week began preparing equipment to bore under the river.

The company said in court documents that the delay has already cost it nearly $100 million, "and further delay in the consideration of this case would add millions of dollars more each month in costs which cannot be recovered."

ETP disputes that the pipeline would endanger the tribe and Warren noted earlier that Army Assistant Secretary Jo-Ellen Darcy had informed company officials and Tribal Chairman Dave Archambault that the Corps' previous permit decisions "comported with legal requirements." ETP contends that the Corps has no legal justification for the delay.

Officers in riot gear responded. There were no immediate reports of arrests.

Mandan is about 50 miles north of a camp where hundreds of protesters have gathered in recent months to oppose the pipeline. The camp was quiet early Tuesday, with many people having left for Mandan. Some people were erecting large tents with stoves in preparation for colder weather and snow forecast for later in the week.

Robert F. Kennedy Jr., who is an environmental attorney and president of the New York-based Waterkeeper Alliance, which seeks to protect watersheds worldwide, was expected to visit the camp Tuesday. Activists were also calling for demonstrations at Army Corps of Engineers offices and the offices of the banks financing the pipeline construction.