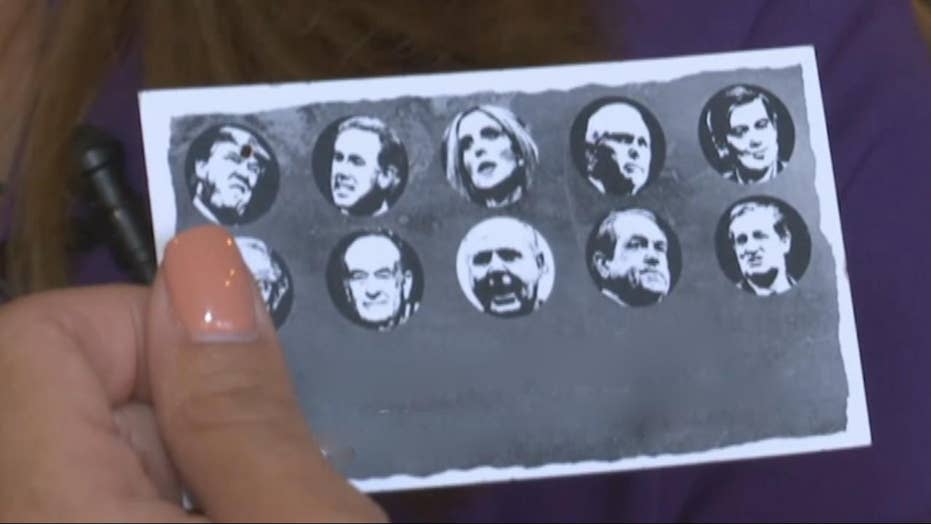 The loyalty card shows President Trump's head, which gets a hole punch when customers buy a coffee.

A Pennsylvania coffee shop is brewing up controversy with its loyalty card.

The front of the card has the typical 10-count with its logo to punch, but on the back - pictures of 10 people management does not like: Donald Trump, Rick Santorum, Ann Coulter, Mike Pence, Martin Shkreli, Pat Robertson, Bill O’Reilly, Rush Limbaugh, Mike Huckabee and Ted Cruz.

Black Forge Coffeehouse co-owner Nick Miller says the cards are designed to look like a shot in the head when the card is punched.

Co-owner Ashley Corts says she's had the loyalty cards since 2015 and recently updated the cards to include President Trump. She says it’s meant to poke fun at the president.

"We’re not threatening the president," Corts said. "We don’t want to physically hurt him, we do not condone any sort of hate. It’s completely against who we are."

Prior to the card's update, customers could find Glenn Beck, Creflo Dollar, Jerry Falwell and Billy Graham on the loyalty cards.

"They're practicing their freedom of expression," Matt Ticco Thornton told Fox News. "Their coffee shop’s been packed, and I know how hard it is for a small business to get noticed."

But not everyone likes the cards, Black Forge is getting threatening messages from all over the country, Corts told Fox News.

"It's no one from our state," she said while looking at the area codes while going through the shop's phone.

People also took to social media to post negative comments about the coffeehouse. A few tweeted about the lack of Democrats on the card, suggesting some additions.

Others were concerned about the President’s safety, Drake Bowan commented to Fox News via Facebook message “I honestly think they ought to have the secret secretive called in on them.  They are telling people that it's OK to [mimic] the idea of murder against the president.”

Duquesne University College Republicans Vice President Nicholas Lacono expressed dismay, writing in a Facebook message, “Seeing such violence and hate coming from the left because we are Republican/Conservative is despicable. I would like this country to unite on both sides of the aisle and this story is certainly not helping the cause.”

Corts said she has a message for the critics.

"Understand that we are people too," she said. "We respect you as a human as well."

Corts said the cards could get an update again in the future.