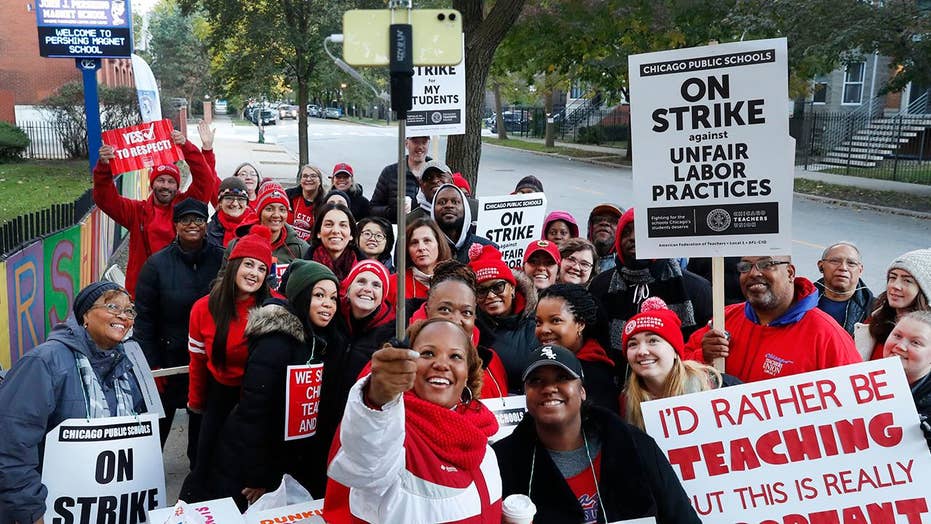 25,000 teachers walk out after months of negotiations; Mike Tobin reports from Chicago.

Teachers across Chicago hit the picket lines Thursday after months of union demands for better working conditions and smaller class sizes failed to materialize, a decision that canceled classes for more than 300,000 students.

The Chicago Teachers Union confirmed Wednesday night that its 25,000 members would not return to their classrooms until a new contract is agreed to.

The union had been negotiating disputes with Chicago Public Schools over pay and benefits, class sizes, and teacher preparation time for months. Picketing teachers said Thursday the walkout was about getting more resources and smaller class sizes in the cash-strapped district, not about putting more money in their pockets.

"It's ridiculous to say that you can put these kids who are dealing with profound poverty and profound homelessness in classes of 30-40 kids," said art teacher John Houlihan outside Smyth Elementary, a predominantly black and low-income school on the city's South Side."That's not manageable and it is not an environment for learning."

Chicago Teachers Union President Jesse Sharkey joined teachers picketing outside Helen Peirce International Studies school, where he said every kindergarten class has at least 30 students. He said there's "pent-up frustration" among union members about conditions in the schools, and the union wants some of those longstanding issues addressed in their next contract.

"As of right now, as of this moment, we have still not seen those promises in writing," Sharkey said. "That's important and frankly, it's important what the words actually are. We don't want a half measure, we want some of these basic conditions completely addressed."

Reactions among parents have been mixed, with some expressing support and others casting doubt on the teacher's true motivations. Parent Samantha Williams, 24, expressed some sympathy with the teachers’ claims but opined that strike had more to do with self-interest.

“I think it’s more about money,” Williams said. “I don’t think they had to go on strike.”

REBECCA FRIEDRICHS: TEACHERS, YOUR UNIONS MIGHT SUPPORT TRUMP’S IMPEACHMENT BUT THEY’VE ABANDONED YOU

But Jamel Boyd, a 51-year old-chef, shouted her support to teachers as she dropped off her 10-year-old-son and 8-year-old daughter at Smyth Elementary and accepts the teachers' explanation that the strike has less to do with getting the city to spend money on their salaries than it does spending money on improving schools.

"Kids are coming with all kinds of problems, anxiety, homelessness and these teachers need help, classroom support," said Boyd. "They need to stop beautifying Lake Shore Drive and do something for these people. Lake Shore Drive is beautiful enough."

Mayor Lori Lightfoot said she was disappointed by the union's decision to strike and voiced frustration about what she sees as the union's lack of urgency to make a deal.

"[W]hat we need is for the union to come back to the table to bargain in good faith, spend the time actually getting a deal done, face to face with us, and not off to the side in a caucus," she said in a statement. "If there is a seriousness of purpose and a willingness on the other side, we could get a deal done today."

District officials said they will keep all buildings open during school hours and staffed by principals and employees who usually work in administrative roles. Breakfast and lunch will be served, but all after-school activities and school buses are suspended.

Sharkey said it was "highly unlikely" a deal on all outstanding issues would be struck Thursday, though she said the district did provide some written language on class sizes that the union was still reviewing.