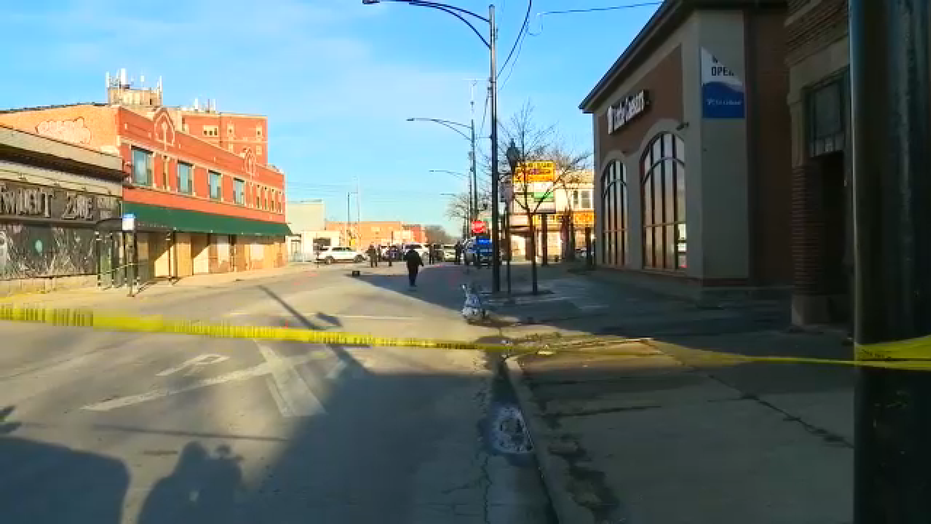 At least seven people were seriously injured Sunday following a shooting in South Chicago, according to authorities.

The shooting occurred around 3:40 p.m. when two cars drove by a group of people who were standing outside a Little Caesars pizzeria in the 7900 block of South Exchange Avenue, Chicago Police Supt. David Brown told reporters.

Brown said surveillance video showed a verbal exchange occurred between the group and someone inside one of the vehicles. After a short conversation, someone in the vehicle "almost immediately" opened fire, he said.

CHICAGO MOM FLIES TO HELP UKRAINIANS AT POLISH BORDER: I COULD NOT STAY AT HOME'

The shooting occurred outside a Little Caesars pizzeria in the 7900 block of South Exchange Avenue on Sunday, police said (WFLD)

At least two people were in critical condition and five others were in serious condition after the shooting, police said. All the victims were adults.

Brown said it wasn't yet clear if the shooting was targeted or if there was an altercation stemming from the conversation between the occupants in the car and the group.

"Whether it was a targeted shooting or an altercation, it's unacceptable," Brown said. "We're going to put all of our efforts forward to solve this shooting and bring those to justice that were involved."

There was no exchange of gunfire, though police said it was unclear if there were more than one shooter. It's also unknown at this time if the second car was involved, Brown added.

"[The victims] are all adults, and they were all together," said Brown. "We're not sure whether the other vehicle just fled because there was shooting or was involved."

Brown said anyone who knows more about what happened should contact the police. As of Sunday evening, no one was in custody.

Police said they will provide more information upon reviewing surveillance footage. The investigation is ongoing.