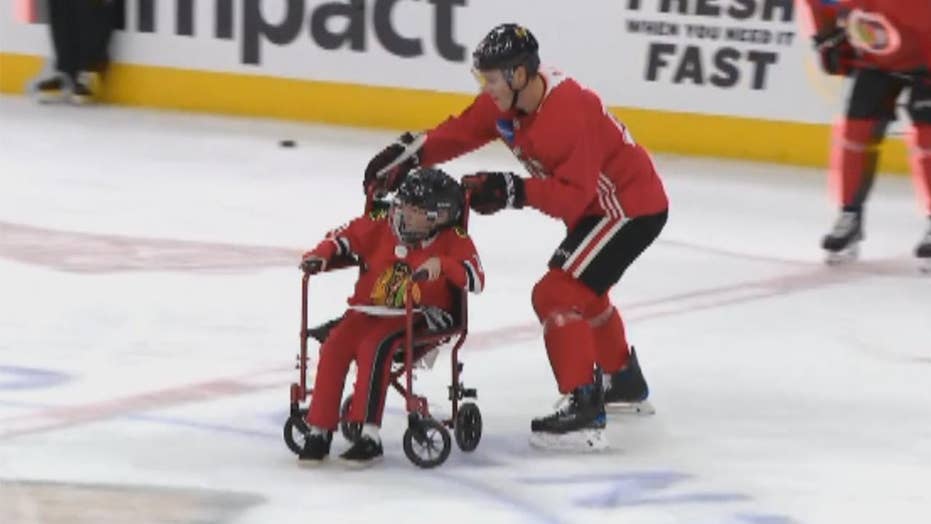 A 12-year-old Chicago Blackhawks fan who has muscular dystrophy was granted his wish on Tuesday to practice with his favorite ice hockey team.

Mason Berg, from Midlothian, Ill., was rolled onto the ice in a wheelchair on Tuesday to play some hockey with Blackhawks players, the Chicago Tribune reported. Berg was given the special day from the Make-A-Wish Foundation.

“This is just amazing,” Patty Berg, the child’s mother, told the Chicago Tribune. “He’s been wanting to do this. He just wants to be a Hawk so bad. And today was very special because he’s always, ‘Mom, can we go to the game? Mom, can we meet the guys?’ So today was just a wonderful day, and it’s something that he’ll never ever forget and neither will I.”

Berg was able to score a goal during a practice game and even played a prank on Blackhawks player Jonathan Toews.

“He was pulling tricks on me, handing me a water bottle with the screw off,” Toews told the Chicago Tribune. “Got a nice face wash. Apparently, that was his idea, too. It wasn't Seabs (Brent Seabrook) or any of the guys telling him to do that.”

Berg and his parents attended Tuesday night’s Blackhawks game to cap off the day.