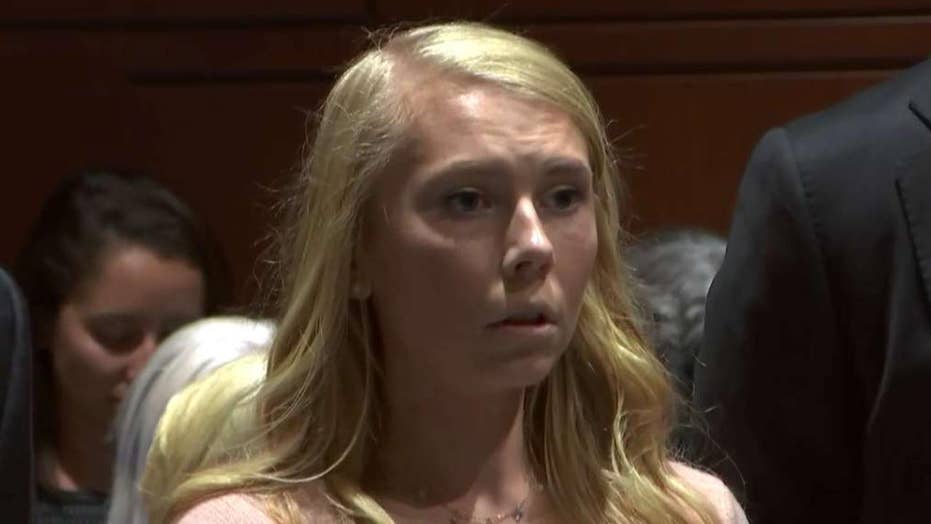 Jury finds former cheerleader not guilty of murder, guilty of abuse of corpse

An Ohio woman was acquitted Thursday of charges that she killed her unwanted newborn.

Richardson, a former high school cheerleader, was found guilty of abuse of a corpse and was scheduled to be sentenced Friday. That charge carries up to one year in prison, but she could get probation as a first-time offender.

Richardson faced life in prison if she had been convicted on all charges.

Prosecutors contended that Richardson, then a high school senior, wanted to keep her “perfect life" and attempted to do so by hiding her unwanted pregnancy and then buried her baby in her family’s backyard in May 2017, within days of her senior prom. The remains were found that July in Carlisle, a village about 40 miles north of Cincinnati.

Richardson's defense team said the baby she named “Annabelle” was stillborn and that the teen was sad and scared.

Brooke "Skylar" Richardson walks into the courthouse before closing arguments in her trial at Warren County Common Pleas Court Thursday, Sept. 12, 2019 in Lebanon, Ohio. Richardson, accused of killing and burying her newborn daughter, has pleaded not guilty to aggravated murder and other charges. (Nick Graham/The Journal-News via AP)

Prosecutors said the circumstantial evidence pointed to murder, saying that Richardson had cleaned up a bloody mess and texted her mother that she was  “happy” about her belly shrinking after the baby was gone.

A forensic pathologist testified for the prosecution that she concluded the baby died from "homicidal violence." Prosecutors said Richardson had searched on the internet for "how to get rid of a baby." They played video for the jury of a police interview in which Richardson said the baby might have moved and made noises.

Cincinnati psychologist Stuart Bassman said "Skylar was being manipulated" into making false statements during interrogations. He described Richardson as a vulnerable, immature person whose dependent personality disorder makes her want to please authority figures, even to the point of making incriminating statements that were untrue.

Julie Kraft, an assistant prosecutor, suggested that besides wanting to please authorities, Richardson's desire to please her family and boyfriend and fear of them abandoning her could have motivated her to commit extreme acts.

The trial drew daily coverage from Court TV and at least two national TV network newsmagazines planned stories on it.

The case had divided people in her village of some 5,000 people, with Facebook pages devoted to it and some critics trying to record the Richardson family's comings and goings to post on social media.