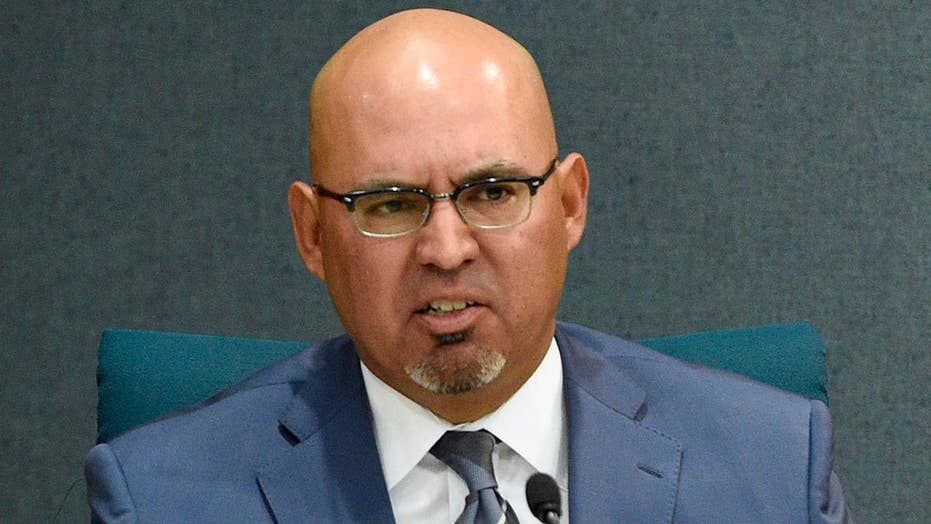 Teacher who called military 'lowest of our low' won't quit

California teacher and city councilman Gregory Salcido says he's sorry if he hurt anyone, but he's not taking back his comments and refuses to resign.

A Southern California city council member and teacher who called members of the military the "lowest of our low" was condemned Tuesday by his council colleagues -- some of whom demanded he resign.

Gregory Salcido, who was placed on leave from El Rancho High School in Pico Rivera, was heard on a video denigrating members of the military in a rant directed toward a 17-year-old student wearing a U.S. Marine Corps sweatshirt.

"They're not like high-level thinkers, they're not academic people, they're not intellectual people; they're the frickin' lowest of our low," he said. "I don't understand why we let the military guys come over here and recruit you at school. We don't let pimps come in the school."

The remarks prompted President Trump’s Chief of Staff, retired Gen. John Kelly, to say Salcido “ought to go to hell."

Pico Rivera Mayor Gustavo Camacho called Salcido’s remarks “bullying, arrogant and aggressive behavior.” The council cannot force Salcido to resign, but a motion was introduced to censure Salcido – which would bar him from city committees and appointments, and ask him to resign from the council.

Salcido, who made his first public appearance since Jan. 26, said he was sorry to anyone who was offended by his comments. Ultimately, he did not apologize for the remarks themselves.

Salcido said he was trying to get his students to not settle for the military.

“My goal, as it relates to my students, is to get them to do everything to get to college,” he said. "I wanted to challenge them to reach their academic potential.”

The student who was targeted by Salcido and the student's family chose not to attend the hearing, saying through an attorney they believed their presence would inflame the situation.

The teen told the Orange County Register in January he thought Salcido went too far with his comments.

“It was so disrespectful to my dad and my uncles and all veterans and those still in the military,” he said.

Salcido gave no indication he was going to step down from his post. He voted against the resolution.