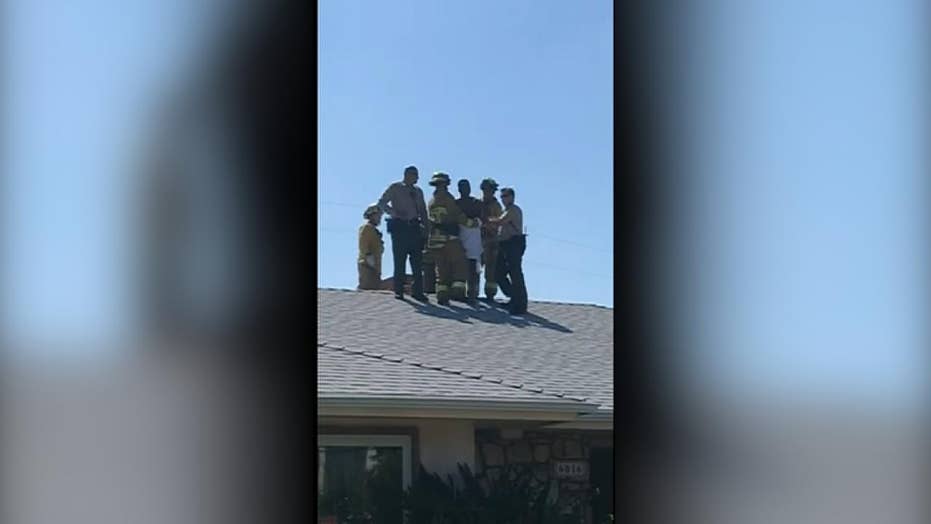 Raw video: The man was found stuck in the chimney after fleeing another California home that he reportedly attempted to burglarize.

A naked California man was pulled from a chimney over the weekend after he reportedly bolted from a suspected botched burglary attempt -- rambling that people were trying to kill him.

The unnamed man was captured on a witness’ video wrapped in a white towel as firefighters and police led him to a ladder. The man yelled from the rooftop that he’d “never run around here in front of everyone butt-naked.”

"I'm not crazy," he screamed at onlookers, claiming he'd been drugged. He also yelled that the police were trying to kill him.

The man earlier had tried to burglarize a home in Culver City without clothes on when the people living there confronted him, police told KTLA. An argument ensued and the man ran away.

Police searched for less than an hour when neighbors reported hearing a man’s voice from inside a chimney, KCBS-TV reported.

“I was just taking [my dog] for a walk, I was walking by the house and hear this “help me, they’re trying to kill me,” witness Alan Nelson told the station.

After he was pulled from the chimney and covered with a towel, police arrested the man on suspicion of burglary, KTLA reported.

But the man didn’t go quietly.

“The police service trying to kill me,” he yelled as officers escorted him away. “They got me running around here like a butt-naked criminal.”