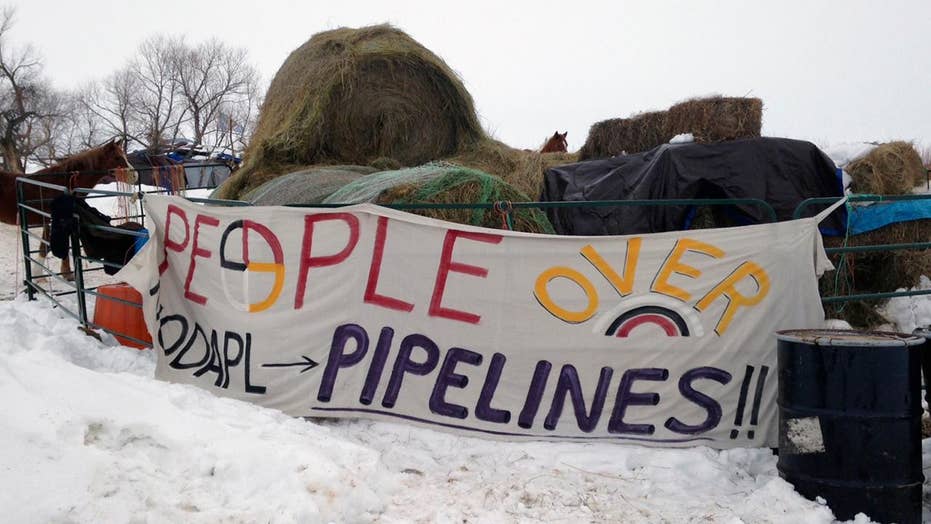 BIA’s announcement comes after the Army Corps of Engineers issued an order to a few hundred protesters at a camp in Cannon Ball, N.D., to get out by Feb. 22, the station reported.

BIA’s Acting Assistant Secretary for Indian Affairs Michael Black said on Friday that closing the camps is a matter of public health and safety.

PROPOSED FINE AGAINST DAKOTA ACCESS COMPANY TO GET HEARING

“North Dakota Gov. Burgum, the Standing Rock Sioux Tribe leadership, local law enforcement, and local landowners have all warned the public and those still camped of the dangerous spring flooding expected due to the heavy amount of snowfall the state received this winter,” Black said.

President Donald Trump last month called on the Army to reconsider its earlier decision to block the pipeline from being laid under Lake Oahe. It's the last big chunk of construction for the pipeline, and work has stalled while ETP battles the Army Corps of Engineers in court for permission to proceed.

Acting Army Secretary Robert Speer on Tuesday ordered a review of the Army's earlier decision not to grant permission until more study was done. It's unclear how long the review will take, but U.S. Sen. John Hoeven told the AP that after a conversation with Speer, he's certain permission will be granted soon.

"The fight is no longer here, but in the halls and courts of the federal government," Standing Rock Sioux tribal Chairman Dave Archambault said.

The Dakota Access pipeline would carry oil from North Dakota to Illinois. Opponents fear it could harm the environment and American Indian artifacts. The pipeline developer disputes that.