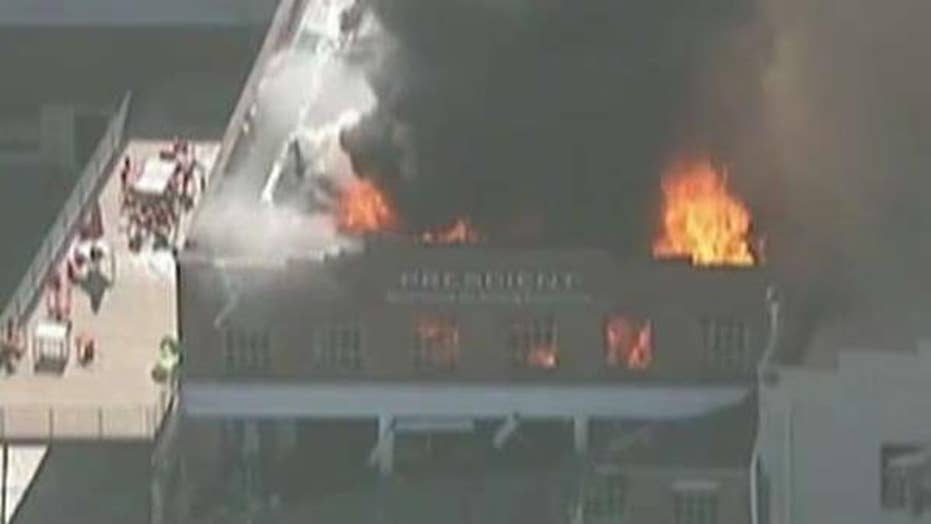 One person has been killed and at least 17 are injured after an explosion and massive fire at a building in downtown Durham, North Carolina on Wednesday.

Plumes of smoke can be seen for miles and debris covers the busy street as firefighters work to secure the area where the blast took place after a construction worker drilled into the sidewalk and struck a two-inch gas line, police told ABC News. A total of 17 people have reportedly been hospitalized, with six in critical condition and one sent to a burn center.

Among those injured is a firefighter who was hospitalized in serious condition, police say, and a Dominion Energy worker.

Durham Fire Chief Robert Zoldos, who was a first responder during the September 11 terror attacks, said that the building "looks like the front of the Pentagon on 9/11 -- but on a very, very small scale."

One person has been killed and at least 17 are injured after an explosion and massive fire at a building in downtown Durham, North Carolina on Wednesday<br data-cke-eol="1"> (Julie Wall/The News & Observer via AP)

The explosion, which took place near the Durham School of the Arts, was so severe that it blew out the windows of surrounding buildings, causing injuries such as deep cuts and head wounds to those inside, 58-year-old Jim Rogalski said.

"It was terrifying," he said. "The whole building shook. Things started falling — ceiling tiles, and structure and glass and debris. Lots and lots of dust. It was tough to see beyond 20 feet or so."

The explosion reportedly took place just 15 minutes after his human resource's manager emailed the company alerting employees that the fire department was investigating the smell of gas. People were in the process of being evacuated from the building when the explosion took place.

The site of the explosion is the historic Studebaker Building, which was built in 1920 as a car dealership and auto parts store. It has since been leased out as an office space to the Prescient Company, an industrial construction firm.