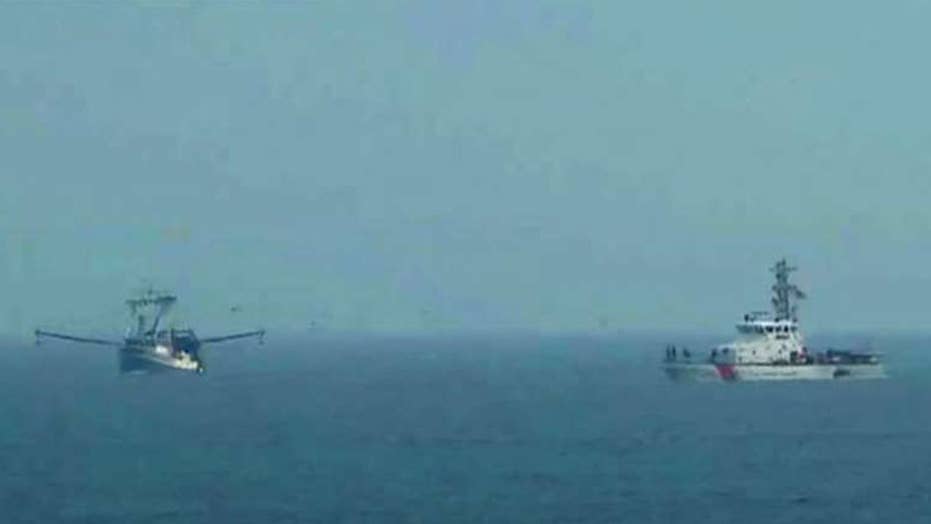 The plane went down during a thunderstorm off the coast of New York.

Four people, including a prominent New York builder who constructed homes for stars such as Martha Stewart and Billy Joel, were killed Sunday after their plane crashed off the coast of Long Island, police said.

"We are stricken by this loss," said Capt. Kevin B. Reed of the Coast Guard. "Our deepest sympathies go out to the families and loved ones of the two recovered individuals."

The four were on the Piper PA-31 Navajo plane heading to East Hampton Airport when it crashed into the Atlantic Ocean off Amagansett, Long Island, police said. Two bodies were recovered after the crash.

The Federal Aviation Administration was investigating the cause of the crash. Extreme weather was reported in the area when the plane went down.

Members of the New York State park police look near the scene of a plane crash in the ocean off Indian Wells Beach in Amagansett, N.Y. (AP)

“There was a very nasty thunderstorm going on. It was unexpected. There were very strong downdrafts,” Bill Gardiner, a local pilot, told the New York Post.

Gardiner added Ben and Bonnie Krupinski had owned the private plane since the 1980s.

The beloved couple known as “Bennie and Bonnie” by local residents had a real-estate empire worth a reported $150 million, according to the New York Post. On his business’ website, Ben Krupinski was described as a man who “earned a reputation for delivering outstanding results” and a member of the greater Hamptons business community for the last 40 years.

In a 1992 New York Times article, Krupinski was called an “ace East Hampton pilot and Contractor to the Stars.”

“They were generous beyond belief,” Citta Nuova employee Jeanne Nielsen told the New York Post. “They were very philanthropic…their grandson Will had worked here for the summer in the past. He was a student at Georgetown.”

Nielson said the family “flew all the time” and were expected to have dinner at Citta Nuova before heading to the movies.

The Krupinskis were also involved in politics and threw fundraisers for Republican politicians, Newsday reported. They also made campaign contributions to Lee Zeldin, Mitt Romney and Jeb Bush in the past.