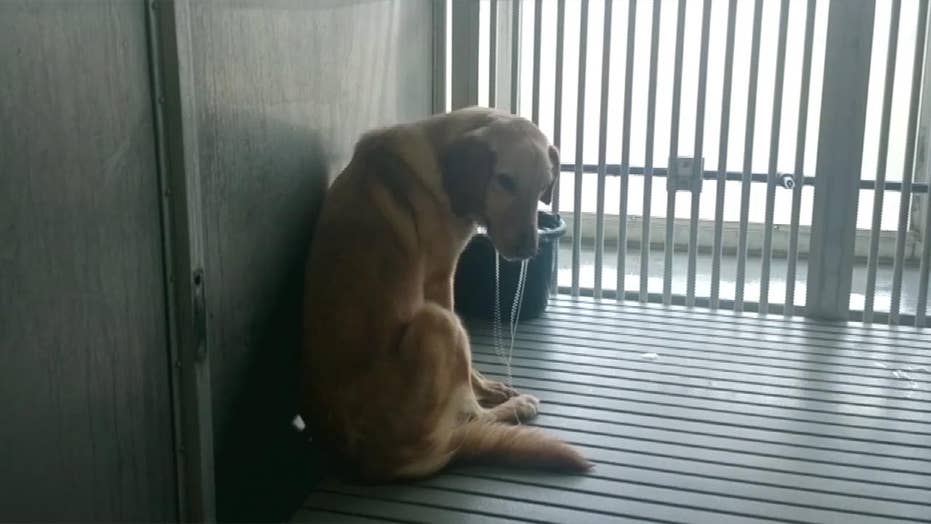 Raw video: Texas A&M is under fire over its research on dogs with muscular dystrophy. This video was sent to PETA by an anonymous worker at the university lab.

An online petition signed by more than 200,000 people is demanding a halt to a taxpayer-funded research project at Texas A&M University that studies muscular dystrophy’s debilitating effects in golden retrievers, arguing that it is cruel and scientifically useless.

Two Texas A&M students are behind the Change.org petition, which seeks an end to the experimentation led by Dr. Joseph Kornegay, in which the dogs are bred to develop different types of muscular dystrophy, including Duchenne muscular dystrophy -- a particularly severe form of the disease that causes progressive muscle wasting and weakness.

"Studies with these dogs haven't led to a cure or even a treatment to reverse disease symptoms, even after experimenting for 30 years," states the petition, which as of Tuesday morning had 217,645 signatures.

The petition follows a year-long protest by animal rights activists that began after an anonymous worker at the Texas A&M laboratory sent photos and videos of disabled dogs to People for the Ethical Treatment of Animals (PETA).

The images, obtained by PETA in 2013, showed golden retrievers struggling to walk and eat. Drool dripped from the mouths of dogs whose jaw muscles had weakened as a result of disease. PETA promptly filed an open records request for information about the research, which the group contends Kornegay has been conducting for more than 30 years at various institutions.

By late last year, PETA compiled corroborating evidence from the university on the research as well as testimony from scientists who claim the experiments are of no value to human patients.

"We had no idea that these sorts of experiments were going on," Dr. Alka Chandna, PETA's senior laboratory oversight specialist, told Fox News.

"It’s sad that in nature we see disease and disability but to deliberately breed animals to have muscular dystrophy is criminal," Chandna said. "They are using public money to conduct research that is painful and involves a lot of suffering."

"At the end of the day, dogs and humans are not being helped," she said.

In its effort to end the program, PETA cites Kornegay's own writings detailing how researchers stretch muscles of the dogs with levers to induce mechanical damage and how some dogs experience a shift in their hind limbs and an inability to open their mouths.

But the university stands firm in its belief that the research is valuable in developing new treatments for the disease in humans -- in particular, Duchenne muscular dystrophy. DMD is a genetic disease that affects boys, all of whom die early in life.

"While DMD occurs in nature in both children and dogs, the disease is not as severe in dogs, which means dogs offer a unique opportunity to learn as much as possible, thereby helping all affected by DMD," university spokeswoman Amy Smith said, speaking on behalf of Kornegay and the research project.

"After years of study, we are close to a promising novel treatment involving gene therapy," she said.

Smith also noted that the Federal Drug Administration requires medications to be studied in at least two animal species before being tried with people.

"Without animal studies, there will be no new medications for people," she said.

Texas A&M also defends its handling of the dogs, saying they are treated with "great care and tenderness for the heroes that they are."

Similar studies on dogs with muscular dystrophy are being conducted in one other U.S. university and possibly a third.

Kornegay, who works at Texas A&M's Department of Veterinary Integrative Biosciences, has written for more than 30 publications about his research on muscular dystrophy in dogs, including a 2013 article titled "Comparative Genomics of X-linked Muscular Dystrophies: The Golden Retriever Model."

"There’s not another way," Kornegay told Fox News in a December 2016 interview.

"I’m a dog lover. I’m a veterinarian. I’ve had dogs all my life," he said. "So every time we have a research project we want to be as sure as we can that the research will be valuable because the dogs are valuable. Not financially valuable, but valuable as individuals."

Animals rights groups, however, say the photos and video "say it all" about the treatment of the dogs at Texas A&M.

"I think it's clear there's no love there. There's no care there. This is not what anybody would consider humane," said Chandna.

"The university's claims ring hallow," she said. "Decades of tormenting and killing dogs have yielded nothing."