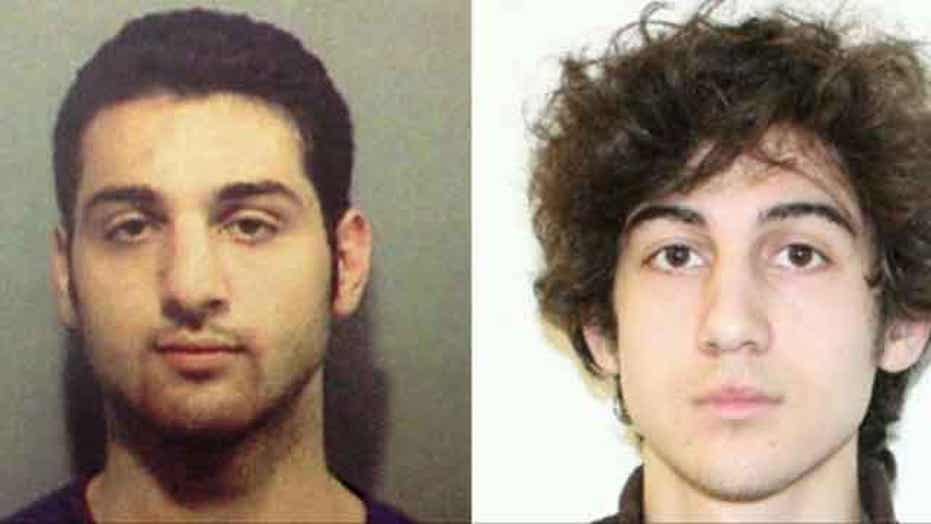 Source: Bombs completed at Tamerlan Tsarnaev's home ahead of schedule

The suspects in the Boston Marathon bombing originally planned to target a Fourth of July celebration, but chose the prestigious race as a "target of opportunity" after the bombs came together more quickly than expected, according to The Associated Press.

Tamerlan Tsarnaev, 26, and 19-year-old Dzhokhar Tsarnaev allegedly assembled at least four types of improvised explosive devices in the home Tamerlan shared with wife Katherine Russell, sources tell Fox News. Typically, in cases of homegrown terror, only one type of explosive is constructed. Additionally, Dzhokhar Tsarnaev told investigators the building of the bombs happened more quickly than expected, according to sources. The brothers reportedly had planned to set off the explosives on July 4, but changed their plans when the bombs were finished early.

The Washington Post reported that their original target was a celebration along Boston's Charles River.

After the Boston bombings, the brothers still had a pressure-cooker explosive and four pipe bombs and were bound for New York City before they were stopped by authorities, New York officials say. Tamerlan Tsarnaev was killed after a shootout with police days after the Boston attack. Dzhokhar was captured alive but wounded and now is in federal custody facing a charge of use of a weapon of mass destruction that could get him the death penalty..

Sources say the planning for the April 15 attack showed "clear premeditation," including the decision to target the finish line of the Boston Marathon. Three people died in the attack, and more than 200 people were wounded.

Some speculated that the attack was specifically timed for Patriot's Day, a key holiday in the city of Boston, but sources suggest to Fox News that the race was targeted because of its timing shortly after the bombers' felt prepared to carry out their plan.

Two sources familiar with the investigation told Fox News that Russell communicated with her husband after the bombing.  One source said the communication included at least one phone call, and the second source described an email possibly containing an attachment which included a surveillance photo released by the FBI.

An investigative source also told Fox News that the Al Qaeda web magazine "Inspire" was found on the computers examined by the FBI.  The source did not indicate whether it was found on Russell's electronics or on those of her husband or brother-in-law.

Three of Dzhokhar's friends were charged Wednesday with hindering the investigation, including dumping a laptop and a backpack filled with hollowed-out fireworks that were found in his college dorm room.

Documents based on interviews with the three fellow students reveal Dzhokhar Tsarnaev allegedly dropped sinister hints before the attack, telling his friends a month before that he had learned how to make a bomb. However, it wasn’t until the FBI released a surveillance photo of the suspects that the friends realized Tsarnaev may have been involved.

The FBI claims this prompted Dias Kadyrbayev and Azamat Tazhayakova, both 19-year-old natives of Kazakhstan and friends of Tsarnaev at UMass-Dartmouth, to go to Tsarnaev's dorm and take the laptop, backpack and some Vaseline that may have been used in making the deadly pressure cooker bombs. Police believe the bombs were packed with shrapnel and gunpowder removed from fireworks.

Sen. Chuck Grassley, R-Iowa, in a three-page letter sent to Department of Homeland Security Secretary Janet Napolitano Thursday, asked for additional details about the student visa applications for  Tazhayakov and Kadyrbayev, and how Tazhayakov was allowed to re-enter the United States in January.

The lawyers for the Kazakh students said their clients had nothing to do with the bombing and were just as shocked by it as everyone else. Phillipos' attorney said the only allegation against him is "he made a misrepresentation."

A representative of the Dyer-Lake Funeral Home in North Attleboro, Mass., confirmed to The Sun Chronicle that Tsarnaev's body was brought to the funeral home from the Boston Medical Examiner's office by one of its hearses.

Local Boston station WFXT reported that a hearse carrying Tsarnaev's body was escorted away from the funeral home by police escort late Thursday.

Timothy Nay of the Dyer-Lake Funeral Home said he is no longer in possession of the body, The Sun Chronicle reported.

Nay said the body arrived at the facility based on a request from a lawyer representing the suspect’s family.

“What happened is we were contacted by the family’s legal representation and by authorities and asked to transfer the remains temporarily to our facility until another funeral home in the state could take them,” Nay said.

“It was never our intention to handle any of the arrangements,” he said.

Stefan said everybody deserves a dignified burial service no matter the circumstances of their death and he is prepared for protests. He added that arrangements have yet to be worked out.

A death certificate says Tsarnaev died from gunshot wounds and blunt trauma to his head and torso.