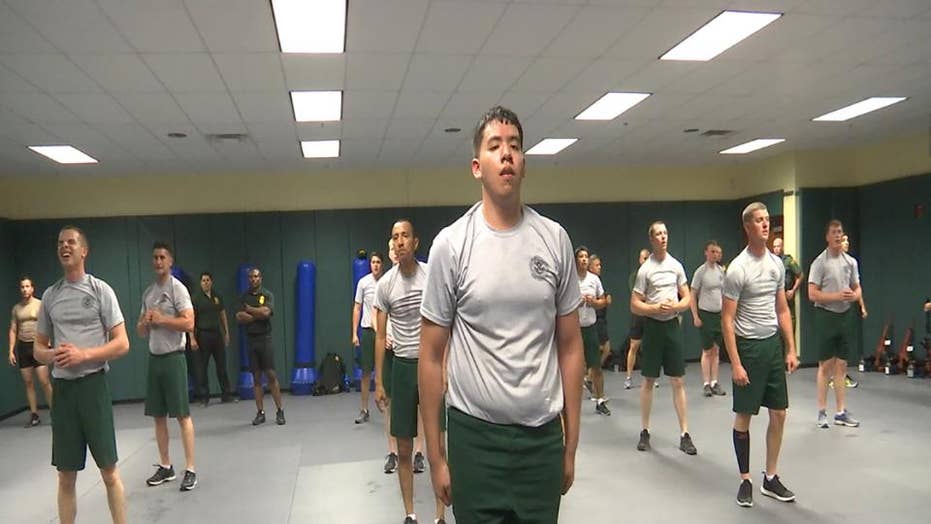 The Border Patrol Academy in Artesia, New Mexico has a new curriculum for recruits that emphasizes hands on training and learning the Spanish language

ARTESIA, N.M. – The Border Patrol Academy was a 100-day training program mostly in a classroom setting. But the agency has recently revamped its training program to make it more hands on and interactive.

The changes came after a 2013 review of the federal agency was critical of their handling of migrants and showed agents were assaulted by illegal immigrants at the border.

The goal is to train agents to think ahead and stay out of danger, rather than problem-solve as issues occur.

The Border Patrol Academy has the same bollard style fencing as agents will find in the field. Recruits are taught how to patrol safely around the fencing and never turn their back to it, just in case someone is hiding on the other side. (Fox News)

“We take real life events that have happened to Border Patrol agents in the field protecting America, and we train them in a safe training environment here in Artesia,” said Dan Harris, Chief Border Patrol Agent at the academy.

The first class to go through the new six month program graduated on March 28. The curriculum, which Harris describes as student centric rather than instructor centric, prioritizes practice over classroom lectures. As an example, to teach trainees the proper way to search a vehicle for drugs or other contraband, instructors do a two-hour lecture and a four-hour lab.

The program is basically broken down into four steps: teach, show, practice, and evaluate. It’s proven to be quite a challenge for the recruits who have to learn everything from hand-to-hand combat and defense to immigration law.

“It was difficult and late night studies and a lot of note cards and flash cards, but you do it because you have to,” said Julia Cassano, a recruit at the academy.

Cassano is almost finished with the program and said he has learned a lot in the last five months. The former special education major-turned-Border Patrol recruit has been trained to drive over hills and rocky terrain, conduct searches, and make an arrest while battling through the pain of being pepper sprayed.

“In a way it was, ‘Holy cow, what am I getting myself into?’ But I was mentally and physically prepared for it,’’ said Julia Cassano, a recruit.

Despite being pepper sprayed and even zapped with a Taser, new recruits told Fox News the hardest part of the academy is learning to speak Spanish.

“When you can do it in English it’s significantly easier. But then you throw a whole different language into it and the problem becomes 10 times tougher,” said Benjamin Swatek, an academy recruit and former Marine.

Swatek has nearly completed his six months at the academy. He’s spent his nights and extra time trying to complete his Spanish lessons over and over again.

“I’ve had zero background in Spanish. And now I’m doing full scenarios where I’m speaking nothing but Spanish,” said Swatek.

Swatek and Cassano are set to graduate in the coming weeks, but their training will continue on the job. They’ll spend about 16 weeks with a field training officer and a full year taking Spanish classes.

Ray Bogan is a Fox News multimedia reporter based in El Paso, Texas. Follow him on twitter: @RayBogan
ADVERTISEMENT