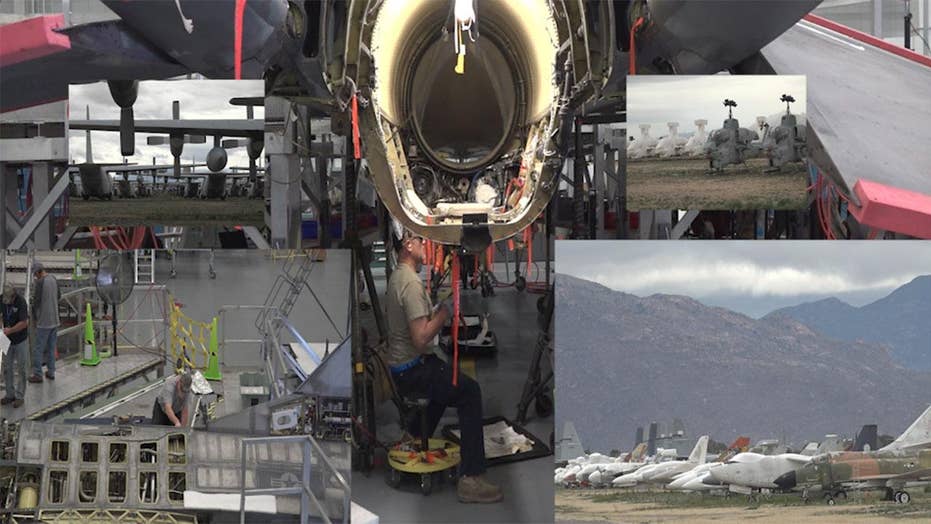 TUCSON, Ariz. -- It's nicknamed the Boneyard. It sits on 2,600 acres of desert land, with more than 3,000 military aircraft on the Air Force’s Davis-Monthan Base. It's more than a retirement home for planes from all five branches of the military, NASA, and the U.S. Forest Service. It's a sort of memorial with multiple uses. Many of the planes are scrapped for parts and some completely refurbished.

The 309th Aerospace Maintenance and Regeneration Group (AMARG) is the only place in the country authorized to store military-grade planes.

Planes from all five branches of the military, NASA, and the US Forest Service are stored at AMARG. (Fox News)

“We’re looked at as a national air power reservoir…How do you make sure that what you’re keeping there is what’s of value to the service,” said Col. Jennifer Barnard, commander of the 309th AMARG. “So, there’s a really rigorous process by which it’s determined the assets should be stored here and what needs to come out of here, as well.”

"Boneyard wranglers" are tasked with demilitarizing and recycling, along with restoring the fighter jets, planes, and helicopters. (Fox News)

The staff at AMARG call themselves the “boneyard wranglers.” There’s just under 700 of them on base and Barnard is in charge of the whole operation, which includes demilitarizing and recycling, along with restoring the fighter jets, planes, and helicopters.

“There’s so much great use that happens,” Barnard said. “Because we’re behind a fence and we’re an active military installation...people perceive there to be a great amount of mystery about what happens here. Getting to be the commander of this place, I see there’s a lot of amazing things that happen here. We’re able to reutilize as many assets as possible out of here and nothing goes to waste.”

Some of the aircraft are reclaimed and refurbished as part of projects for the U.S. military or are sent abroad — then are sent back ready to fly again.

“The ability to do that is (it) allows us to be able to make good resources out of things that would not be able to be used otherwise,” Barnard said.

One of the current reclamation projects the Boneyard wranglers are working on is restoring fighter jets. When ready, they will send them to Boeing for autonomous flying testing. Barnard said they will then go back to an Air Force unit that will use them for weapons testing—to essentially shoot them back down.

“Our folks are making these aircraft flyable again,” Barnard said. "So, they're regenerating the aircraft.”

A "boneyard wrangler" working on a fighter jet to refurbish. (Fox News)

Another current project is refurbishing C-130 planes to eventually place them on combat aircraft.

The Pima Air and Space Museum partners with the Air Force base, giving tours to the public. But tickets are required to be booked well in advance with a background check in order to be able to enter the base.

“The wide misperception is that it's a boneyard like it's a big aircraft junkyard, it's really nothing like that…they are still in the process of making history, supporting the warfighters, supporting the ambitions of the United States and its leadership in aerospace still,” said Scott Marchand, Pima Air & Space Museum executive director.

Olivier Battisti and Emmanueo Benet were visiting the museum from Paris. They were unable to visit the Boneyard but still enjoyed the museum.

“It’s my first time in this museum, it’s wonderful to see so many different types of planes from all the countries,” he said. “U.S. planes, French planes, German, Russian planes. They all are part of history."

Dean Lindeman and his wife, Stephanie, are from Minnesota and visited the museum for the first time in February. Both said they don’t know much about aviation but were fascinated by learning about the more than 350 aircraft housed at the museum.

“Who would’ve ever known that there were this many types of aircraft…very impressive that somebody’s taken the time, effort, and expense to preserve this…it’s a great way to learn about the history of our country,” Lindeman said.

Steve Klafter was a general aviation pilot for 48 years and now volunteers his time at the museum to educate visitors.

“I'm 79 years old so I figured it was about time that I hang up my silk scarf and goggles…we just have this passion for airplanes and love to talk about them,” Klafter said.

In total, with the planes housed at both the Boneyard and the museum, it equates to the largest amount of military planes housed in one location in the world.

“You can see probably 4,500 aircraft in the same zip code…we’re unique in the world—this is the only place you can come see 350 aircraft here and over 4,000 aircraft stored in the desert…(the United States) brought powered flight to the world and we continue to innovate and reach for the stars with our aerospace industry,” Marchand said.