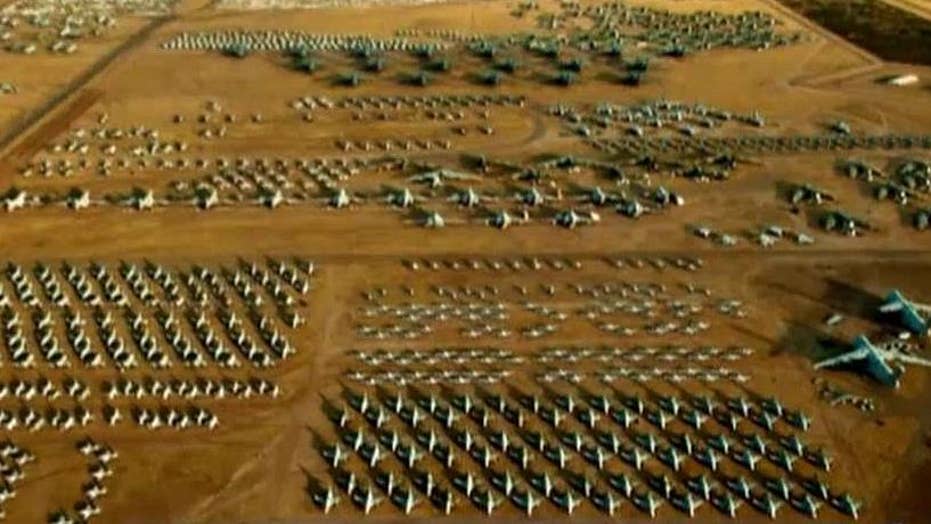 Not fit to fly: Marines forced to refurbish old warplanes

The Marines are looking for a few good planes, and their search has taken them to an Arizona boneyard where the Corps’ old F/A Hornets have been gathering dust for years.

The jets are being reclaimed and refurbished by Boeing after the service branch was caught short on planes because of long delays in the rollout of the much-awaited F-35.

"We are very focused on our current readiness, and at the moment, we don't have enough Hornets for combat, flight instruction and day-to-day training," Marine Corps spokeswoman Capt. Sarah Burns told FoxNews.com in an email.

The Marines could have done as the Navy did and adopted second generation F/A- 18E/F Super Hornets until the new planes were ready, but opted not to. Burns said it was the plan all along to keep the Hornets where they could be recalled, but critics questioned the original move.

A total of 30 F/A-18C Hornets recovered from the “boneyard” will be modified to a current “C+” standard under a contract with Boeing and the USMC signed in 2014. (USMC.mil)

“In hindsight, it was a misstep for the USMC to not have purchased the F/A-18E/F Super Hornet, but only because the F-35 has seen such extensive delays and complications in production,” Omar Lamrani, senior military analyst for global intelligence firm Stratfor told FoxNews.com. “If the F-35 had entered production as originally scheduled and at the expected price, then the USMC would have been able to successfully transition straight from the F/A-18 Hornets to the F-35.”

Boeing has refurbished two of a planned 23 F/A Hornets stored at the Davis-Monthan Air Force Base near Tucson – known as “the boneyard” – and will soon finish more, according to WarIsBoring.com. The planes will be modified to a current “C+” standard under a contract with Boeing and the USMC signed in 2014.

It’s not the first time the military has brought back decommissioned planes from the graveyard. The Marines pulled and restored several retired heavy-lift helicopters during the height of the Iraq War to help with a shortfall in the fleet as a result of heavy usage and crashes.

The F-35 was supposed to be ready for front-line service in 2006. The Marine Corps reasoned that the Super Hornets were too pricey to serve as a bridge to the new planes, and chose to continue to operate their current fleets.

As the F/A Hornets dwindled through attrition, and quality-control issues delayed the F-35 from coming off the assembly, the Corps was caught short.

Lt. Gen. Jon Davis, the USMC deputy commandant for aviation, told Senate lawmakers that just 32 percent of the Corps’ Hornet fighters were operational. The branch needs at least 58 percent of the F/A-18s to be flight ready so that there are enough planes for combat, flight instruction and day-to-day training.

Officials for the USMC did not immediately return requests for comment but in their most recent annual report on aviation capabilities, Davis said, “I am concerned with our current readiness rates, both in equipment and personnel.”

Some experts say bringing back the F/A-18 jets may not be much of an issue.

“I consider it a pretty smart move on the U.S. Marine Corps side,” David Cenciotti, of the influential blog The Aviationist, told FoxNews.com. “The F/A-18C and D are very reliable airframes that are quite easy to maintain and operate. Once upgraded to the C+ standard, these ‘gap fillers’ are more than enough to conduct combat operations in low-lethality scenarios like those that see the USMC at work these days.”

Once the upgraded ‘legacy’ Hornets are delivered, Cenciotti added, older planes can rotate to daily training activities required by the Marine Corps pilots to maintain preparedness.

Lamrani says the only real danger is if maintenance is not kept up on the refurbished planes, but that their usage leads to other issues.

“Refurbishing mothballed aircraft is not inexpensive, and hardly cost effective,” he told FoxNews.com. “All this is again linked to the F-35 failing to arrive on time.”