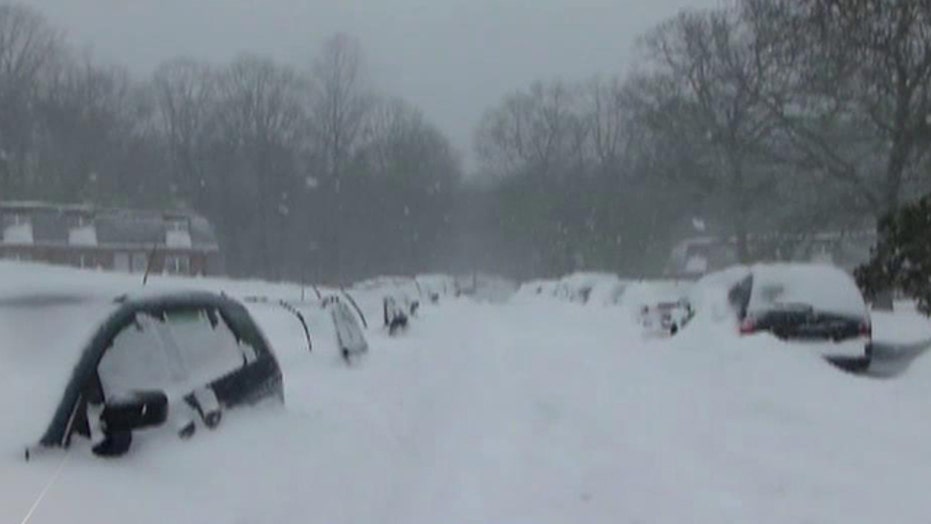 The New England area is bracing for a double threat of bone-chilling gusts of wind and tons of more snow as the area cannot seem to catch a break this winter.

Another round of blizzard-like conditions is expected to top off some parts of the region with another foot of snow starting Saturday night into Sunday with wind gusts topping off at 75 mph, forecasters told The Boston Globe.

The snowstorm targeting New England is expected to intensify Saturday evening and will stretch into the day on Sunday, National Weather Service meteorologist Patrick Burke told FoxNews.com Friday. Areas around Boston could see more than 10 inches of snow, while parts of Maine could yield up to 18 inches.

"On Sunday, the best thing people can do is stay home, stay indoors," he said.

Gov. Charlie Baker urged motorists to stay off roads during the storm, but he stopped short of an outright travel ban. He said Saturday people probably had until midnight for storm preparations or Valentine's Day celebrations.

"It's a Cinderella evening to enjoy your loved ones," he said.

Boston Mayor Martin J. Walsh announced a snow emergency and a parking ban that will go into effect at 10 p.m. Saturday. The city also ordered the reconfiguration of several streets to improve public safety.

“The projected heavy snow and high winds will significantly inhibit the MBTA's ability to deliver safe and reliable service. Trees and power lines could come down, and visibility will be hampered," the MBTA said in a press release said.

"Additionally, the MBTA is concerned that a train could break down between stations, resulting in a track right-of-way evacuation that would put customers, employees and emergency responders at risk."

Massachusetts scrambled to clear roads Friday. The state’s National Guard reportedly sent 16 soldiers and 12 vehicles to help the coastal city of Gloucester with snow removal. The city has received more than 80 inches of snow over snowstorms that have hampered the area this year.

The National Grid already has 80 crews in place to deal with downed trees and branches, with another 250 linemen prepared for the challenges the storm will bring.

The Boston Herald, citing National Weather Service data, reported that Boston has received 61.6 inches in less than a month, breaking the record of 58.8 inches in one 30-day period ending in February 1978, the month of the infamous blizzard of ’78. Burke told FoxNews.com that the region has already set records for snow received in a seven-day period, and the 37 inches reported at Boston’s Logan Airport a few days ago set another record.

The area might not even be out of the woods after the weekend’s storm. Forecasters are already calling for more snow Wednesday.