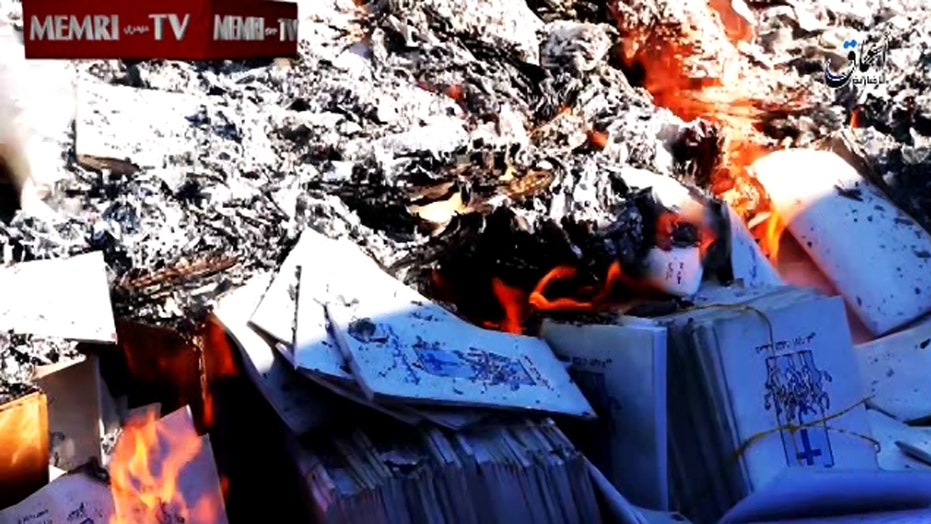 Having driven the last Christian out of Mosul, ISIS has now released a chilling video showing a bonfire consuming a huge pile of Bibles and other Christian literature.

The video, entitled “Diwan of education destroys Christian instruction books in Mosul,” was made by ISIS’ “morality police,” the infamous Diwan Al-Hisbah, according to Christian Today. It comes as the U.S. is deliberating over whether to label the terrorist group’s actions in Iraq as genocide, a term that has important ramifications under international law.

“It’s another example that ISIS means what they say,” David Curry, CEO of Open Doors USA, told FoxNews.com. “That’s what makes the debate so powerful. They want elimination and they are very serious.”

While ISIS has killed, enslaved and displaced hundreds of thousands of Iraqi Christians, the destruction of religious materials could also be part of a genocide determination.

The House voted unanimously Monday to approve a resolution branding ISIS’ actions as genocide, which the UN Convention on the Prevention and Punishment of Genocide defines in part as “acts committed with intent to destroy, in whole or in part, a national, ethnical, racial or religious group.”

‘This has always been genocide.The west has realized that they cannot deny it any longer.”

The State Department is under pressure to reach the same conclusion, which could obligate the U.S. to take action.

The video first surfaced last week and shows ISIS militants piling hundreds of books with crosses printed on the cover into a large fire at an unknown location in the northern Iraqi city.

“This video is the first specifically showing the burning of Christian books,” officials for the Jihad and Terrorism Threat Monitor team for the Middle East Media Research Institute said in a statement to FoxNews.com.

Although Mosul was once considered a center of Christianity in northern Iraq. All Christians-- whether they were killed or fled persecution-- are believed to be gone from the city when it was occupied by ISIS in 2014. (The Associated Press)

Mosul, long considered a haven for Iraq’s Christian population, was overrun by militants in 2014. After the takeover, ISIS demanded that Christians convert to Islam, pay a tax known as a jizya, or flee the city. Although Mosul was once considered a center of Christianity in the region, all Christians are believed to be gone from the city.

The Christian population of Iraq has dropped from 1.5 million to 275,000 since ISIS established its caliphate.

“The stated purpose [of ISIS] to eliminate and force the Christians and Yazidi people out of the region,” Curry said. “They are succeeding. The Christian population in the region has greatly diminished.”

If U.S. Secretary of State John Kerry determines their actions amount to genocide, the UN could be forced to address the issue.

"This has always been genocide,” Curry told FoxNews.com. “The West has realized that they cannot deny it any longer.”