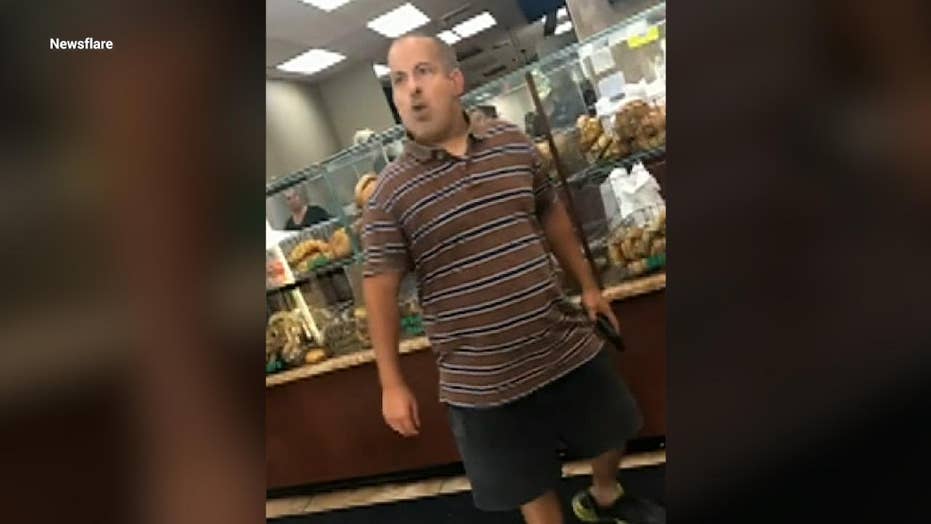 Chris Morgan ranted to employees and patrons at a bagel shop, claiming women won’t date him because he’s too short.

Another day, another “Bagel Boss” beef.

Long Island resident Chris Morgan aka the “Bagel Boss” guy was caught on camera going berserk on some people at the Bay Shore Marina on Sunday, prompting cops to step in and put the pint-sized terror in handcuffs — and then the hospital — for a psych evaluation.

“We’re sick of your nonsense,” a person can be heard telling Morgan as Suffolk County officers take him into custody.

The 5-foot-tall bagel store brawler was allegedly attacking people and “causing a disturbance” at the Bay Shore Marina — swinging a small bat and shouting, cops said.

Officers on patrol spotted him around 5:45 p.m. and quickly took him down.

“Get on the ground!” a cop can be heard telling Morgan on cellphone video, which was posted on Facebook by a local resident who witnessed the mayhem.

Additional footage shows Morgan — who went viral last month following a  meltdown at a Long Island Bagel Boss — screaming at someone about being sprayed in the eyes with something.

Later, while being handcuffed by cops, he tells them: “He sprayed my eyes!”

Morgan is preparing to go toe-to-toe with Mets legend Lenny Dykstra next month in a Celebrity Boxing match in Atlantic City. The two of them faced off for the first time at a press conference promoting the event last week.

Morgan’s episode at the Bay Shore Marina landed him in a local hospital for evaluation, according to police. It’s unclear if he was being held overnight. Attempts to reach him and his management team were not immediately successful.