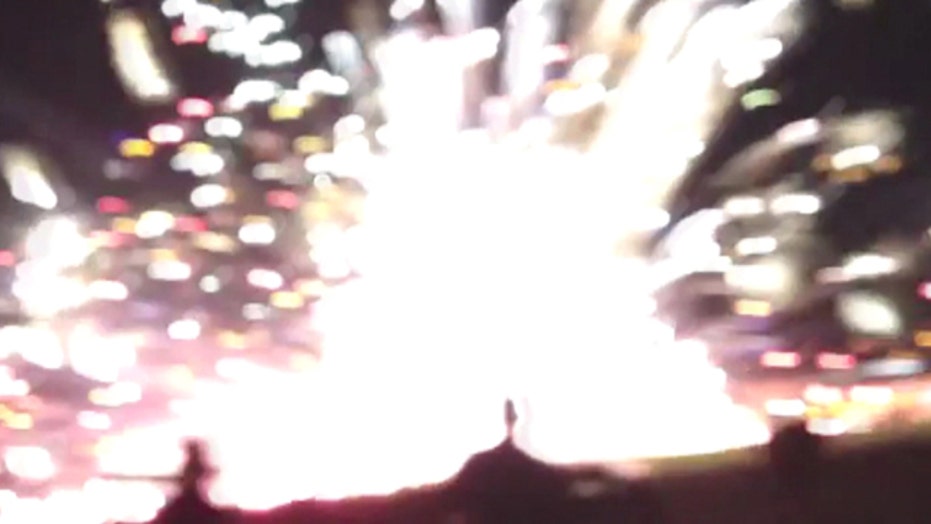 SIMI VALLEY, Calif. – More than two dozen people were injured when a wood platform holding live fireworks tipped over, sending the pyrotechnics into a crowd at a Fourth of July show northwest of Los Angeles, authorities said Friday.

Between 8,000 and 10,000 revelers were settling into their seats for the fireworks extravaganza at a Simi Valley park Thursday night when the spectacle of lights that were supposed to be launched in the sky never took off. Instead, a bright plume of red and white bursts spread across the ground, injuring 28 people and sending others fleeing for safety.

Police were still investigating what led to the explosion, but they said early indications show a platform designed and built to hold the fireworks gave way.

"For some unknown reasons the structure that holds these ordinances collapsed and caused them to be firing into the crowd," Simi Valley police Cmdr. Stephanie Shannon.

Four people were listed in serious condition, but their injuries were not considered life-threatening. Sixteen more were taken to hospitals with minor to moderate injuries. The remainder were treated at the park where emergency crews, already on hand as a safety precaution, set up a triage area.

Meanwhile, a worker at a fireworks show in North Myrtle Beach, S.C., was injured Thursday evening when a shell exploded prematurely. The explosion at the Cherry Grove Pier caused the show to end early, after just six minutes, and left a hole in the pier.

In California, a video clip aired on KCAL-TV shows a pair of firework blasts at or near the ground. Another clip, posted on YouTube and shot from a distance, shows three ground-level bursts. The fireworks continue for almost another minute before stopping.

"There was a big boom, everybody started running down the street, people were screaming," Justice Allen, 17, of Simi Valley told the Los Angeles Times. "Everybody was just terrified. People hid in bushes."

Authorities estimate people were 900 feet away from where the fireworks were being launched. One police officer who ran into the crowd when the blasts occurred had shrapnel tear through his leather belt and his clothing, Shannon said. He had minor injuries to his back.

Shannon said most people responded admirably and left in an orderly fashion. A bomb squad was at the park to deactivate the remainder of the fireworks.

Shannon said the fireworks primarily shot in one direction.

"They are going to travel the same distance across the park as they would in the air," she said. "The ones that had actually ignited that had to run their fuse were going directly into the crowd."

The annual July Fourth celebration has been sponsored by the city and the local Rotary Club for the past 43 years.  Shannon said she had no information about the company hired for the fireworks show.

Simi Valley, home to the Ronald Reagan Presidential Library, is about 40 miles northwest of Los Angeles.