Authorities in Southern California say they have arrested a 32-year-old man on arson charges in connection with five fires -- including one blaze that is threatening about 600 homes in the San Jacinto Mountains east of Los Angeles.

The largest of the five fires was the so-called Cranston Fire, which quickly turned into a wall of flame that torched timber and dry brush. In a matter of hours, the fire grew to 7.5 square miles.

Because of the blaze, about 3,000 residents were under evacuation orders Thursday in Idyllwild and several neighboring communities that total about 12,000 people.

William Blodgett of Idyllwild told FOX 11 in Los Angeles that he and other residents couldn't get to their homes because of the fire, so they waited at a local gas station -- until the flames headed toward them there.

"We were all peeling out of there as fast as we could," he told the station. "It was apocalyptic."

The blazes in Southern California were among a larger group of fires that have been burning throughout the state, as California also deals with high temperatures and dry summer conditions.

In Central California, the heart of Yosemite National Park remained empty a day after campers and hotel guests were evicted so firefighters could try to keep the Ferguson Fire, the state's largest, from entering the park nearly two weeks after it was sparked. 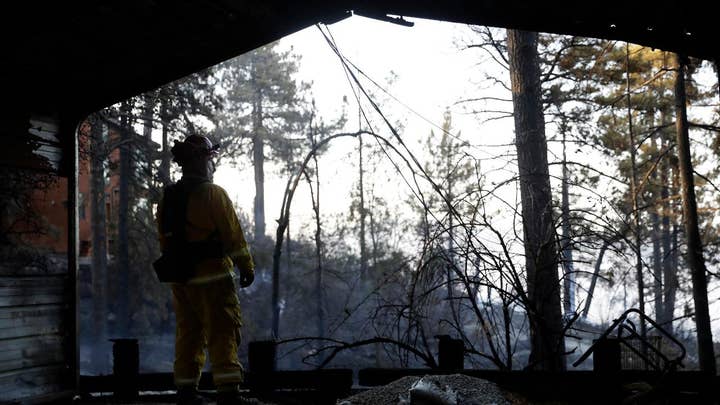 The closure was heartbreaking for travelers who mapped out trips months in advance to hike and climb amid the spectacular views of cascading waterfalls and sheer rock faces.

Daina Miller of Tucson, Ariz., had wanted to visit Yosemite for years, but instead her family spent a few hours breathing foul-smelling smoke Tuesday before retreating to their RV for the night. The next morning, they left for Los Angeles.

"You go there and expect the fresh air and it was the total opposite of that," she said Thursday. "It's kind of funny, we're going to LA to get some fresh air."

The closure through at least Sunday led to at least 1,000 campground and hotel bookings being canceled, park spokesman Scott Gediman said.

Officials emphasized Yosemite wasn't in imminent danger from the Ferguson Fire, which grew to more than 67 square miles in steep timber in the adjacent Sierra National Forest. The fire was just 25 percent contained.

One firefighter was killed July 14, and six others have been injured.

In Northern California, a fire burning west of Redding, about 100 miles south of the Oregon state line, tripled in size overnight and then grew another 50 percent through the day to 45 square miles.

Stiff winds drove walls of flames into the historic Gold Rush-era town of Shasta, where state parks employees had worked through the early morning to rescue historic artifacts from a museum as the blaze advanced.

The so-called Carr Fire was just one of several wildfires that have dispatched firefighters to all corners of the state amid an oppressive heat wave.

New evacuations were expanded to about 2,200 people in the wilderness recreation region east of Redding that included Shasta and its historic former courthouse and ruins of brick buildings that make up Shasta State Historic Park.

Matt Teague, an acting district superintendent for state parks, drove about 90 minutes in the middle of the night to help employees of the park and volunteers rescue historic paintings, prints and other artifacts from the museum housed in the 1861 courthouse.

The fire's faint glow was visible when he arrived at 3 a.m. and it kept getting brighter, he said.

Just before dawn, the flames had gotten close enough that they were about to evacuate when the fire changed direction and began burning to the north, he said.

That bought them five more hours to collect the most precious items until late morning when it became too dangerous and they were told they had to leave.

"We were on our toes the whole time, to be honest with you," Teague said. "We didn't get everything. We didn't have time."

Teague spoke later in the day as ash rained down and flames burned on both sides of town as temperatures in the area topped 110 degrees Fahrenheit (43 Celsius). He said the downtown and centerpiece of the park still stood, but it was unsafe to go inside and collect more relics.

California Gov. Jerry Brown has declared states of emergency for the three largest fires, allowing the state to rally resources to local governments.