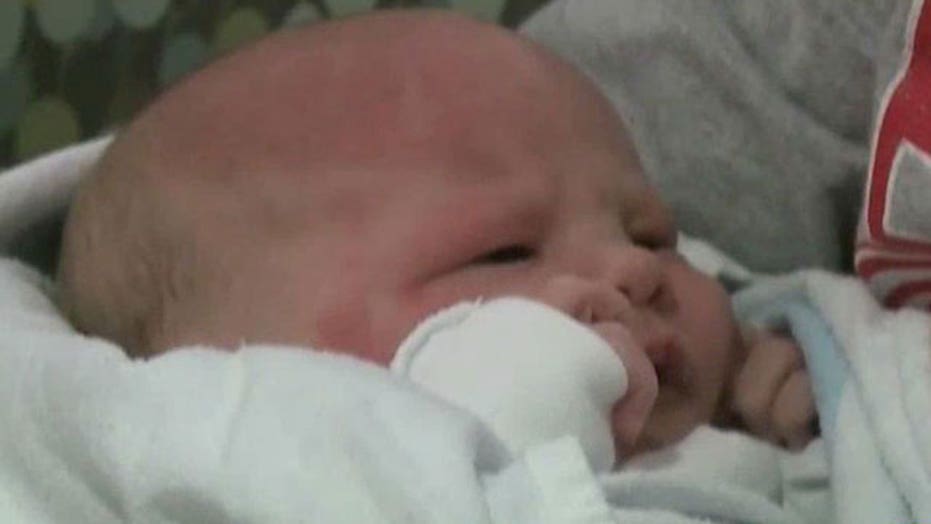 DETROIT – Pink paint? Not on the walls of the Schwandt family's home in western Michigan.

No Barbies required, either.

Jay and Kateri Schwandt of Rockford welcomed their 12th child this week — another son, born on Sunday — who immediately became the latest member of the family's burgeoning all-boys club.

The couple believed the latest baby might break the gender streak, especially after Kateri, known as Teri, was nine days past her due date. That was unusual for her pregnancies. But as it turned out, hardly a game-changer as a nurse at the Grand Rapids hospital announced the delivery: It's a boy. Again.

"Of course. There was a chuckle in the whole room," Teri, 38, said told The Associated Press on Thursday. "I looked at my husband, and we exchanged a knowing smile. When they say it's a boy, I think, OK, no problem. I've got this. We know what we're doing."

The latest entry is Tucker at 7 pounds, 12 ounces. Tyler is the oldest son at 21. When the school year starts, three Schwandt boys will be in high school, while five brothers are in lower grades. That leaves three more at home with Teri.

The Schwandts, who live north of Grand Rapids, consider themselves devout Roman Catholics who don't believe in using birth control and put the size of their family in God's hands. Teri comes from a family of 14 kids. But she's not the only member of her own family committed to the cause.

She has a sister in the Detroit area, Kate Osberger, who has 10 children of her own. Yep, all sons.

"That's amazing. This is a miracle," said Dr. Bob Barbieri, who researches fertility issues and is chairman of obstetrics and gynecology at Brigham and Women's Hospital in Boston. "It appears there is some type of genetic determination in some families that have a lot of girls or a lot of boys. It's not well understood. It's more than a statistical oddity."

A large brood brings many challenges, regardless of gender.

Daily trips to the grocery store and usually a weekly stop at a warehouse store when possible. School lunches can mean going through an entire loaf of bread each day. The Schwandts have a 15-passenger van — "the big bus" — that carries the clan to family gatherings and Sunday Mass. It helps that some boys are old enough to drive.

"I'll call and say I'm stuck. I need you to pick up Wesley from preschool," Teri said. "There aren't too many kids who get to know the preschool teacher."

At home, half of the 12 sleep in two bedrooms with bunk beds. Teri has a rule of no more than one pair of shoes for each kid in the entryway. Once the boys hit sixth grade, they do their own laundry.

"Someone's responsible for unloading the dishwasher and loading it. Someone vacuums the stairs," said Jay, 39, who has a land surveying business. "We heat the house with wood. We're cutting wood, hauling it and stacking it. They may not like it but they know they need to pitch in."

Teri said she's only known the gender of two babies before they were born. Believing a girl might arrive this time, the family settled on Jaynie for a name, a play on Jay's name. It wasn't needed, of course.

Maybe he'll still get the chance.