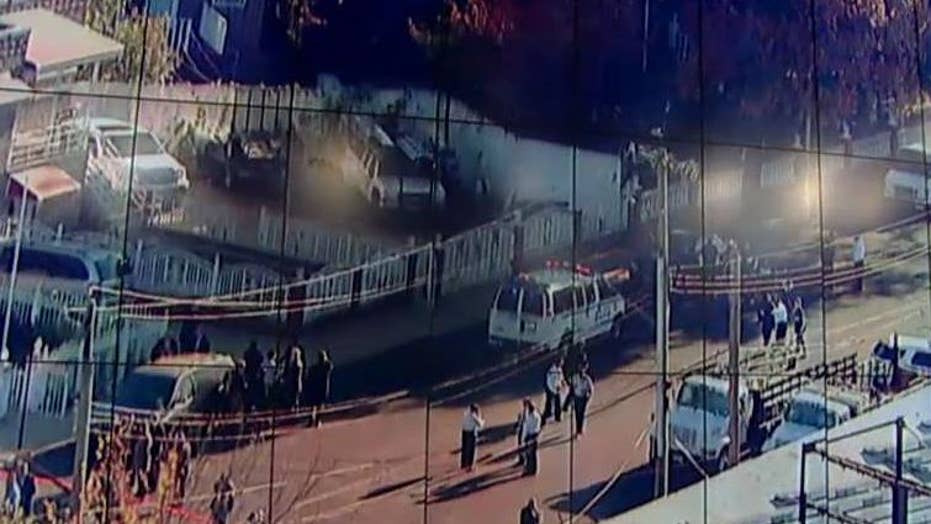 Cops were responding to robbery call

After two officers were fatally gunned down through the window of their squad car in 2014, the nation's largest police force embarked on an ambitious plan to outfit all of its squad cars with inch-thick bullet-resistant glass and armored door panels capable of stopping a round from a .44 Magnum.

But that ongoing effort does not cover the RV-like mobile command posts like the one in which a New York Police Department officer was shot to death through an ordinary window early Wednesday. Some are now questioning that decision, especially since such mobile command posts, which are often planted in neighborhoods for weeks, might actually be more vulnerable.

"The most important thing is protecting the officers who put their lives on the line every day. This should have been more of a priority," said state Assemblywoman Nicole Malliotakis, who wants to see such armor on every marked police vehicle on the streets.

The Staten Island Republican and mayoral candidate was among lawmakers who proposed mandatory retrofitting for every police car statewide in response to the execution-style slayings of NYPD officers Rafael Ramos and Wenjian Liu in 2014.

A police officer works near the site where an officer was killed in the Bronx section of New York, Thursday, July 6, 2017. Police officer Miosotis Familia was shot to death early Wednesday, ambushed inside her command post by an ex-convict, authorities said. He was later killed after pulling a gun on police. (AP Photo/Seth Wenig) (Copyright 2017 The Associated Press. All rights reserved.)

City Councilman Jumaane Williams pushed similar legislation after the officers' deaths but said it wasn't an easy sell because of the high cost and concerns that officers would be hampered by the thick, heavy windows that don't roll down.

"I wish we could have discussed it more after the last tragedy," said the Brooklyn Democrat. "Now we'll need to discuss it again."

After initially testing the armor on a few cars, Mayor Bill de Blasio in January announced a $10 million program to retrofit the entire fleet of 3,800 marked and unmarked patrol cars. So far, about 2,200 cars have been retrofitted with ballistic panels or with both the panels and bullet-resistant glass.

There was no immediate comment from City Hall on Thursday about whether the city was now considering expanding the program.

Experts say that while fortifying police vehicles is worth it to save even one life, it isn't a panacea for gun violence against police officers. They also suggest that posting officers in stationary command centers can make them sitting ducks for anyone planning an attack.

In the case of Wednesday's slaying of 12-year NYPD veteran Miosotis Familia, she had been assigned to work out of a command vehicle that had been placed in a high-crime section of the Bronx after a triple shooting three months ago.

A police officer stands near the site where an officer was killed, and flowers have been left, in the Bronx section of New York, Thursday, July 6, 2017. Police officer Miosotis Familia was shot to death early Wednesday, ambushed inside her command post by an ex-convict, authorities said. He was later killed after pulling a gun on police. (AP Photo/Seth Wenig) (Copyright 2017 The Associated Press. All rights reserved.)

"I'm not a big believer in predictability in police work," said Maki Haberfeld, a professor at John Jay College of Criminal Justice. "You have to be able to rotate positions and be on the move because it's much easier to plan something if you know what you're going to encounter."

NYPD COP KILLED IN BRONX: WHO WAS OFFICER MIOSOTIS FAMILIA

But she cautioned: "If someone is bent on killing a police officer, they can do it. ... This is just another layer of protection."

Other cities have explored fortifying their police vehicles. Los Angeles police officials say most of their patrol vehicles now have ballistic panels in the doors; however, the windows are not bullet-resistant.

Frank Merenda, a former NYPD captain who is now an assistant professor of criminal justice at Marist College, said the extra protection could give officers a tactical advantage but has its limitations.

"It's important to remember the job of the police is to fight crime and keep communities safe, which begins with engaging the community, not just fortifying themselves from it," he said.