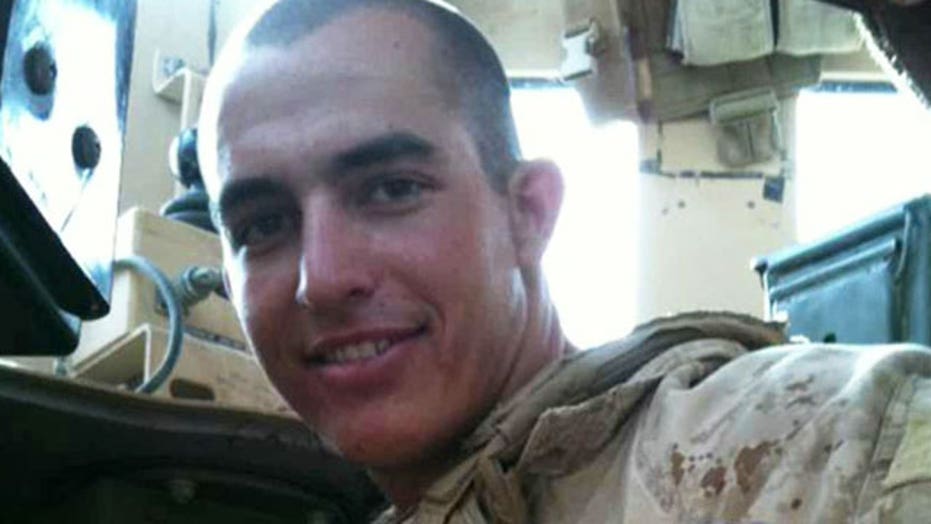 US Marine jailed in Mexico appears in court

On his 101st day in captivity in Mexico, Andrew Tahmooressi arrived at a Tijuana courthouse, where his new lawyer vowed to get justice for the Marine held since March after mistakenly crossing into Mexico with guns.

The evidentiary hearing, at which Tahmooressi is expected to finally tell his story to a judge, has been delayed by both Mexico's unpredictable legal system and Tahmooressi's trouble settling on a lawyer. Tahmooressi did not speak as he was brought in under heavy guard, but his lawyer, Fernando Benetiz, said the 26-year-old veteran of two tours in Afghanistan won't be reading from a script. And Benetiz said he will press the prosecution witnesses to get the truth.

"I hope they tell the truth, because if not, I'm gonna make them tell the truth and it's not gonna be pretty," Benetiz said, prior to the hearing, set for 11:30 a.m. local time

"Andrew expressed his hope to be released on Wednesday as the judge will hear his statement and conclude non-intentional approach of the U.S.A.- Mexico border," Jill Tahmooressi said.

Tahmooressi has been held since he accidentally drove into Mexico at the San Ysidro, Calif., Port of Entry late March 31, after becoming disoriented from poorly lit street signs and being in a position on the road unable to make a last ditch U-turn. His family believes his post-traumatic stress disorder also may have contributed to his confusion. He was charged with violating Mexico's strict gun laws because he had three registered guns, along with all his worldly possessions, in his vehicle.

Tahmooressi, 26, appeared in court on April 28, but that hearing was gaveled before it began after the judge learned Tahmooressi had his attorney fired the night before for advising Tahmooressi to commit what the family considered to be perjury.

The Wednesday hearing is expected to begin like the aborted April session, with Tahmooressi being transported to the downtown Tijuana courthouse from El Hongo Prison in Tecate under heavily-armed guard.

Bringing weapons into Mexico is a violation of the country's federal law. Complicating Tahmooressi's plight at the time of his arrest was that he had military-grade weapons and ammunition, as defined by Mexican statute.

He was in the San Diego area for treatment of combat-related PTSD, having recently moved from Florida, and had all of his possessions, including the legally-purchased weapons, in his vehicle when he was stopped at the border.

Tahmooressi served two tours of duty in Afghanistan, where he was involved in an IED attack that destroyed the vehicle he was driving in. Because of his leadership and heroism in the field, Tahmooressi received a battlefield promotion to sergeant.

On July 8, Hunter and Rep. Lee Terry, R-Neb., sent a letter to Escobedo, imploring him  to take into consideration the circumstances surrounding his accidental entry into Mexico.

Joe Kasper, deputy chief of staff for Hunter, said the lawmakers wanted to show Tahmooressi has overwhelming support across the border, and that the case is being tracked very closely.

"The letters will be used by the lawyers to show the deep support for Andrew and that quick resolution is important in the interest of the broader U.S.-Mexico relationship," Kasper said.

The delays in his case were precipitated by multiple changes in his defense team. Since April 28, Tahmooressi has had three defense attorneys, including Benitez.

Despite the apparent sincerity of Tahmooressi's mistake, there is a likelihood the case will run its course, according to Benitez.

"This is a federal court and as in any democratic nation you will not find an executive calling up a judge and ordering the release of a suspect," Benitez told FoxNews.com after his hiring. "It makes no difference if it is a mayor, governor, or the president, there's not a phone call in the world that will change this."

Wednesday's hearing will include Tahmooressi's first opportunity to explain what happened March 31, and plead for his release. Also testifying will be the Mexican customs officials and soldiers who detained him at the border.

Benitez said  he will be concentrating on the fact that Tahmooressi was held at the border by the Mexican military for some seven hours before being formally charged.

A spokesman for the Mexican Embassy in Washington said that Tahmooressi was neither in a Marine uniform nor on official duty when he crossed into Mexico.

"In Mexico, as in the United  States, ignorance of the law, error, or failure to understand the consequences of violating the law do not exempt individuals from responsibility, regardless of intention," said a factsheet on Tahmooressi's case provided by Ariel Moutsatsos Morales Basilio.

He said in Mexico, unlike in the United States, there is no prosecutorial discretion, and that once a prosecutor has enough evidence to suggest that a crime was committed, he or she is obligated by law to prosecute.