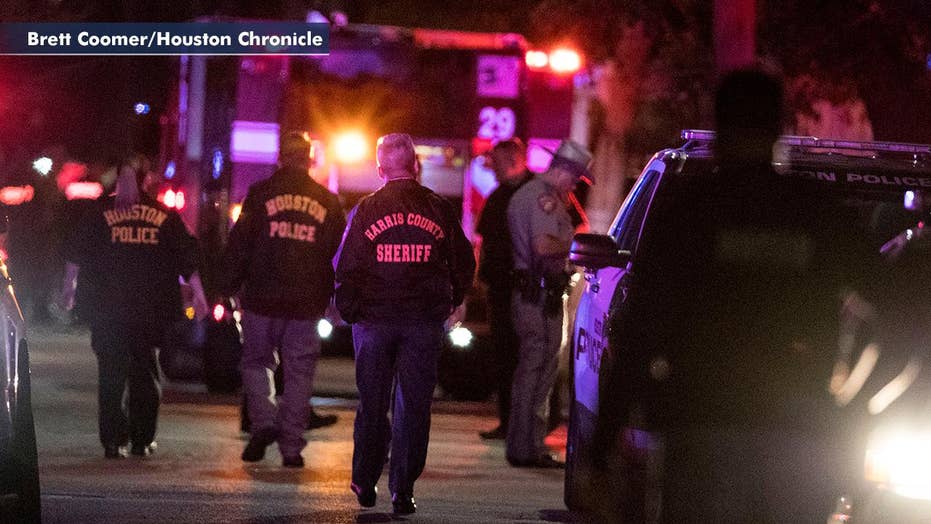 5 police officers were injured in Houston, Texas with two in critical condition after suspected drug dealers opened fire during a search warrant execution; Casey Stegall has the latest.

A hospital on Monday announced that it released one of the five Houston police officers injured earlier while serving a search warrant at a home of suspected drug dealers.

Two suspects were shot and killed in the exchange with police.

Houston police tweeted that the fifth officer was released Monday night after being treated for a gunshot wound to the shoulder.

At about 4:15 p.m. local time, a group of about a dozen officers with the Houston Police's narcotics unit responded to a residence they suspected was a hub for drug dealing, particularly the sale of "street-level narcotics" like "black tar heroin," Houston Police Chief Art Acevedo said at an evening news conference held outside the hospital. The two suspects had opened fire on the team of officers.

"Narcotics officers tried to serve a search warrant," Acevedo said. "They announced themselves as police at the time. Immediately upon reaching the door, the officers came under fire from one or two suspects." One suspect, according to the police chief, momentarily retreated into the home and then returned to the front of the location to resume shooting.

"As a result of the exchange of gunfire," both suspects were shot by police and reported dead on the scene, Acevedo reported.

The names of the undercover officers were not released but they range in age from 33 to 54, with the oldest having been shot several times previously, according to Acevedo.

Details of the incident followed a series of tweets from the police department notifying the public of the situation.

"HPD responding to a scene at 7800 Harding where officers have been struck with gunfire following an encounter with a suspect," Houston police tweeted around 6:15 p.m. ET. "Officers are en route to the hospital. Please avoid the area and yield for emergency vehicles. Further updates will be provided as available."

“This evening’s horrific attack on police officers is a solemn reminder of the service and sacrifice our brave men and women in law enforcement make every day to keep us safe," Governor Greg Abbott said in a statement following news of the shooting.

"The city of Houston and the Houston Police Department will have whatever state resources they need to bring swift justice to those involved. I ask all Texans to join Cecilia and me in praying for the officers injured, and for the continued safety of all law enforcement officers who protect our communities.”

"This has been a tough day for our city," Houston Mayor Sylvester Turner said at the Monday night news conference. "We want to work night and day to make sure our city remains safe. I’m just very grateful and thankful for everyone who has come together in this moment."

Fox News' Casey Stegall in Houston and The Associated Press contributed to this report.