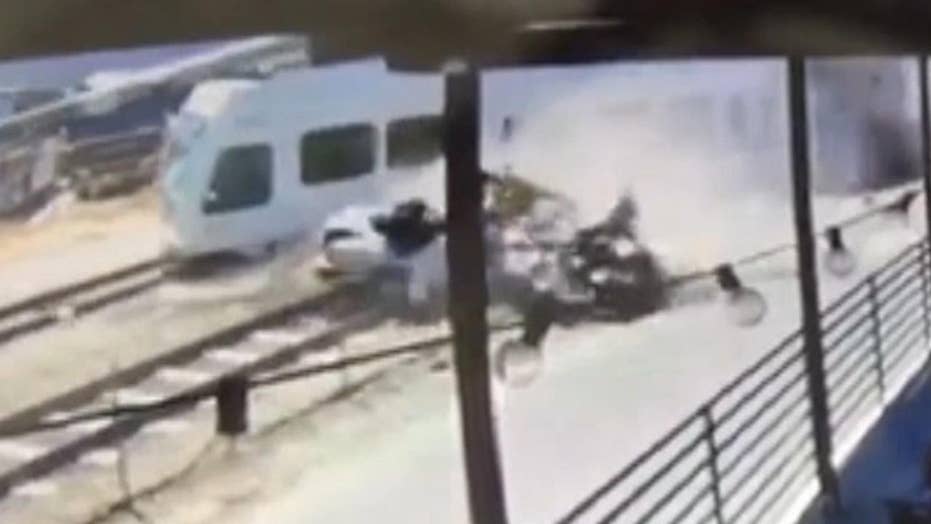 Deadly collision between car and train caught on camera

Two people were killed after a train and a car collided in California on Sunday in a dramatic crash captured by the cameras of a nearby brewery.

In security video from a nearby brewery, customers can be seen sitting outside when the train strikes the car, dragging it along as the train runs off the tracks.

"The corner of my eye just happen to see this dude turning right when the train came and hit him and for a half a second my brain didn't register what it was and then you heard the loudest sound you've ever heard," witness Ryan Stern told ABC7.

San Jose Police said the crossing arms at the railroad crossing were functioning, but the driver of the vehicle tried to drive around them when he was hit by the train. Both of the people in the car were killed in the crash, while the train operator and 20 passengers sustained no serious injuries.

Transit officials told KTVU the crash damaged an overhead pole and wires that power the train that will need to be repaired. The crash remains under investigation, but officials stressed people should always exercise caution near an active railway.

"We're just encouraging everyone that safety is really everyone's job so whether you're a pedestrian, driving a vehicle or a bicyclist, we all need to exhibit caution with the crossing gates, signs and platforms," VTA Spokesperson Holly Perez told ABC7.