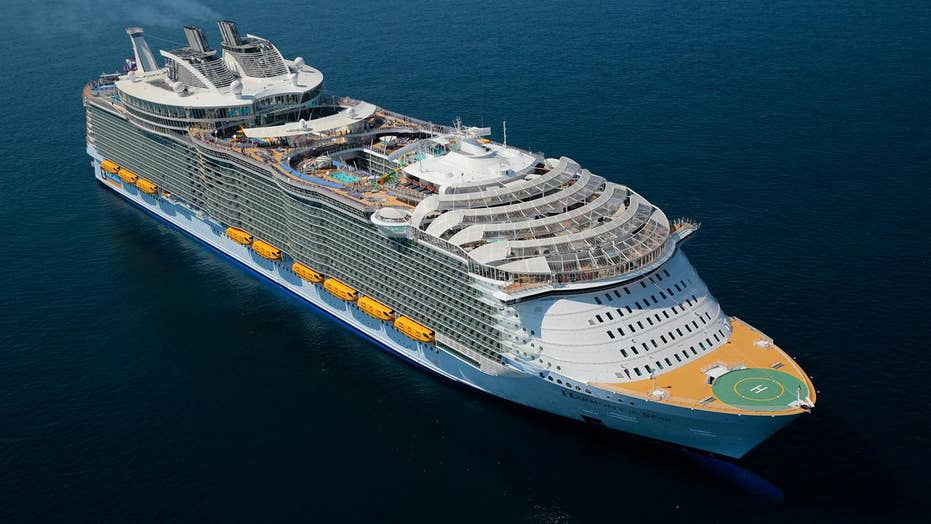 Symphony of the Seas: The world's largest cruise ship

Royal Caribbean's newest ship the Symphony of the Seas is looking to hold on to the title of World's Largest Cruise Ship, weighing in at 230,000 tons, with over 2,759 staterooms, and can carry 5,5000 guests.

If you combined a massive theme park with a cruise liner bigger than Titanic, this would be it.

Earlier this week, Royal Caribbean International announced further details for their grandest vessel yet, dubbed Symphony of the Seas. Set to break records as the world’s largest cruise ship by gross tonnage, the luxury liner will weigh in at 230,000 tons, measure feature 16 guest decks.

Symphony of the Seas is currently under construction in France. (Royal Caribbean International)

CARNIVAL PARTNERS WITH DR. SEUSS FOR 'HORTON HEARS A WHO!' CRUISE

Currently under construction at a shipyard in France, the Symphony of the Seas' maiden voyage is set for April 2018, according to a press release. The cruise liner will carry 5,500 guests at double occupancy across over 2,759 staterooms — including a two-level family suite — but guests need not worry about congested amenities and entertainment.

The Symphony of the Seas will feature a sports bar in its Boardwalk neighborhood. (Royal Caribbean International)

The ship boasts seven distinct “neighborhoods," with such names as Central Park, Boardwalk, Royal Promenade, and an entertainment center called Entertainment Place. The boat will also feature 18 restaurants, a spa, youth zone, and a 10-story water slide in the pool area.

Calling the ship their "boldest composition yet," Royal Caribbean International President and CEO Michael Bayley is confident that the liner will surpas expectations.

The two-floor family suite offers a slide to take guests from the upper to lower levels. (Royal Caribbean International)

"We set out to create a new level of vacation adventure and deliver the ultimate escape for families of all shapes and sizes," he said. "Symphony will introduce the most cutting-edge, customizable and digitally-enhanced experiences in the Royal Caribbean fleet."

The ship will have its own "Sugar Beach" candy and ice-cream shop for guests with a sweet tooth. (Royal Caribbean International.)

DISNEY CRUISE ACCIDENTALLY BACKS INTO PIER IN THE BAHAMAS

The arrival of Symphony marks the fourth ship in Royal Caribbean’s exclusive Oasis line, and the company’s 25th ship overall.

While the boat is unquestionably sophisticated, the cruise is totally kid friendly. From a LEGO wall to a water park to laser tag, Symphony is aiming to offer fun for the whole family.

Symphony will depart from the Mediterranean and cruise around European seas through summer 2018, before heading home to port in Miami in November and setting sail for the Caribbean.

When construction is complete, the massive craft will dethrone its sister ship, Harmony of the Seas, as the world’s largest vessel.

So if it's a grand cruise you seek, Symphony of the Seas likely sounds like music to your ears.