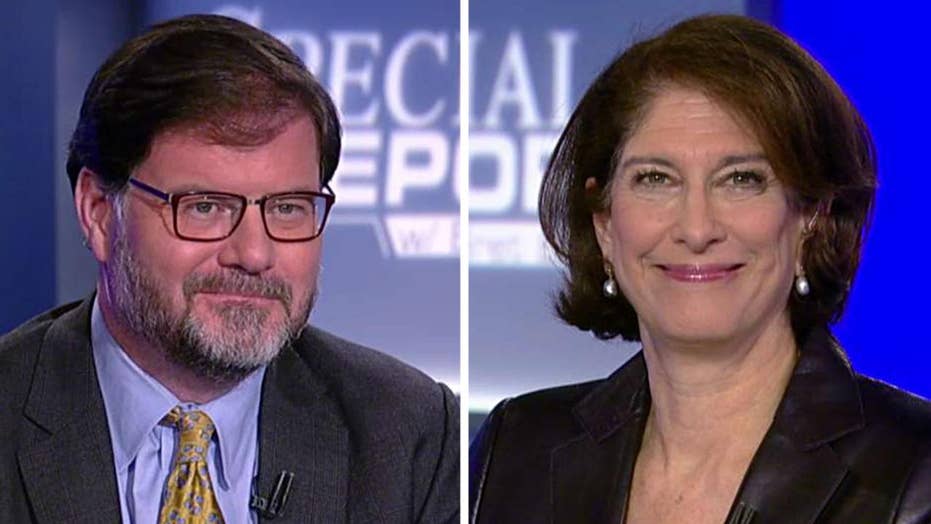 What would happen if President Trump fired Robert Mueller?

FBI raids of home and office of president's personal attorney reverberate through Washington; reaction from the 'Special Report' All-Stars.

This is a rush transcript from "Special Report with Bret Baier," April 10, 2018. This copy may not be in its final form and may be updated.

PRESIDENT DONALD TRUMP: So I just heard that they broke into the office of one of my personal attorneys.

REP. JIM JORDAN, R-OHIO: Yesterday we had the FBI raid the president's attorney's residence and his business and got information that is privileged information. What a double standard we see.

SENATE MINORITY LEADER CHUCK SCHUMER, D-N.Y.: Mr. President, attorney-client privilege is alive and well. But there is an exception when the attorney might be involved in a crime or fraud.

SEN. MARCO RUBIO, R-FLA.: It's part of the judicial process. He should let it work its way through.

BRET BAIER, ANCHOR: Despite a lot of the day being taken up by the CEO of Facebook testifying on Capitol Hill, this is still a big story here in this town. And the president is weighing in on his personal attorney and the raid on his office and apartment or hotel room, tweeting, "Attorney-client privilege is dead!" and "A total witch-hunt!" Just a short time ago, Michael Cohen, that attorney, had a quote to CNN, quote, "I am unhappy to have my personal residence and office raided, but I will tell that you members of the FBI that conducted the search and seizure were all extremely professional, courteous, and respectful, and I thanked them at the conclusion." You heard some of the pushback of this action. Here is Alan Dershowitz.

ALAN DERSHOWITZ, HARVARD LAW PROFESSOR EMERITUS: This is a very dangerous day today for lawyer-client relations. I deal with clients all the time. I tell them on my word of honor that what you tell me is sacrosanct. And now they say just based on probable cause, even though this was cooperation with Cohen, they can burst into the office, grab all the computers, and then give it to another FBI agent and say you are the firewall.

BAIER: Dershowitz is at the White House we're told right now, had a meeting with President Trump and is apparently having dinner with him.

MARA LIASSON, NATIONAL PUBLIC RADIO: Well, this is an investigation that's getting awfully close to the president. I thought what was really interesting yesterday is you had some polite pushback from Republicans. You had Mitch McConnell saying the investigation should go forward. You had John Cornyn saying that Mueller's report should definitely be given to Congress, which is not required. You also had Chuck Grassley saying it would be suicide to talk about firing Mueller, and this comes after people who are talking to the president, outside advisers are saying that he is as mad as he has ever been and the idea of possibly firing Jeff Sessions is very, very live.

LIASSON: Because that's the way you get rid of Mueller.

LIASSON: Rosenstein or Sessions. You have to either replace the attorney general with someone who is not recused, fire Rod Rosenstein. That's the way you get rid of the special counsel.

BAIER: You've heard all kinds of punditry, Jonah, about this is a move that tangential to the Russia investigation designed to have the president do what he is potentially contemplating doing, and that is fire Mueller and thereby make the case for obstruction of justice pretty clear.

JONAH GOLDBERG, NATIONAL REVIEW: The funny thing about this, or the weird thing about this is that, forget whether it's political suicide or all those things, it would be pointless to fire Mueller because Mueller is not doing the Michael Cohen investigation. He handed it off to the U.S. attorney for the Southern District of New York who is not working for Mueller. If you fired Mueller, that thing continues to go. The only way to get rid of that investigation is to fire the Trump appointed interim director of the U.S. attorney's office --

BAIER: One second. He recused himself.

GOLDBERG: Right, but you have got to put somebody in there who will then kill this investigation. Politically, that is just -- the optics of trying to make it all go away now I just think are almost impossible. But maybe I'm wrong.

MATTHEW CONTINETTI, WASHINGTON FREE BEACON: It's important to ask how President Trump found himself in this situation to begin with and that was by firing James Comey. And after Comey's firing, Comey leaked the memos which then led to the appointment of the special prosecutor. So now if President Trump thinks can he fix this situation by firing the special prosecutor, doesn't make much sense. The first firing led to more problems for him.

LIASSON: There is one situation where maybe he could do this if the Republicans hold onto the House of Representatives. Then maybe he could fire him. Because if he fired him now, it would help Democrats, I think, in the election. And if Democrats took over, they would -- even if Mueller was fired, they would probably have him up testifying seven days a week.

CONTINETTI: Donald Trump has been a disrupter to Washington. He has everybody reacting to his actions, with one exception -- Robert Mueller. He's the other disrupter. And the two of them now in combat could lead to a very combustible situation.

BAIER: It's definitely combustible. Speaking of combustible, the decision on Syria we're told is imminent if it's not already been made, and that some action may be imminent. Here is the president today.

TRUMP: We are making a decision as to what we do with respect to the horrible attack that was made near Damascus, and it will be met forcefully.

BAIER: Their meeting with the Oval Office with the Qatari emir. You remember a short time ago the president, Mara, said that Qatar was responsible for supporting terrorism. So quite a turnabout here.

LIASSON: How fast things change in Trump world whether it's in foreign policy or ex-advisers. Everything is pretty fluid and flexible as he likes to say.

BAIER: But we do think that there is likely some imminent action?

LIASSON: I think there is. To me the question is it going to be like what he did almost exactly a year ago where he hit an airfield, didn't deter them from using chemical weapons again. Is it going to be something more, take out Syrian air force, that would risk a confrontation with Russia. What's he going to do that will actually have deterrent effect because the last thing he did didn't work.

GOLDBERG: I think Donald Trump needs to do something. He didn't call it a red line, but by doing it the first time he basically set a precedent that says, you know --

LIASSON: He did actually call it a red line the first time. He said there were a lot of red lines.

GOLDBERG: I guess that's right. My point is that it would be a loss of credibility for Donald Trump and the United States if he didn't do it now, and I think he is going to do it now, and he should do something now. What he does, I'm not sure.

The real problem for me is Syria is just looking to be basically the Balkans of the 21st century with so many, and it's not even the Spanish Civil War anymore which at least had two sides to it. The place is just a hot mess, and how we figure out a strategy about how to fix the place or do anything or whether we should even try or at least minimize the damage is very difficult to see. Russia feels like it is in their sphere of influence and they have a lot of political capital invested in the place. And it's a thorny issue to figure out what we can do about it.

BAIER: As I have heard different pundits and different folks question whether this in fact was Syria who did this, I talked to a number of officials who say they have pretty solid evidence and that they are going to be briefing as much as they can beyond the classified. You heard the president in the cabinet room saying we have a good idea. This is probably going to happen.

CONTINETTI: I think so. And I think it's important for President Trump to understand that the logic of deterrence means that whatever action he takes will have to be larger than the action he took after the attack last year, which I do think deterred Assad for a time until he felt that the attention was no longer being paid. So the person to watch --

GOLDBERG: And Donald Trump announced we are going to pull out of Syria.

CONTINETTI: That's right. And the person to watch now, though, is Bolton, who has already been reluctant about involving us heavily in the Syrian civil war or changing the regime. But I do not think he is averse to really having the full might of the United States military raining down on the weaponry of Assad.

BAIER: He's also not averse to shaking up the staff. We are told Tom Bossert is leaving because John Bolton wants his own people there. If you take a list notable Trump resignations or firings we are now up to the number of 31. Tom Bossert on the bottom right-hand corner there, homeland security adviser being the latest. Mara?

BAIER: Happens all the time.