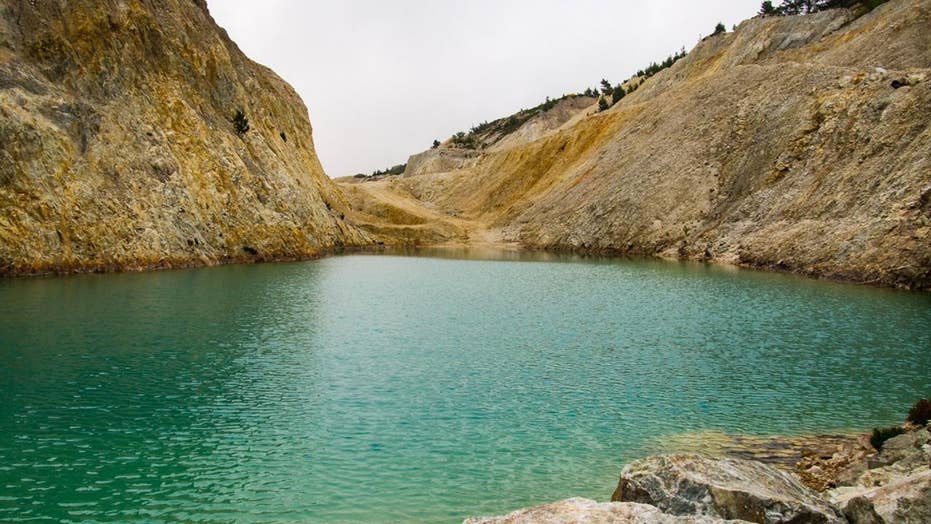 These pure blue waters are not as ‘pure’ and safe as they seem.

Local activists in Galicia, Spain, are urging government officials to intervene after multiple tourists have been reportedly hospitalized after swimming in an Instagram-famous, turquoise lake that is in fact a chemically contaminated “toxic dump.”

Last week, two Instagram influencers revealed that they had been recently sickened after coming in contact with the sparkling blue waters of the Monte Neme “lake,” the Independent reports.

According to the outlet, the glittering waters have become something of a sensational Instagram destination – though the reality of their history isn’t quite so pretty.

An image of the Monte Neme waters in the Galicia region of Spain. Local activists are urging government officials to intervene after multiple tourists have been reportedly hospitalized after swimming in the Instagram-famous lake. (iStock)

Alternatively nicknamed the “Galician Chernobyl,” the waters of Monte Neme fill an old quarry that connects to what was once a World War II-era Tungsteen mine, The Daily Telegraph reports. The mine was formally abandoned in the 1980s.

Today, the waters of the “toxic dump” get their alluring blue hue from chemical contamination. Meanwhile, visitors who get too close to the so-called lake are allegedly paying the price with their health.

Spanish news site Publico reports that multiple tourists have been hospitalized for splashing in Monte Neme, suffering a slew of nasty reactions to the skin and digestive system in search of the perfect selfie.

An influencer named Uxia told Publico that even though the rash she sustained from Monte Neme was unpleasant, “the picture was worth it.”

Another unnamed Instagram user said that she was “very annoyed” to suffer vomiting and a skin rash after swimming in Monte Neme, as the group she traveled with didn’t realize that the “very pretty” waters were so harmful.

Now, one medical professional is warning adventurers of the potential health risks of coming in contact with the Monte Neme waters.

“Brief exposure will most likely cause eye and skin irritation but a longer time in the water and digestion of the toxins could cause stomach problems, vomiting and diarrhea,” Manuel Ferreiro, a doctor at University Hospital of Coruña, told European news site The Local.

Reps for a local environmental lobby group called Salvemos Cabana are pushing lawmakers to inform the public of Monte Neme’s dangers and limit access to the lake.

The Instagram-famous, turquoise lake is in fact a chemically contaminated “toxic dump.” (iStock)

In similar headlines, a turquoise lake in Siberia recently made news for its trending popularity on social media — despite its history as an artificial, toxic waste dump.