On May 5, flight 1128 from Las Vegas to Tampa diverted to land at Dallas/Fort Worth International Airport (DFW) after passengers complained about an odor in the aircraft, CBSDFW reports.

Passengers aboard the Florida-bound flight reportedly told the outlet that “many people” were getting sick from the scent, and that at least one person was evaluated by DFW medical personnel upon deplaning.

On May 5, flight 1128 from Las Vegas to Tampa diverted to land at Dallas/Fort Worth International Airport (DFW) after passengers complained about an odor in the aircraft. (iStock)

Reps for the carrier, meanwhile, confirmed to Fox News that the cabin crew chose to divert to DFW for a “full mechanical inspection.” In addition, passengers were soon placed on another flight to Tampa and issued both refunds and travel credits for the trouble.

“Spirit flight 1128 from Las Vegas to Tampa landed safely in Dallas following reports of an odor onboard. Out of an abundance of caution, the crew decided to divert to DFW for a full mechanical inspection,” Stephen Schuler, director of communications for Spirit, told Fox News on May 6. “No injuries were reported and the crew continued on the next flight.”

“We are investigating the source of the smell and we have placed guests on another plane bound for Tampa. We apologize for any inconvenience to our guests, and we have issued refunds and future travel credits,” he continued.

As for reports of ill passengers from the strange smell, Schuler’s account differs from that of CBSFDW’s.

The Spirit rep told Fox News that “social media mentions of fumes from the plane and sick guests are inconsistent with reports from our teams on the ground and onboard.”

Just two days before, another Spirit Airlines flight was forced to land early due to an odd odor in the high skies.

On May 3, a Spirit Airlines flight from Los Angeles to Denver was forced to return to LA after crew members reported a strange smell “in the cockpit and cabin,” a Federal Aviation Administration official told Fox News. 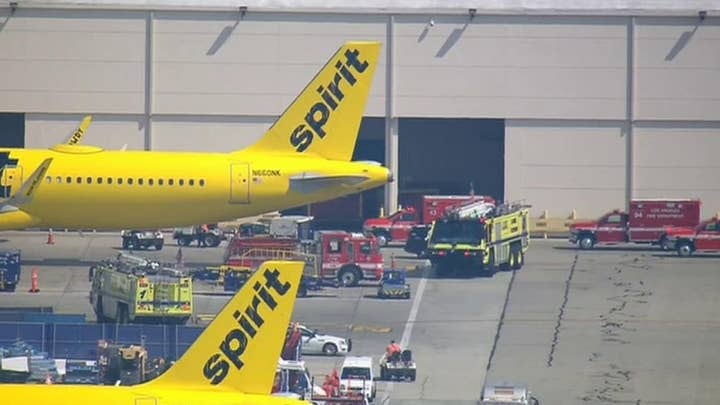 Los Angeles Fire Department personnel responded to the scene evaluated the passengers. According to Spirit, one person was sent to the hospital for further evaluation.

In similar headlines, back in April, another Spirit flight headed for Florida was grounded in Maryland after an “unknown odor” in the cabin was detected. All seven crew members were taken to the hospital for evaluation.