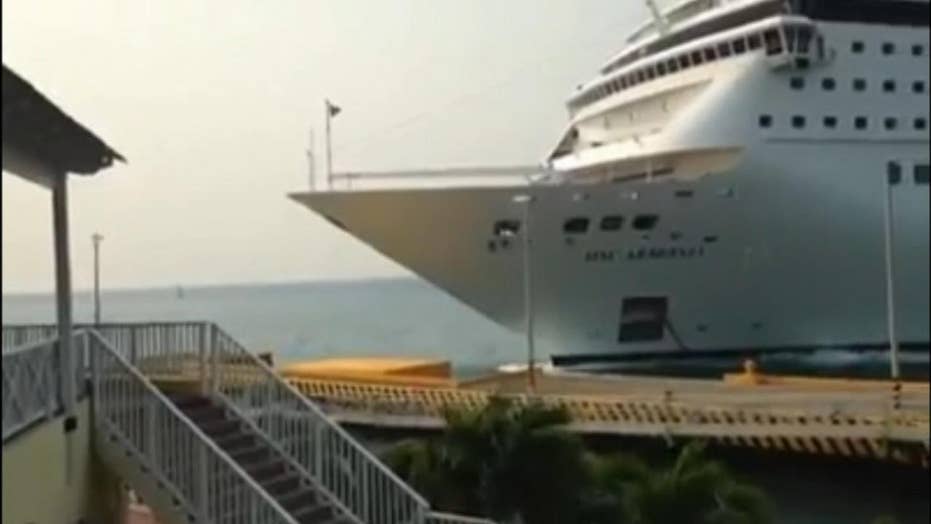 Watch the dramatic moments before a cruise ship crashes into a dock in Honduras. No one was injured in the incident. The MSC Armonia is expected to continue its journey once repairs have been made.

MSC Cruises is investigating why one of its ships “deviated from her course” and ended up tearing apart a dock in Honduras on Tuesday morning.

The MSC Armonia, which is in the midst of a weeks-long cruise to the Caribbean, was heading into Port Coxen Hole on the island of Roatán when it failed to slow to a stop and crashed into the dock before running aground on the beach, NPR reported.

Footage of the incident shared by YouTube user gCaptain shows witnesses looking on in shock as the MSC Armonia tears into the pier — along with the sounds of the structure crunching under the weight of the 65,000-ton ship.

One of the men heard in the video repeatedly yells for others to “get out of the kitchen” of a nearby restaurant, according to USA Today.

"While maneuvering alongside, for reasons that are currently still being duly investigated, the ship deviated from her course and grazed the end of the pier," said a spokesman for the cruise line in an emailed statement to Fox News.

"There was never any risk for guests or crew on board," added MSC. “There was also no impact for the environment.”

Crew members attempted to slow the ship upon realizing it was traveling too fast into port, according to NPR, reportedly by throwing two anchors overboard just before the ship hit the dock.

But while the anchors may have been deployed too late to slow the vessel’s entry into port, damage to the MSC Armonia itself was said to be minimal.

"As to the ship, the damage was minor,” MSC stated. “She has also since been cleared by Honduran Port State Control authorities to continue her journey as soon as the necessary repairs are concluded. At the present time, ship personnel and external experts are still at work to complete such repairs."

MSC’s statement further confirmed that passengers were not affected by the incident, and that the MSC Armonia has already left for its next port of call in Belize on Wednesday morning.

The MSC Armonia’s accident follows a similar cruise-bruising incident from October 2017, in which the Disney Dream accidentally backed into a pier in the Bahamas and caused “minor” damage to the hull of the vessel. (WARNING: The clip below contains explicit language. Viewer discretion is advised.)