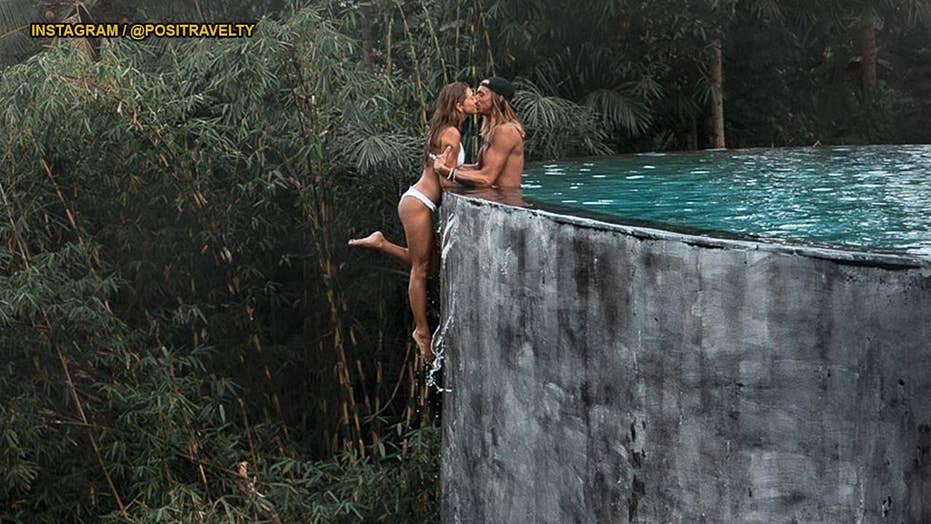 Kelly Castille and Kody Workman, a couple famous for posting photos of their exotic travels on their Instagram profile, are defending a potentially dangerous photo op that has been criticized as 'stupid' and 'ridiculous.' In the controversial photo, the couple kisses as Workman stands inside an infinity pool holding Castille up by her back and shoulders as she dangles on the other side of the pool over a seemingly endless abyss.

One Instagram-famous travel couple is defending what’s been criticized as a “stupid, ridiculous” photo op that some fear could have had a fatal end, insisting that they were safe the entire time and that the image was edited for “dramatization.”

Last week, Kelly Castille and Kody Workman shared a snap taken in Ubud, in Bali, Indonesia, to their joint Instagram account @positravelty and their following of 62,000, Insider reports.

In the controversial photo, Workman stands inside an infinity pool and holds up his sweetheart by her back and shoulders as the lovebirds kiss, while Castille dangles on the other side of the pool structure over a seemingly endless abyss.

Though the daring image has since earned over 18,000 likes online, detractors were quick to declare the American couple “morons” for putting themselves in harm’s way for the sake of a picture.

“What a stupid ridiculous photo. When one of you falls and meets your death than we will see if Instagram was worth it, idiots” one cynic clapped.

“Dumbest thing I’ve seen today. Imagine if she fell, all for the sake of a little internet fame,” another agreed.

“You know, other people are gonna start dangling themselves from infinity pools and dangerous like this also to get a shot like this. Way to set an example,” someone else said.

“Why is the woman always the one risking themselves for pictures [?]” another asked. “Never see a guy hanging over a cliff.”

Fans, meanwhile, countered that the “epic” shot made for an “awesome” picture that Castille was “brave” to take.

“Feeling like the picture depicts the trust and strength of love you have for each other. Kelly trusts Kody enough and Kody knows that he’s strong enough to hold her not to fall,” an admirer gushed.

“I don't even know why [there] is so much backlash on this picture... It just shows how much they trust each other and have faith in each other,” another agreed.

The couple, meanwhile, has since said that taking the picture happened in a safer situation that it may appear, and that they went for the shot in good fun.

“As for safety, we are all responsible for ourselves at the end of the day,” Castille and Workman told Fox News on April 11. “The reality is that we felt safe, stable and confident for two reasons. First and foremost, there is another pool below that we cropped out of the shot for dramatization. Secondly, we thought about this photo for days, considering the angles and potentials.”

“We are travelers, adventurers and above all, creatives. Life is about perspectives and it is important to review them all,” the pair continued. “As for the backlash... we know we were safe. A fall would have been nothing more than a nice splash and sprint up the stairs to try it again.”

The Louisiana woman, 33, and Michigan man, 32, met a year-and-a-half ago while traveling, Insider reports, and have enjoyed a glam tour of the world together ever since. They launched their Instagram account in May 2018.

Meanwhile, it wouldn't be the first time in recent months that a couple has caught heat for pulling a seemingly dangerous stunt for a picture-perfect photo. 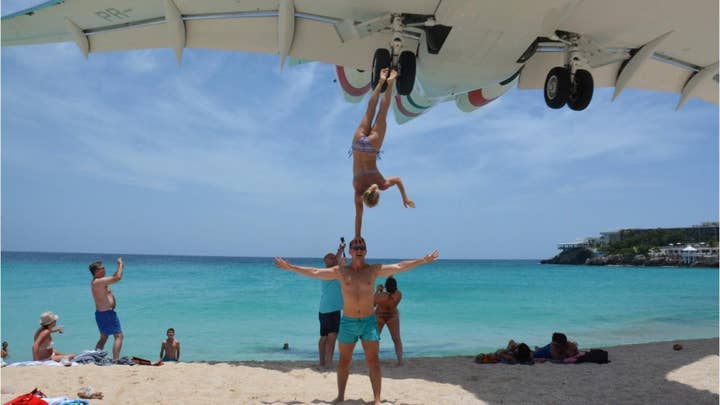 Last July, a sporty couple was criticized for performing a one-handed headstand feat on a beach in Saint Martin — inches away from a low-flying cargo plane that had killed a tourist the year prior.

Fast-forward to March, when another Instagram-famous travel couple was slammed for dangerously posing out of a moving train in Sri Lanka for the perfect smooching shot.