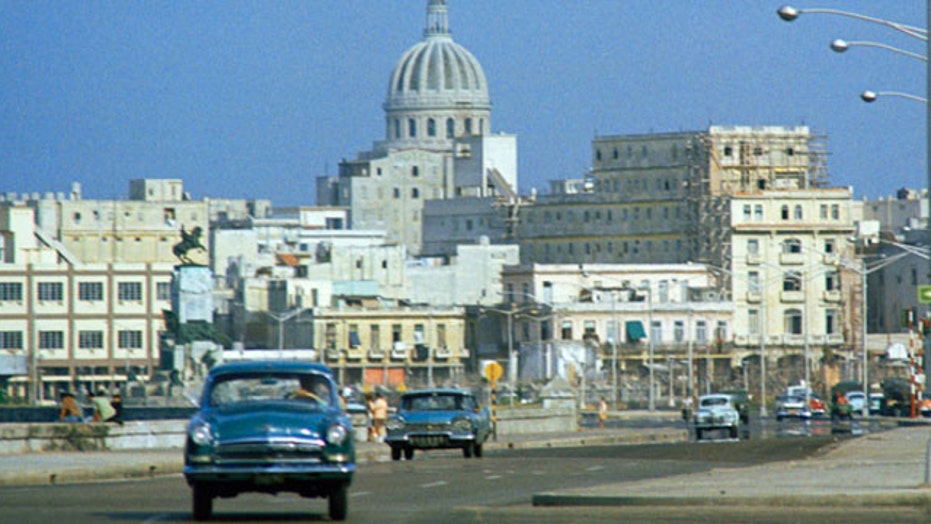 The more something is off-limits, the more we want it.

When it comes to travel, a “Do Not Enter” sign is almost like a beacon, welcoming us into the garden of forbidden fruits. Of the nearly 200 countries in the world today, some, like Angola and North Korea, make it incredibly hard for Americans to visit.

But today borders are actually more open than they were in the past 50 years. Cuba, Iran, Nicaragua and even the former Soviet Union. Today, they read like a millenial’s bucket list. But back in our parents’ day, they weren’t even considered vacation contenders.

If you want to visit a time capsule close to the U.S., go to Cuba. Between 1953 and 2014, visiting this communist island nation 90 miles south of Florida as a tourist violated the U.S. embargo. It’s the only time in history the U.S. government has prohibited Americans from visiting another country.

Travel restrictions eased up in 2014 when President Barack Obama pledged to restore full diplomatic relations with Cuba. Still, solo visits weren’t possible until March 2016 when people-to-people trips became one of the 12 categories of trips recognized for legal travel to Cuba. Cubans, for the most part, are excited to host their northerly neighbors. “The tension was between two governments, never between the people,” points out Greg Geronemus, co-CEO of smarTours. “Not only do millions of Cubans have extensive family connections in the U.S., but we also share many passions, including baseball.”

If You Go: “The most important thing to remember when visiting Cuba is that it is still very isolated,” says Jackie Caradonio, Senior Travel Editor at Robb Report. “Internet is scarce, ATMs are even scarcer.” Caradonio recommends booking with a tour operator with offices in the U.S. and Cuba.

Before the Iron Curtain fell in 1990, American travelers were scarce in the 8.5 million square miles making up the former Soviet Union. Tensions between the U.S. and the U.S.S.R. were high during the Cold War-- and the Soviet Union required most foreigners to follow tightly controlled itineraries designed by the communist government. For example, hotels and activities were assigned to tourists and not revealed in advance. Americans who did manage to secure a visa were subject to extreme propaganda and censored, and often recorded, interactions with locals.

If You Go: “Russia used to be popular, but unfortunately that’s declined lately due to sanctions and an unfriendly policy toward gay travelers,” says Sophia Kulich, a Ukraine native who fled to the U.S. in 1983 to escape religious discrimination. Kulich now leads heritage tours to former Soviet Bloc countries. She currently recommends Georgia, Armenia and Azerbaijan for their mountains and ancient monasteries and Lithuania Latvia and Estonia for their affordability and architecture. For a more extreme experience, check out Chernobyl. Starting in May, Explore will be offering guided tours of this radioactive site—a designated exclusion zone since the 1986 nuclear catastrophe.

“The idea of Iran being off limits to Americans is just a ‘feeling’” says Annie Lucas, Vice President of MIR Corporation, a company with more than 15 years of travel experience in Iran. The U.S. State Department has imposed economic sanctions on Iran since 1979, but unlike it did with Cuba, it never prohibited Americans from visiting. “It’s always been possible,” adds Lucas, “It just hasn’t felt right.”

But in January 2015, major international sanctions on Iran were lifted when it passed nuclear weapons plans tests. As a result, this infamous country is now on the radar of Americans seeking a different kind of adventure in the Middle East. In 2015, Intrepid Travel saw a 120 percent uptick in bookings on its Iran departures from the U.S. In 2017, the tour operator is offering an 37 departures.

If You Go: Be patient. There is no Iranian embassy in the U.S. and obtaining the required visa via mail can take months. Lucas calls Isfahan exquisite and recommends visiting its bazaar, one of the largest and oldest in the Middle East. She also says Persepolis is a must-see. Finally, keep in mind the State Department issued a travel warning in August 2016 reminding travelers the U.S. does not have diplomatic or consular relations with Iran, so services and protection within the country are not guaranteed.

Prior to 2012, Myanmar, formerly Burma, welcomed fewer than 1 million visitors annually. Meanwhile, neighboring Thailand welcomed more than 25 million. Myanmar was an automatic no-go because of the oppressive military junta ruling from 1962-2011. After half a century of isolationism, Myanmar may have a lot of catching up to do in terms of infrastructure, but on the bright side, it’s extremely affordable and its beaches are some of the least crowded in Southeast Asia. Still, a Burmese Big Brother may be watching.

“American tourists should assume they—including their email and phones—are under government observation,” cautions Jim Hutton, Chief Security Officer at On Call International and a former special agent with the Department of State’s Bureau of Diplomatic Security. “Since Myanmar is still emerging from a military dictatorship, travelers should take care when discussing politics, if not avoid politics altogether.”

If You Go: “Cash is necessary for most transactions and ATMS are hard to come by,” says Hutton. “If you plan on exchanging U.S. dollars make sure they’re crisp, unmarked bills printed after 2006.” Don’t take photos of service members or military installations and if you’re worried about going alone, try a company like Explore which avoids using junta-owned hotels and tries to minimize customer contact with the government when possible.

Despite what you MAY see on Instagram , Angkor Wat wasn’t always teeming with tourists. Under the Khmer Rouge regime, nearly 2 million people were murdered in Cambodia in the late 1970s, according to BBC estimates. Even in the decades following the genocide, civil unrest was everywhere and the topic of tourism was taboo.

Thanks to the Paris Peace Agreements of 1991, the restoration of the monarchy in 1993 and the death of Pol Pot in 1998, attitudes toward this emerging destination have become more positive and curious. While there were only 118,000 international visitors in 1993, there were more than 4.7 million in 2015. Cambodia boasts thousands of temples in addition to Angkor, the largest religious monument in the world. The food is delicious and relatively cheap, the people are friendly and the stunning scenery is very similar to Thailand.

If You Go: The wet season, May to October, is when Cambodia is most enchanting. While templing in Siem Reap, get tickets to Phare Circus where former street children, graduates of a free school operated by an NGO, perform acrobatics and re-enact their country’s tumultuous history on stage. Another way to give back to Cambodian communities is to travel with Journeys Within, one of the first American-owned boutique hotel owners and philanthropic tour operators in Cambodia. Journeys Within is involved with community projects including improving access to healthcare, education and clean water.

Ever since the New York Times ranked Nicaragua third on its list of 46 places to visit in 2013, people have been calling it the new Costa Rica. But unlike its army-less neighbor, Nicaragua is still recovering from a revolutionary war where thousands were killed. The 1970s and 1980s were marked by extreme political unrest, and it wasn’t until the 1990s that Nicaragua began investing in infrastructure for travelers.

A tourism board was established in 1992, and today, the country is able to boast Nicaragua has some of the lowest crime rates in Central America. Despite its well-rounded allure, Pacific beaches, Caribbean islands, volcanic mountains and colonial cities, Nicaragua has yet to be infiltrated by mass-market tourism. Still, it’s only a matter of time before more Americans realize how easy it is to land in the land of volcanoes and lakes. Direct flights from Miami and Houston take just two and three hours, respectively.

If You Go: After flying into Managua, eat your way through the culinary capital before heading south to Granada, a well-preserved colonial city on the shore of Lake Nicaragua. Continue south until you reach San Juan Del Sur, a growing surfing community on some of the best Pacific Coast real estate. Stay at an eco-lodge like Morgan’s Rock or opt for Mukul, the country’s first luxury resort. Don’t expect Nicaragua to be the new Costa Rica. It’s not. Expect it to be unique experience your parents probably never had.