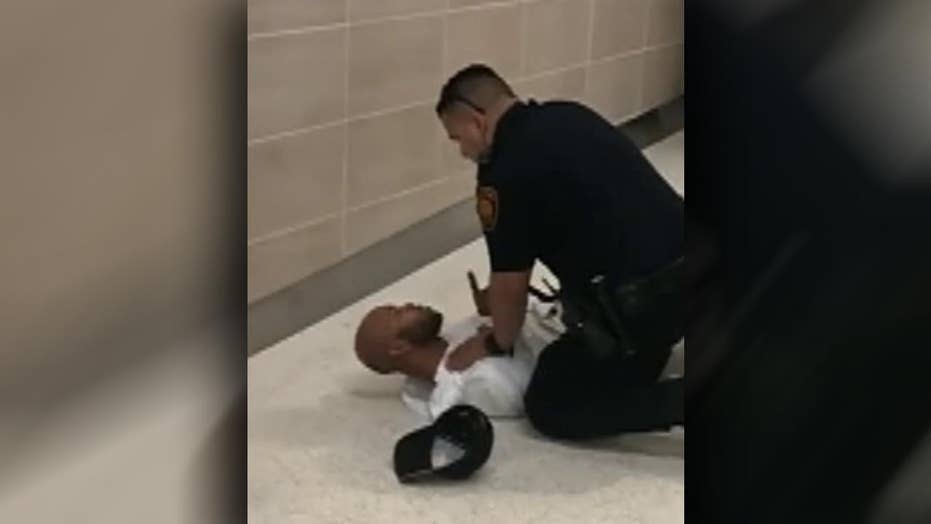 A Frontier Airlines passenger was arrested at a Texas airport after getting into a profanity-laced altercation with flight attendants.

McBee, who recorded the more than two-minute footage of the man yelling inflight, said everyone on the plane could hear the passenger’s outburst.

"You don't want to go sleep, cause what's the guy going to do?” said McBee to News4. “You hope security did their job."

An officer wrestled an irate passenger to the ground after he started yelling about his child. (Clifton McBee)

The man was placed in handcuffs and escorted off the plane by police officers.

In the cellphone video taken by McBee, the man continues to scream and yell obscenities in the terminal. At one point the man becomes upset asking about his five-year-old child and the police officer tackles him to the ground to keep him still until more officers arrive.

“It seemed like the more people that were around, the angrier he got,” said McBee to News4. “It seemed like he wanted to put on a show for everybody.”

The man can be heard screaming at officers about his son. He also repeatedly informed officers that they were hurting “his surgery,” and claimed that he had bullets in his body that were causing him discomfort.

“Sir, I’m disabled, I’ve got bullets in my f---ing body, and I’m f---ing hurt,” he said to the officer, before turning his head to yell at bystanders.

It was reported that “authorities took care of the child,” when the man was taken off the flight.

The man continued to berate officers once he was on the ground. (Clifton McBee)

According to the San Antonio Police Department, the man was taken into custody and later transported to a mental health facility for evaluation, News4 reports.

It is unclear what prompted the man’s verbal attack. The FBI is currently investigating the incident.

Frontier Airlines confirmed the incident to Fox News and are cooperating with the investigation.

“Safety is the top priority at Frontier Airlines and we have zero tolerance for anything that threatens the security of our customers or crew. A passenger became disruptive during flight 1144 from Las Vegas to San Antonio on August 30. Police arrested the passenger upon landing in San Antonio. The FBI was investigating because part of the incident occurred inflight. Out of respect for the investigation, we defer to the FBI for any further details," Frontier said in a statement to Fox News.

Clifton McBee did not immediately respond to Fox News request for comment.