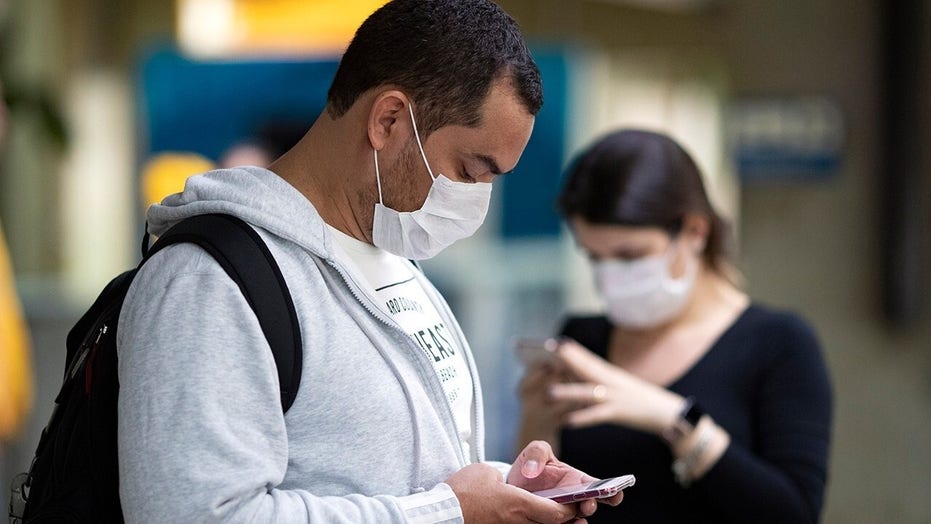 Passengers aboard the Norwegian Jewel cruise ship began disembarking in Hawaii on Monday after being at sea for nearly a month. The Norwegian Cruise Line ship had been turned away from several ports due to COVID-19 concerns, though there were no confirmed cases of the coronavirus among the 3,000 people on board the ocean liner, the Hawaii Department of Transportation said.

The Norwegian Jewel docked in Honolulu's harbor on Sunday afternoon after departing Sydney, Australia, on Feb. 28 for what was scheduled to be a 23-day cruise of Australia and French Polynesia, the Honolulu Star-Advertiser and The Associated Press report.

The Norwegian Jewel cruise ship docks at Honolulu Harbor on March 22. The cruise ship that had to cut short its trip because of the new coronavirus and mechanical problems docked Sunday in Honolulu's harbor. (Cindy Ellen Russell/Honolulu Star-Advertiser via AP)

The Jewel was forced to adjust its itinerary because of the coronavirus and mechanical problems, after the ship began experiencing problems with its propulsion.

Though there were no suspected confirmed cases of COVID-19 among the ship's roughly 2,000 passengers and 1,000 crew members, according to the transportation department, the Jewel cut its plans short because many ports were closed due to the global outbreak of the viral disease, Norwegian Cruise Line said in a statement.

Two people look out from the Norwegian Jewel cruise ship in Honolulu on March 23. Passengers from the cruise ship that was turned away from other ports before arriving in Hawaii are being taken to Honolulu airport for chartered flights home. (AP Photo/Caleb Jones)

Turned away from Fiji and New Zealand, the cruise ship refueled in American Samoa but passengers were not allowed to disembark in the Port of Pago Pago.

The Jewel sailed on to Hawaii so that guests could disembark and fly home, but residents of the Aloha State complained and even threatened to block the ship from arriving, the Star-Advertiser reports. Hawaiian officials then rolled back their initial offer of disembarkation and said that the cruise ship could only refuel and restock supplies, before changing course again and allowing the Jewel to dock in Honolulu because the vessel needed repairs.

The repairs to the Jewel must be made without passengers aboard, the state's Department of Transportation said.

A woman, bottom left, looks out from the Norwegian Jewel cruise ship in Honolulu on March 22. (AP Photo/Caleb Jones)

On Monday, passengers were photographed walking on the cruise ship’s decks and lounging in chairs on the massive ship’s decks.

Charter flights have been arranged to ship passengers on Monday and Tuesday from Honolulu to Los Angeles; Sydney; London; Vancouver, British Columbia; and Frankfurt, Germany, the cruise line said.

As for the disembarkation process, all passengers will receive an “enhanced medical screening” before traveling home, the cruise line said in the March 23 statement. The Star-Advertiser reports that any guest symptoms of the coronavirus, such as a fever, would be evaluated by doctors. This will continue until Tuesday, until all passengers have disembarked.

“So far there haven’t been any symptomatic passengers at this point,” Tim Sakahara, spokesman for Hawaii’s Department of Transportation, told the Star-Advertiser on Monday.“ At no point will the cruise passengers be with the general public at large.”

About 1,000 crew members will remain on the Jewel, Sakahara said.

The Jewel was the last of Norwegian Cruise Line’s ships aboard at sea with guests during the outbreak, the cruise line said in the statement.

“All ships will soon be berthed in ports around the world until the temporary sailing suspension is lifted,” the company confirmed.

“Please know that we will continue to consult with the World Health Organization (WHO) and the U.S. Centers for Disease Control and Prevention (CDC) to take action as necessary. Our business also relies on the availability and accessibility of ports around the world,” Norwegian Cruise Line said in a statement shared with the Associated Press.

“As such, we will continue to monitor the situation and evaluate the feasibility of redeploying our ships as planned on April 12, 2020.”