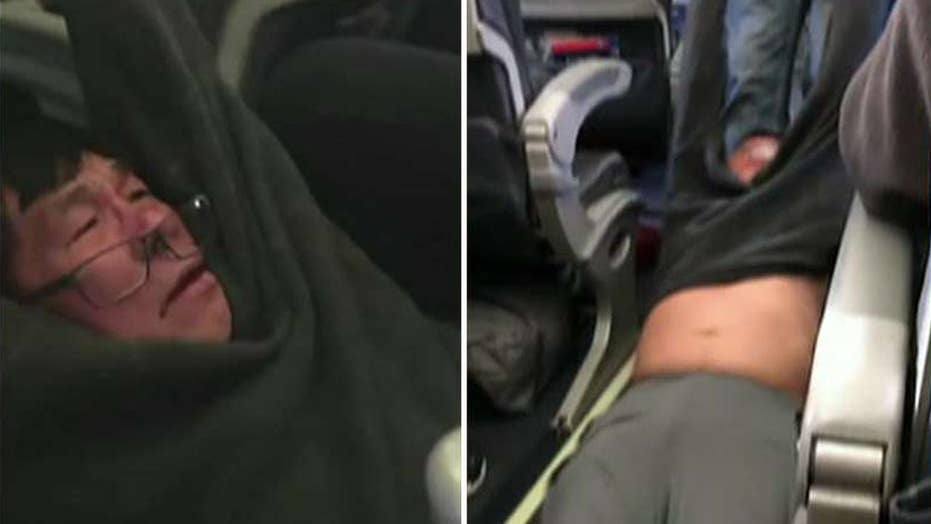 The physician who was dragged off a United Airlines flight in Chicago this month was verbally and physically abusive, and flailing his arms before he lost his balance and struck his mouth on an armrest, according to the aviation officer who pulled the man out of his seat.

The Chicago Department of Aviation on Monday released the officer's report of the incident, in response to a Freedom of Information Act request by The Associated Press. The report reveals for the first time the officer's version of what happened aboard the plane at O'Hare International Airport on April 9.

The incident - which was videotaped by other passengers and widely shared online - became an international embarrassment for both the airlines and the city's aviation department.

UNITED CEO: 'I DEEPLY APOLOGIZE' TO CUSTOMER DRAGGED OFF FLIGHT

The report also includes the name of the officer, James Long, who authorities initially declined to identify.

In the report, Long said he boarded the United Express flight after being called in response to a disturbance involving two people regarding a refusal to leave the aircraft. United has said four passengers had been ordered off the airplane to make room for four employees to fly to Louisville, Ky.

Long said he approached Dr. David Dao to ask the 69-year-old physician to get off the plane. Long said Dao refused and "folded his arms tightly." Long said he reached out to "hold" Dao and was able to pull him away from his window seat on the aircraft and move toward the aisle.

"But suddenly the subject started flailing and fighting," Long wrote.

Dao then knocked Long's hand off his arm, causing the struggling Dao to fall and strike his mouth on an arm rest on the other side of the aisle, according to the report. Long said he then dragged Dao because Dao refused to stand up.

Long said he wrote the report and gave his version of events only because he faced losing his job.

The video taken by a passenger shows lots of screaming coming from behind the seats, then Dao being dragged by his arms down the aisle of the plane as the other passengers react with horror.

In a separate report released Monday, labeled a "Hospitalization Case Report," the Chicago Police Department said Dao was observed striking his face against an armrest as aviation officers "attempted to escort" him from the flight.

Neither report details Dao's injuries, but at a news conference days after the incident, Dao's attorney said the doctor suffered a broken nose and a concussion, and lost two front teeth.

Long said he was able to remove Dao from the airplane. Long said that once off the plane and in the walkway back to the gate, Dao said he was a diabetic, but then got up off the floor and ran back onto the aircraft. Long alleges Dao, while running back to the plane, said they'd have to kill him.

Long and two other aviation officers were subsequently placed on leave by the aviation department.

The report jibes with comments that United CEO Oscar Munoz made in the aftermath of the incident, in which he called Dao belligerent. Munoz later offered a more emphatic mea culpa, saying: "No one should ever be mistreated this way."

The aviation department has also profusely apologized and vowed an investigation

The aviation department also released its use of force policy, which was sent to all officers after the incident.It says aviation security personnel should use force only when "reasonably necessary to defend a human life, effect an arrest or control a person," and that the force used "shall only be that which is necessary to overcome the resistance being offered by an offender and to effect lawful objectives."