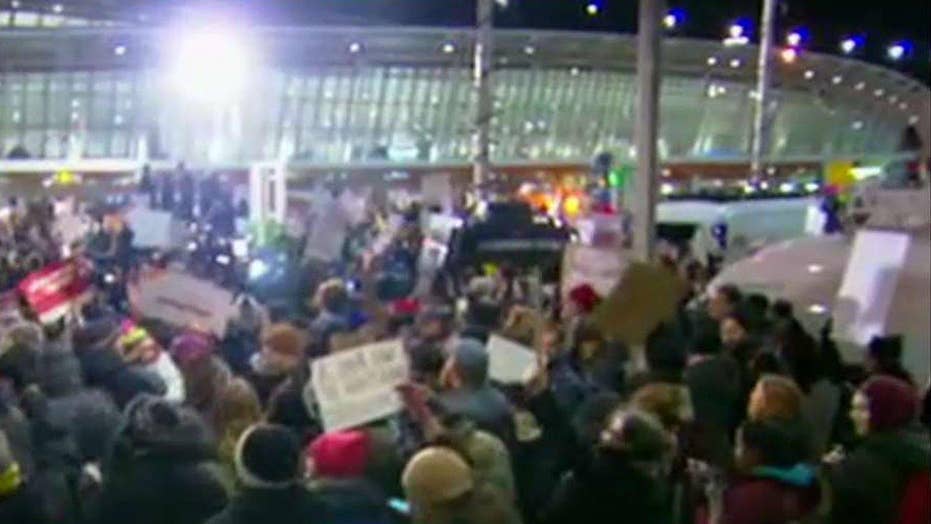 Protests continue to grow outside of JFK airport

Bryan Llenas is following the story

Airports around the country say operations have mostly resumed to normal after a series of protests erupted in response to President Donald Trump’s executive order blocking visitors from seven predominantly Muslim nations.

According to Skift, U.S. carriers did not receive advance notice of the order or information from the government on how to address  passport and visa holders from Iran, Iraq, Libya, Somalia, Sudan, Syria and Yemen—even those who are lawful U.S. citizens.

Despite the immigration confusion, several airport officials confirmed to Fox News Monday that most protests have disbanded and fliers should proceed with travel as booked.

Despite the dramatic protests that made headlines over the weekend, many airport officials say there were few, if any, reports of travel delays and, by Monday morning activity at arrival and departure terminals was proceeding without incident throughout the country.

San Francisco International Airport spokesman Doug Yakel said that as of Monday, there were no reports of passengers missing flights, all security checkpoints were open and there are no delayed flights.

At Philadelphia International Airport (PHL), congested lanes brought traffic to a halt on the airport ramps, reportedly causing a few people to miss flights on Sunday. By Monday, however, Mary Flannery, PHL’s marketing and public affairs manager, told Fox News that there were no demonstrations being held and airport operations had resumed without incident.

Due to today’s protest, there will be 2 locations to accommodate the demonstrators in #ATL Airport Domestic and International Terminals. pic.twitter.com/OGTOkf5yJw

In the New York City-metro area, people flying out of or into Newark Liberty International Airport or John F. Kennedy were advised to contact their individual carrier over the weekend and noted that traffic was higher than usual. On Monday Port Authority's Cheryl Ann Albiez told Fox News that “today, it’s pretty quiet at most airports.” She noted that protesters over the weekend were “very calm” and aside from one arrest, all demonstrators listened to law enforcement officials when asked to make way for travelers.

When asked if the Port Authority was advising fliers to allow extra time, Albiez said, “We always say that. It is New York City, so you never know but so far it’s been fine today.”

On Saturday, airlines released official statements regarding Trump’s order. Many are offering affected customers the chance to rebook travel, will waive change fees or permit refunds.

“Effective immediately and until further notice, due to an executive order, the U.S. Department of State has revoked immigrant and non-immigrant visas for travelers to the United States from Iran, Iraq, Libya, Somalia, Sudan, Syria and Yemen,” United Airlines alerted fliers Saturday noting that anyone affected should contact the airline directly to make other arrangements.

British Airways is offering affected customers “a refund for their travel to the U.S.” and will give passengers the option of rebooking flights.

Emirates, which was forced to quickly change pilot and flight attendant rosters on U.S.-bound routes following Trump’s order, issued the following statement, “A very small number of our passengers traveling were affected by the new U.S. immigration entry requirements implemented by the U.S. Customs and Border Protection today.” According to Reuters, a spokesman for Abu Dhabi’s Etihad Airways said the airline had “taken steps to ensure there will be no issues for flights departing over the coming weeks,” and does not expect major travel disruptions this week.

Delta Air Lines said it was in the process of contacting customers affected by the travel restriction for rebooking and, where necessary, to issue refunds. However, the airline found itself dealing with a major IT outage that caused the cancelation of 170 flights Sunday. The problem forced agents to check in passengers manually and left some planes stranded on the tarmac for hours.

On Monday, the Atlanta-based carrier reported that while its essential information systems had been restored late Sunday, operations were still getting back to normal and cancelled 110 flights.