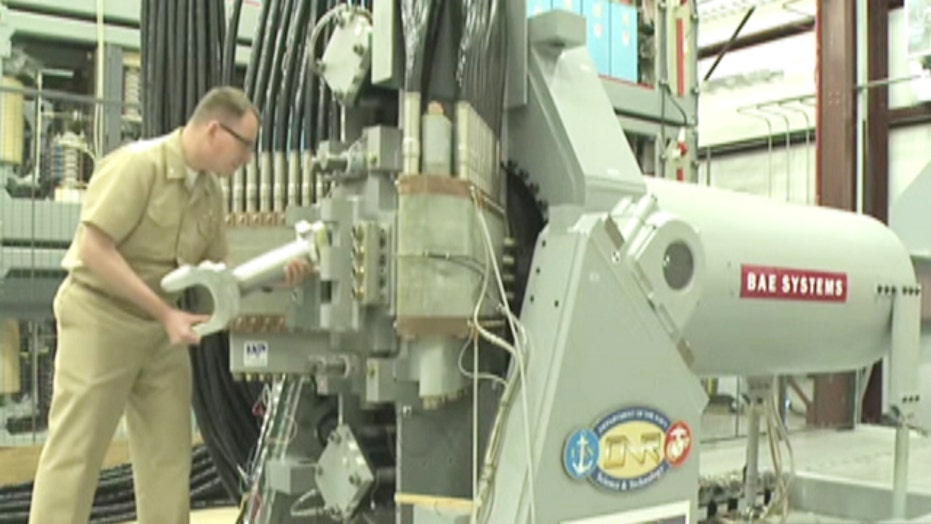 The Navy and Marine Corps’ new ‘Star Wars’-style weapon made its debut in the nation’s capital this week.

The Electromagnetic Railgun, developed by the Office of Naval Research (ONR) with BAE Systems, has the potential to revolutionize naval warfare.

The weapon was on display to the public for the first time at the Naval Future Force Science and Technology EXPO at the Walter E. Washington Convention Center in Washington, D.C. Wednesday and Thursday. The biennial event showcases the latest advances in power projection and force protection, including this year’s star - the EM Railgun.

The EM Railgun is one immensely powerful weapon.

The EM Railgun launcher is a long-range weapon that uses electromagnetic energy, instead of conventional chemical propellants, to fire projectiles.

The ship generates electricity and this electricity is stored over several seconds in the pulsed power system and an electric pulse is sent to the railgun.

It gets its name from its use of rails. High electrical currents accelerate a sliding metal conductor between two rails and this creates magnetic fields to launch projectiles.

The electromagnetic force is so powerful that it launches the projectile up to Mach 6, firing projectiles farther and faster than current options. These projectiles reach an amazing 4,500 mph and precisely hit targets more than 100 miles away.

Mach 6 is more than six times the speed of sound.

To put how fast that is in context, Lockheed Martin’s Skunk Works has built the fastest manned airplane, the Blackbird, and that flies around Mach 3.

Once launched, the projectile uses its extreme speed, the kinetic energy, rather than conventional explosives to destroy targets on land, at sea or in the air.

And to put the improved distance in perspective, the current Mk 45 naval gun mount has a range of about 13 nautical miles with conventional ammunition.

What does it fire?

With ONR, BAE Systems is developing the next-generation HVP, Hyper Velocity Projectile, that can be fired by the EM Railgun and future models of railguns.

The HVP will also be compatible with current weapons systems like the Navy 5-Inch Mk 45, and Navy, Marine Corps, and Army 155-mm Tube Artillery systems.

It’s designed to be a guided projectile with low drag for high-velocity, maneuverability and decreased time-to-target. It has advanced guidance electronics and in flight, the HVP will be 24 inches long and weigh 28 pounds. The ammunition will be easy to handle and transport.

What are the advantages?

Railguns are a smart alternative to current large artillery and this weapon represents significant advances in U.S. Navy and Marine Corps capabilities.

Since this system that does not use gunpowder or propellant to fire the projectile, it reduces the need for high explosives to be carried on ships and the related hazards in doing so.

Off the ship, the EM Railgun will improve safety as well. Since it uses its extreme speed on impact, the danger of unexploded ordnance on the battlefield will be reduced.

Another key advantage is cost. Railgun projectiles are a mere fraction of the cost of those currently used in missile engagements – possibly even one percent of the cost of today’s missile systems.

Achieving this “Star Wars” - style weapon has not been easy. For years, many programs have sought to build such a powerful weapon, but a design that works, and works on a practical level, has been incredibly difficult to crack. Generating the power necessary to accelerate rail gun projectiles and creating materials capable of resisting the extreme temperatures generated are just two of the enormous obstacles a successful railgun needs to overcome.

Development of ONR’s Electromagnetic Railgun began about ten years ago. Phase I focused on developing the launcher, pulsed power, and risk reduction for the projectile. In 2012, Phase II began further advancing the technology, such as a firing rate of 10 rounds per minute.

The railgun program continues to perform impressively and is on track for its scheduled at-sea testing next year.